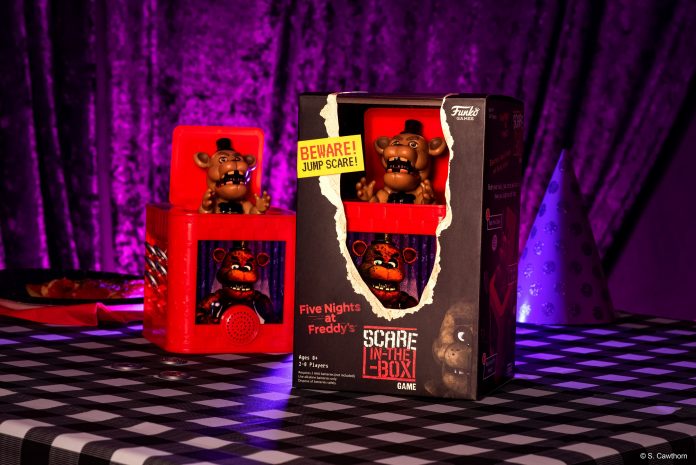 Funko has found a way to bring the iconic jump scares from the Five Nights at Freddy’s franchise to your onto your table with friends.

What do you get when you combine an old jack-in-the-box mechanism with roulette? Well, I imagine it you’d get Funko’s new game! Announced this morning (and set to debut at PAX Unplugged this weekend), Five Nights at Freddy’s Scare-in-the-Box Game is set to launch at retailers this January:

The team at Funko Games is bringing the iconic Five Nights at Freddy’s jump scares off the screen and into your hands with the just-announced Five Nights at Freddy’s Scare-in-the-Box Game! The game recreates the series’ edge-of-your-seat suspense by mixing classic roulette with a frightening Freddy-Fazbear-turned-jack-in-the-box.

Players pass the box around and can choose to either turn the crank and tempt fate or play pass tokens to skip their turn and play it safe. Should they fall into Freddy’s clutches, players have a chance to use scare tokens to try and steal the win from remaining players. Creepy music and sound effects help bring the Five Nights at Freddy’s atmosphere to life, as players compete to be the last person to survive.