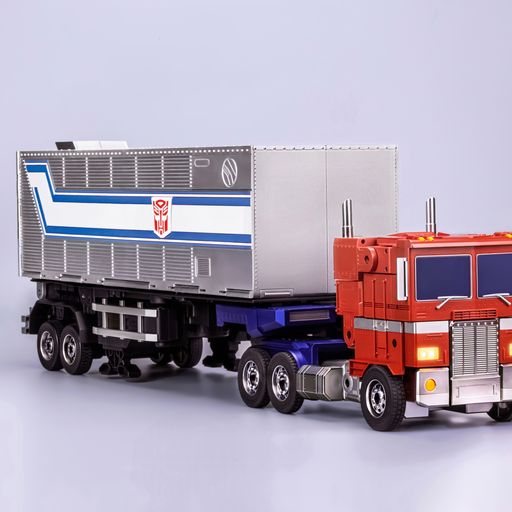 Hasbro has announced a new addition to their incredible Optimus Prime robot toy, an addition that makes the iconic Transformer more complete.

Remember that ridiculously awesome Transformer toy revealed last year (almost exactly a year ago), that was able to be programmed, auto-transformed, and followed your voice commands? Well, now it’s getting even better.

Today, Hasbro and Robosen Robotics have announced a companion piece that brings Optimus’ iconic trailer to life like never before. Coming in a three feet long and featuring the same impressive auto-converting abilities, it’s definitely something collectors who have the Optimus Prime will want to pick up as well:

Following last year’s launch of the Flagship TRANSFORMERS Optimus Prime Auto-Converting Programmable Advanced Robot, Robosen Robotics (Shenzhen) Co. Ltd, a leading innovator in the field of robotics, in collaboration with Hasbro, announced the TRANSFORMERS Optimus Prime Auto-Converting Trailer with Roller – Collector’s Edition for the Flagship Optimus Prime, the most advanced and programmable TRANSFORMERS robot ever created. This new companion piece is modeled after the original G1 design, and measures an impressive 3 feet in length. The Trailer and autonomous Roller expands the users’ arsenal to defend against the Decepticons and create the ultimate, auto-converting, Optimus Prime experience ever to launch.

The Flagship Trailer and Roller Set comes with a protective storage case with a handle for easy transportation, along with the Limited Edition Collectible Pack, which includes an Individual Serialized Number, Autobot Magnetic Car Badge, Metal Challenge Coin, and Sticker Pack. It is available for pre-order now at LINK to Robosen, at HasbroPulse.com, and retails for $749.99 USD.

Backup has arrived, and the Flagship Trailer and Roller Set creates an immersive, interactive experience for owners of the Flagship TRANSFORMERS Optimus Prime Auto-Converting Robot (sold separately). The Trailer auto-converts into battle mode by folding open and pivoting upwards to shield and expose its massive firepower with an integrated articulating sentry blaster. Stationed inside, Roller awaits your command to explore and engage the enemy, all via app control, along with human sidekick, Spike, who is ready to jump into action or enjoy the ride. Optimus Prime’s blaster can also be mounted for further firepower and support. Connect your TRANSFORMERS Optimus Prime Auto-Converting Robot with the Trailer and control via app or voice for the most authentic, awe-inspiring Transformers experience.

A simple voice command opens the Trailer’s rear swing doors exposing the automatic lift gate, which Roller can drive up and down, and Optimus Prime can seamlessly tow the Trailer with the integrated fifth wheel coupling that easily attaches while operating in truck mode for a quick and realistic connection. Various battle modes stage Optimus Prime and Trailer in full combat and defensive positions and the Trailer can open while Optimus Prime tows via truck mode, exposing the sentry weapons to fire on the Decepticons during the chase.

Using their proprietary servo motor technology, the Trailer and Roller Set auto-converts in seconds and as with all Robosen products, the Trailer and Roller set is meticulously designed and crafted with state-of-the-art, high-grade metal alloy parts, combining classic industrial design with the most cutting-edge robotic technology, while providing an ultimate entertaining experience filled with programming, and pure fun. The Trailer and Roller Set package includes a protective storage case with handle for easy transportation, along with the Limited Edition Collectible Pack, which includes: Individual Serialized Number, Autobot Magnetic Car Badge, Metal Challenge Coin, and Sticker Pack!

Even better, if you missed out on the Optimus Prime toy when it launched last year, Hasbro has a limited number back in stock that you can order starting today for $749.00. The trailer is available to order now via Robosen’s site or through HasbroPulse.