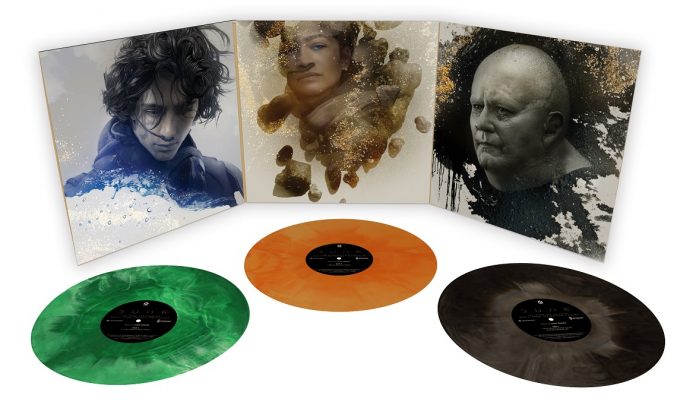 Dune fans, and those looking forward to the new film, will want to get their hands on this swanky new limited edition LP Vinyl.

Not that Mondo needs any more of my money, but it sure looks like they’re about to get it! They’ve announced The Dune Sketchbook limited edition Vinyl. The set, which includes Hans Zimmer’s score for the film (as well as several extended suites for fans to enjoy), launches TOMORROW, Wednesday, 10/13 at 12PM CT.

Split across three exquisite colored vinyl records, these extended suites from Denis Villeneuve’s epic blockbuster, DUNE, are breathtaking in their scope and vision, both beautiful and dynamic.

Our edition is a one-off pressing of 3000 copies, featuring incredible artwork from Greg Ruth, approved by both the composer and director. The tri-fold sleeve is foil stamped with the film’s logo and each copy is numbered. Don’t miss out on one of our favorite releases of the year.

‘The Dune Sketchbook’ clocks in at an impressive 100 minutes across a mere nine tracks. It features all of Hans Zimmer’s typical bombast and deafening drums. These extended cues feature huge swathes of arpeggiated synths, vocal chants and rumbling bagpipes, moods run from ethereal to ominous, wistful to sorrowful and always become huge dramatic, loud and disorientating (sometimes all within the same cue). It truly is an epic for our times, and proves once again Hans Zimmer’s status as one of the world’s greatest living composers.

At only $45 and limited to only 3,000, you’ll definitely want to get your order in ASAP. If that’s not enough for you, they’ll be launching three new Dune movie posters on Thursday:

Be sure to bookmark the Mondo Shop so you can pick these up this week!