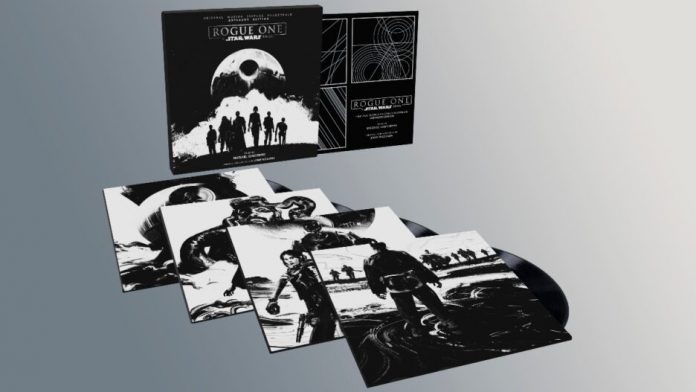 Fans of Rogue One will soon have something new to add to their collections: an expanded version of the soundtrack is being released on vinyl by Mondo.

While Rogue One remains a polarizing film among Star Wars fans over five years after its release, it maintains a dedicated core of fans who love everything about the film, including its soundtrack, the first in Star Wars history to be created by someone other than John Williams.

Fans of Michael Giacchino’s score for Rogue One will soon have something wonderful to look forward to: Mondo is releasing an expanded version of the Rogue One soundtrack on a 4-LP set, featuring over an hour of extra music that didn’t make it into the original soundtrack release.

“It’s no secret that we at Mondo love working with composer Michael Giacchino, and we are thrilled to be releasing a 4-LP set for Rogue One: A Star Wars Story with our friends at Walt Disney Records,” Mondo Music Creative Director Spencer Hickman shared in a statement. “A firm fan-favorite bridging the gap between old and new Star Wars, Michael’s score is phenomenal, featuring nods to John Williams’ classic Star Wars scores whilst firmly being its own thing. A muscular, epic score loaded with emotion and pathos, we present here not only the entire score but an entire hour of previously unheard material, all housed inside a stunning package from artist John Powell.”

DISC ONE – Side One

DISC ONE – Side Two

DISC TWO – Side One

DISC THREE – Side One

DISC FOUR – Side One

This vinyl collection retails for $75 and can be pre-ordered from Mondo starting February 16, 2022. Will you be ordering a copy?