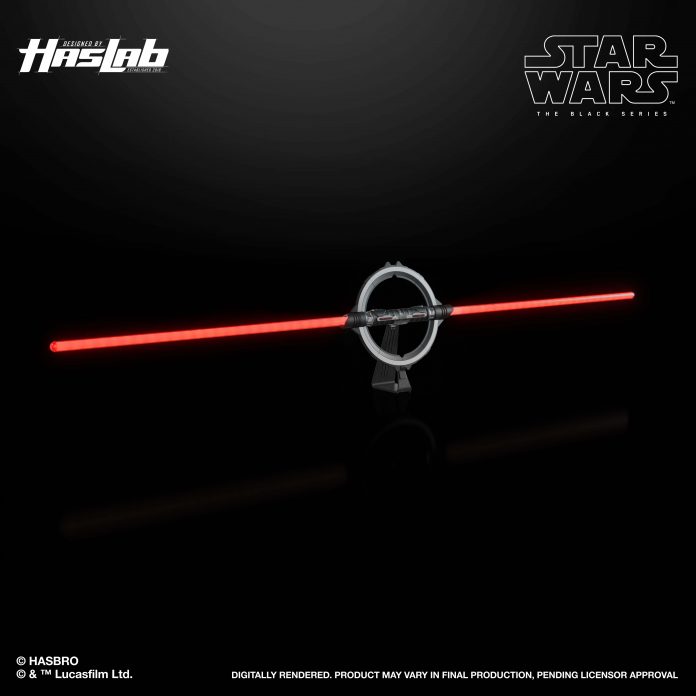 While the last Star Wars HasLab project didn’t meet it’s goal, Hasbro has a new offering for fans. For the first time, they’re bringing the Force FX Elite Lightsaber series to the crowdfunding project with a massive reproduction of Reva’s Inquisitor blade:

The Black Series’ first integrated double-bladed Force FX Elite LIGHTSABER™. This roleplay item comes with the features you love—including progressive ignition, blaster deflect, battle clash effect, and more. With the coordinated attack technology in the hilt and both blades installed, LED animation and effect sequences play out across the entire 6.5 feet lightsaber!

Coordinated attack technology: Combining advanced LEDs and entertainment-inspired sound effects that can be applied across two integrated blades, the Inquisitor Reva LIGHTSABER™ is the most dynamic Force FX lightsaber yet.
Unique form factor: This lightsaber features both half- and full-circle configuration—complete with lights and sound effects—based on the Inquisitors’ iconic lightsabers featured in the live-action Star Wars series Obi-Wan Kenobi streaming on Disney+
Size: With both blades attached, this massive lightsaber measures over 6.5 feet long!
Detailing: Down to the smallest details, we’ve designed an official double-bladed lightsaber like the ones you’ve seen across Star Wars entertainment—from its bright red light effects to its beveled hilt.
Includes display stand: Proudly display this lightsaber on the included metallic grey stand.
Includes rechargeable battery—so you’ll have enough power to imagine thrilling adventures on the go.

Crowdfunding for this project is open NOW (going for $500), and will run through July 11th, where it will need at least 5,000 backers to go into production. Head on over to the HasLab site in order to get more information, check out some videos of it in action, and place your order!