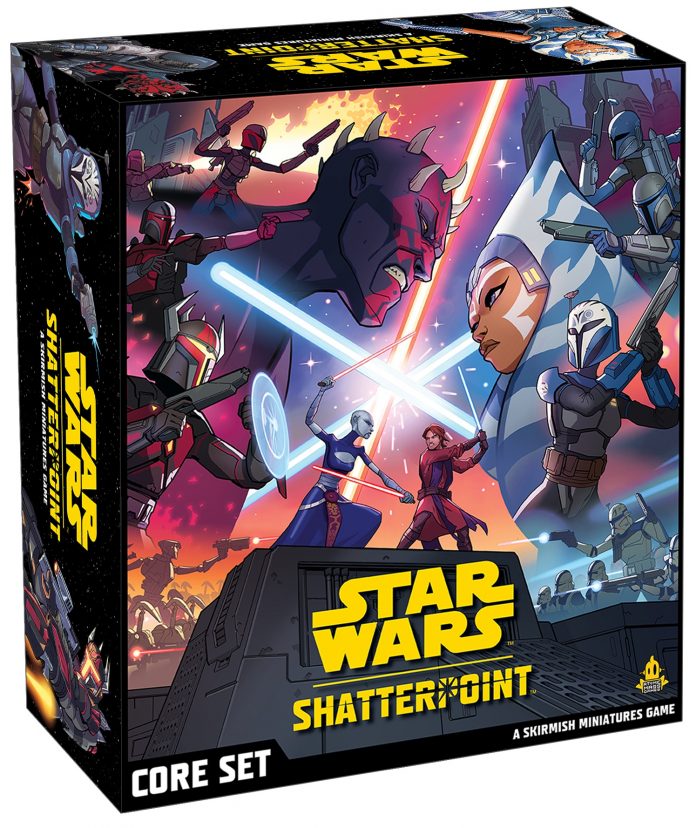 Star Wars fans and tabletop gamers will have a brand new miniature game to play next Summer with the arrival of Star Wars: Shatterpoint!

As if Asmodee doesn’t have enough of my money, today they’ve announced a new Star Wars miniature game (with Atomic Mass Games) called Shatterpoint. No, this isn’t connected to the old Legends novel of the same name, but DOES look incredible. I mean, they put my main man, Darth Maul, on the box! I have to get it.

The Star Wars: Shatterpoint game empowers players to alter the fate of the galaxy, from the Core Worlds to the Outer Rim. Players build and command a strike team composed of iconic Star Wars characters and pit them against each other in exciting battles.

Customize: Create a Star Wars squad that is truly unique with beautifully sculpted and dynamic miniatures of identifiable Star Wars characters that are ideal for dedicated hobbyists and new painters alike.

Strategize: The Shatterpoint game’s fun and flexible squad-building experience invites players to create custom strike teams optimized to complete the various mission objectives. Players can choose thematic squads straight from the Star Wars galaxy, like Ahsoka TanoTM and Bo-Katan KryzeTM, Lord MaulTM and his loyalist super commandos, or mix and match their favorite characters to form the custom squads they want to play.

Battle: In the Shatterpoint game, players use their characters’ special abilities and diverse combat skills to control the flow of battle as they race against each other to complete dynamically evolving mission objectives.

“The design and development of the Star Wars: Shatterpoint miniatures game is really our love letter to the excitement and energy of being a kid on Saturday mornings,” said Will Shick, director of product development at AMG. “We wanted to take all the great things about Star Wars—the action, the adventure, and the iconic characters—to create a Star Wars miniatures game experience that felt like it had come straight out of the animated lineups of the ’80s and ’90s. To say it was a dream come true to work with such a talented group of artists, sculptors, and our awesome team at Lucasfilm to create new versions of the iconic Star Wars cast in this style would be a complete understatement.”

Everything about this sounds pretty fun, as well as something that could serve as an introduction to these kinds of games for newcomers. The only problem now is we have to wait.

Star Wars: Shatterpoint is expected to launch in June 2023.