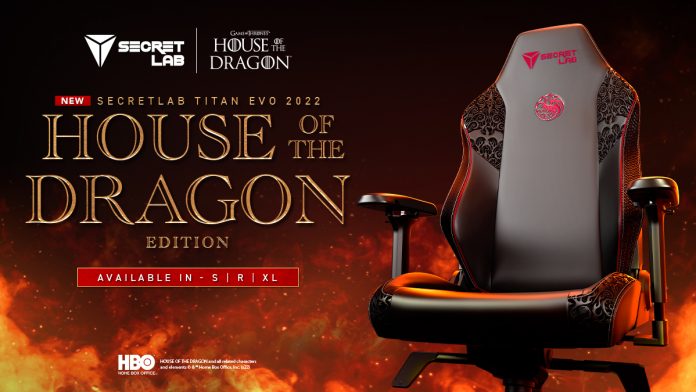 Following the premiere of House of the Dragon, Secretlab has unveiled their latest partnership with Warner Bros to celebrate the Game of Thrones spin-off.

If you’ve had your eye on a Secretlabs chair, but haven’t made the jump just yet, perhaps their latest addition to their Game of Thrones collection will convince you. Inspired by the spin-off series, House of the Dragon, the latest TITAN Evo chair is a pretty great way to show off your fandom in style (and comfort).

Following the wildly popular House Stark, Lannister and Targaryen chairs, and the exclusive Iron Anniversary Edition chair, Warner Bros. Consumer Products have once again teamed up with award-winning gaming chair manufacturer Secretlab to create the Secretlab TITAN Evo 2022 House of the Dragon Edition chair — a special homage to the Targaryens just in time for the launch of HBO’s House of the Dragon, the successor series to Game of Thrones.

HBO’s Game of Thrones has aired in over 207 countries and territories, culminating in record-setting ratings, and over its eight seasons, the show became one of the biggest and most iconic series in television history. Having celebrated “The Iron Anniversary” in April 2021, which marked ten years since the first episode hit television screens, the Game of Thrones franchise continues to engage passionate fans and ignite audiences’ excitement with the next iteration, House of the Dragon.

Embellished with elaborate dragon scale leather which was specially designed for the Secretlab House of the Dragon Edition, the chair is an ode to the Targaryens at the peak of their power in Dragonstone, the ancestral seat of House Targaryen. Their sigil is stitched on the front and back of the backrest in intricate red and white embroidery with the regal silhouette of dragons outlined on its side wings, a fitting nod to the majestic creatures that marked the Targaryen dynasty. This chair will be the latest addition to the Secretlab Game of Thrones Collection, which sold out within days at launch, and had pre-orders booked up for months after it was brought back by popular demand.

Built on the award-winning Secretlab TITAN Evo 2022, the House of the Dragon Edition is available in sizes Small, Regular and XL, in extremely limited quantities. To learn more about the chair, or get your pre-order in, be sure to head to Secretlab’s official site.