I need this.  Despite the fact that I do my best to keep my toy purchases limited to my Star Wars collection (otherwise there’s NO room in my house), I can’t help but pine for this new LEGO set.  While eager collectors have spotted this previously, today brings the official confirmation from LEGO…and it looks better than any of us could have imagined.  Here’s what all it comes with:

Help Batman and Robin to drive the villain intruders from the Batcave, featuring a Bat Lab with Batcomputer, plus the Batmobile with stud shooters, Batcopter with flick missiles and the Batcycle. This special model, based on the classic 1960s TV show, also has a Wayne Manor section with an exterior wall to climb on and Bruce Wayne’s study featuring the iconic Batphone and a false bookcase that slides open to reveal the secret entrance to the Batcave. Before spiraling down the Batpoles into the Batcave, change identity from Bruce Wayne™ and Dick Grayson™ into Batman and Robin (separate minifigures included).

• This LEGO® model of the Batcave as seen in the classic 1960s TV series features 2 Batpoles for Batman™ and Robin™ to slide down, a selection of Bat-gadgets, helipad, plus a Batmobile and Batcopter.

• The Wayne Manor section of the model features Bruce Wayne’s study with the iconic Batphone, a hinged Shakespeare bust with secret button underneath, sliding false bookcase to access the Batpoles, and assorted elements including decorated wallpaper bricks, wall lamps, framed portraits, a framed fish and trophies. It also includes an exterior wall for climbing, with an opening roof for easy access to the Batpoles and an aerial element.

• The Batcave incorporates a hi-tech, 2-floor Bat Lab with Batcomputer element and a variety of detachable accessory elements, including a lie detector machine, table, chest of drawers, Bat-gadgets and test tubes with translucent elements. Also includes the iconic Batcave entrance for the Batmobile and a helipad for the Batcopter.

• The Batcopter has an opening cockpit for a minifigure, bat-inspired wings with 2 flick missiles, spinning rotors and a spinning propeller. A villain minifigure can grab onto the back of the Batcopter for more aerial battle action.

• The Batcycle features a driver’s seat for Batman™, translucent headlight element and a sidecar for Robin™.

That’s a whole bunch of awesome packed into one set and it’ll cost fans about $269 to snag.  Considering all it comes with and the nature of the set itself, I think it’s safe to assume that many fans would be more than happy to shell out for it.  The Batman Classic TV Series Batcave will hit stores in March; will you be picking one up?

LEGO Super Mario is Not Your Average Playset 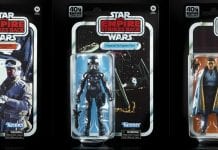