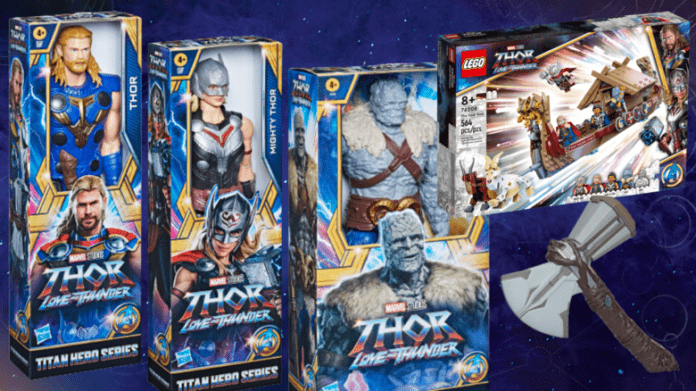 During Good Morning America, Marvel fans were given their first look at some upcoming toys for Marvel’s Thor: Love and Thunder.

While we haven’t seen a trailer just yet, Marvel fans are still getting their first look at Thor: Love and Thunder thanks to some official toy reveals. This morning brought our first look at some role-play/action figures from Hasbro, along with a LEGO set based on the upcoming film. Though it’s not the same as official images, these toys DO give us our first real look at Jane Foster’s (Natalie Portman) Mighty Thor:

What’s interesting in these, is we also see that Mjolnir has been rebuilt. Not sure how that happens after its destruction, but it’s cool to see the previously destroyed one is back in use (Captain America already returned the one from Endgame). On top of that, LEGO gives us a look at the GOAT BOAT.

Though it’s in minifig form, this is our first look at the villainous Gorr the God Butcher, played by Christian Bale. With the reveal of these new figures, and the movie just a couple months after Doctor Strange 2 (which has marketing in full swing), hopefully we’ll be getting a Thor: Love and Thunder trailer in the not too distant future.

In the meantime, what do you think about Mighty Thor’s look in the film? Thor: Love and Thunder will hit theaters on July 8, 2022.