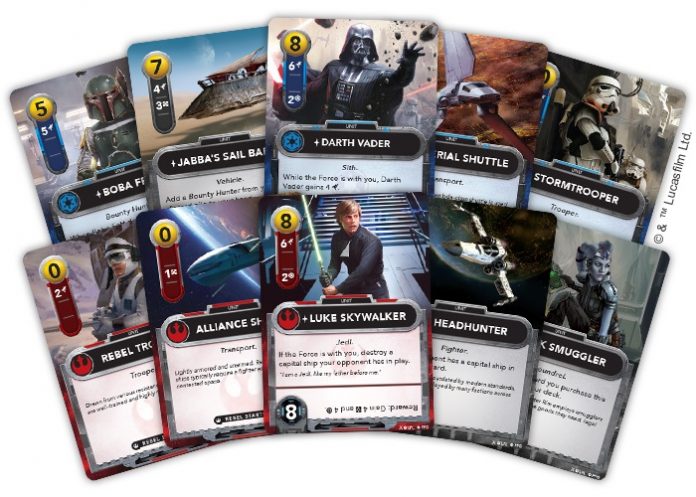 Asmodee and Fantasy Flight games are bringing Star Wars fans a new card game, pitting the Rebels against the Empire in deckbuilding fun!

I love Star Wars and I love card games. I specifically enjoy deckbuilding card games because they capture that feel of the CCG/TCGs I loved when I was younger, in a much faster pace. As such, I’m super excited to see Star Wars is getting in on the action with Asmodee and Fantasy Flight’s Star Wars: The Deckbuilding Game!

The Rebel Alliance fights valiantly against the tyranny of the Galactic Empire. Each new victory brings the Rebels hope, and each heroic sacrifice strengthens their resolve. Still, the Empire’s resources are vast, and the firepower of its Empire Navy is unmatched. With neither side willing to accept defeat, their war rages across the galaxy…

This new head-to-head game for two players brings the galaxy-spanning war between the Galactic Empire and the Rebel Alliance to your tabletop. In this easy-to-learn game, you and your opponent each choose a side, playing as either the Empire or the Rebels, and as the game progresses you both strengthen the power of your starting decks and work to destroy each other’s bases. The first player to destroy three of their opponent’s bases wins the game!

Star Wars: The Deckbuilding Game is set to arrive in March 2023.