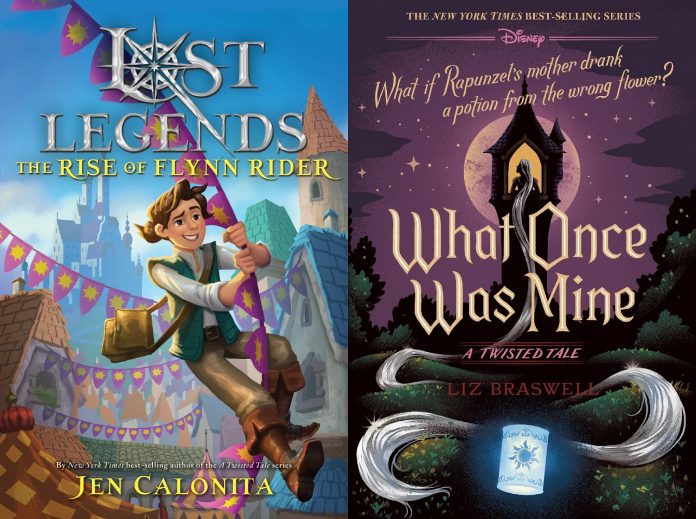 On this episode of Everything is Canon, Steve is talking to authors Liz Braswell and Jen Calonita all about their new Disney books, A Twisted Tale: What Once Was Mine and Lost Legends: The Rise of Flynn Rider respectively.

The 12th book in the Twisted Tales series, What Once Was Mine asks the very simple question, what if Rapunzel’s mother drank a potion from the wrong flower? So that instead of healing properties, Rapunzel’s hair could possibly kill you with just simply by touching it?

Desperate to save the life of their queen and her unborn child, the good people of Corona search for the all-healing Sundrop flower to cure her—but mistakenly acquire the shimmering Moondrop flower instead. Nonetheless it heals the queen, and she delivers a healthy baby girl with hair as silver and gray as the moon. With it comes dangerous magical powers: the power to hurt, not heal. For her safety and the safety of the kingdom, Rapunzel is locked in a tower and put under the care of powerful goodwife, Mother Gothel.

For eighteen years Rapunzel stays locked away, knowing she must protect others from her magical hair. But when she leaves the only home she’s ever known, wanting only to see the floating lights that appear on her birthday, she gets caught up in an adventure across the kingdom with two thieves—a young woman named Gina, and Flynn Rider, a rogue on the run. Before she can reach her happy ending, Rapunzel learns that there may be more to her story, and her magical tresses, than she ever knew.

As for Jen’s book, The Rise of Flynn Rider, she kicks off this new Lost Legends middle grade series with adventure and excitement, giving us the origin story for perhaps Disney’s most loveable roguish hero, Flynn Rider, plus a few other notables you’ll surely recognize.

Twelve- year-old Eugene Fitzherbert needs a plan. It’s not that he doesn’t love his time in the orphanage that raised him—Miss Clare and the boys are his family. As is his best friend, Arnie, with whom he’s often in cahoots, acting out passages from his favorite Flynnigan Rider books, or pretending they’re Lance Archer, the iconic thief who takes from the rich to give to the poor. But Eugene knows that most orphans his age set off to make their own way, and the orphanage already doesn’t have the means to support them all. Besides, he wants to see the world with Arnie, and maybe, just maybe find his parents someday.

So when a traveling circus comes to the kingdom promising a life of adventure, brotherhood, and riches, Eugene jumps at the chance to join them. He even convinces Arnie to come too. But soon it becomes clear that there’s more to this ragtag crew than meets the eye, and they may have a dubious plot in the works. It’ll take new heroes—namely, Flynn Rider and Lance Strongbow, to save the day.

Filled with adventure and fun, the Lost Legends series explores the untold origins of Disney’s most infamous rogue boys.

The three of them talk about the Twisted Tales series and the run that it’s having, what a great year it’s been for the Twisted Sister team, what exactly is Lost Legends, their preferred Rapunzel source material, lots of Flynn Rider, and much, much more.

To order a copy of A Twisted Tale: What Once Was Mine, click HERE!

To order a copy of Lost Legends: The Rise of Flynn Rider, click HERE!

Liz Braswell spent her childhood reading fairy tales, catching frogs, and going on adventures in the woods with her stuffed animals. After making video games for ten years Liz now writes full-time and plays video games for fun. She has written Snow,Rx, The Nine Lives of Chloe King, and several books in the Twisted Tales series, including Part of Your World and As Old as Time. She lives in Brooklyn with her husband, two children, a cat, a part-time dog, and three fish.

Jen Calonita is the author of the award-winning Secrets of My Hollywood Life, the Fairy Tale Reform School series, and three books in Disney’s Twisted Tales series including Mirror, Mirror, Conceal Don’t Feel, and Go the Distance. She lives in New York with her husband, two boys, and two chihuahuas named Captain Jack Sparrow and Ben Kenobi. A huge Disney fan, Jen dreams of moving the whole family into Cinderella”s castle at Walt Disney World.

Everything is Canon
Everything Is Canon: Flynn Rider & Rapunzel Special