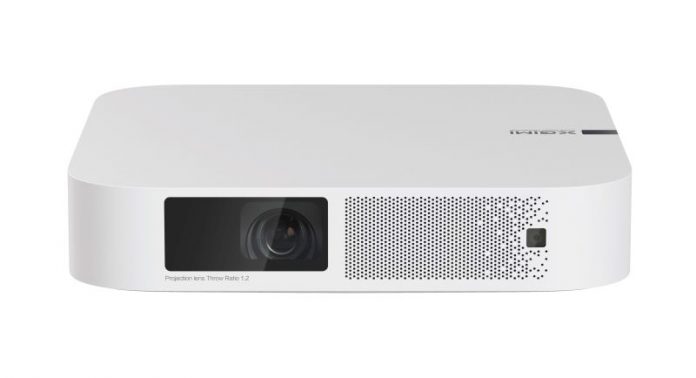 Working as both a portable option/smart TV, XGIMI’s recent Elfin projector makes for an excellent gift option for the nerds on your list and is our latest Pick of the Week!

The Elfin isn’t the first XGIMI projector I’ve had the opportunity to review, and I’m continually impressed with what they’re able to deliver in such tiny packages. Like many of their recent launches, the Elfin is billed as a portable projector that lets you take all the features you want, anywhere you can think of (with a power supply). Unlike the MoGo Pro, which is a more vertical affair, the Elfin takes on a more traditional projector profile.

It’s still not “big” by any stretch of the imagination. The device weighs just a little less than two pounds and only about 2 inches thick all around. Don’t let the smaller size fool you, however, as it manages to still pack in quite a bit of power and quality. The minimalist design still includes an HDMI 2.0 port, USB 2.0 port, and 3.5mm audio jack on the back. So you can plug in everything from a Blu-ray player, just about any gaming console, or even load up a film from a flash drive.

It also features 3W stereo speakers built into it. With how small the overall device is, I was surprised at how solid the speakers sounded. If you’re watching with a bigger group of people, or in a larger space, however, you’ll probably want some external options to go with. For use in your room/living space, however, it’ll work just fine.

Despite its compact nature, the Elfin still manages to hit a bright 800 ANSI Lumens. That’s 500 MORE ANSI Lumens than the MoGo Pro. While it may not be as bright as some of the higher end projectors on the market, it’s still damn impressive, especially considering its size.

I won’t bore you with the nitty gritty details of Lumens/ANSI Lumens, and who they work, but suffice it to say, the brighter the image, the better. For more practical purposes, what it means with the Elfin is that it works really well even without the lights off. So if you wanted to use it in your living room during the day, just to flip channels/watch TV, you absolutely could. It’s bright enough that other ambient light doesn’t wash out the image being projected.

When you do turn off all the lights and use the Elfin in a darkened room, the results are impressive. While it keeps things locked to a 1080P HD resolution, being able to maintain that high level of fidelity even on a 120 inch screen feels incredible. I had mine set up to test in my room, with an actual screen stretched across the wall. It was insane and just like being in a movie theater.

Even as I expanded to the furthest reaches of it’s limits for projecting, the image remained crisp and clear. It’s not easy to get a good picture of what the projector looks like in action, but I think this one does a fairly decent job of showing what you can expect:

Yeah, that’s 120-inches of Dune in my bedroom. I couldn’t imagine a better film to use for my initial test. That’s possible because, like their other portable projectors, the Elfin uses the Android TV 10 operating system. So you can fire this up, connect to your internet, and download all sorts of apps (like HBO Max, Hulu, Disney Plus, etc). This is one of the main things I love about these XGIMI projectors. Even without needing anything else to connect to it, you can still watch/enjoy virtually anything. It’s like having a Smart TV you can carry around with you wherever you go.

Granted, there are some setbacks. For one, it requires you to log-in with a Google account from the start. It’s not a major issue, but even if you only ever plan to use external devices for the projector, you still have to log-in for it to do anything. Again, not a huge issue, but could certainly be a bit frustrating.

On top of that, for some reason, it really does have great support for the Netflix app. There are workarounds, but it feels like a strange oversight considering how important Netflix is to the overall streaming experience. I didn’t have any issues with other streaming apps on the platform, and aside from some minor lag on the remote and Google Assistant voice feature.

In general, “minor” is a good way to describe just about any issue I have with the Elfin. It’s a big frustrating they took the internal battery out of this one, so it has to be connected to a power source at all times. While it’s not a big deal, it certainly detracts a bit from the portable aspect they’re going for.

Otherwise, I really loved the Elfin, even more than the MoGo Pro. It’s sharp enough, with plenty of features that for $650, it’s a solid competitor against many smart TVs. Sure it doesn’t hit 4K, but the size, apps, and ability to move it anywhere you want on a whim works in its favor.

If you’re looking for something to upgrade your setup at home this holiday season, or want to make the movie lover/gamer in your house happy, this is an excellent option.

The Elfin is available now directly from XGIMI and Amazon.