It’s always cool to get a piece of hardware that represents your favorite games, such as special systems and controllers. Razor is doing just that with a new arcade stick made just for Dragon Ball FighterZ. While they haven’t announced a specific release date, they should be coming fairly soon:

Razer, the leading global lifestyle brand for gamers, today unveiled its partnership with Bandai Namco Entertainment and Shueisha, Inc. / Toei Animation to produce a range of arcade fighting sticks for Dragon Ball FighterZ on the Xbox One™ and PlayStation™ 4.

The Razer Atrox Arcade Stick for Xbox One and the Razer Panthera Arcade Stick for PlayStation 4 feature Dragon Ball FighterZ artwork and case design inspired by the global phenomenon that is Dragon Ball. Tested by some of the world’s best esports athletes, these arcade fighting sticks are customizable and constructed with modders and competitive gamers in mind.

Honeycomb structure on the inside for easy screw mounting

Will any of your Dragon Ball FighterZ players be picking this up?

Hands-On With the One By Wacom (Video Review) 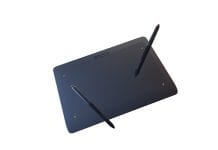