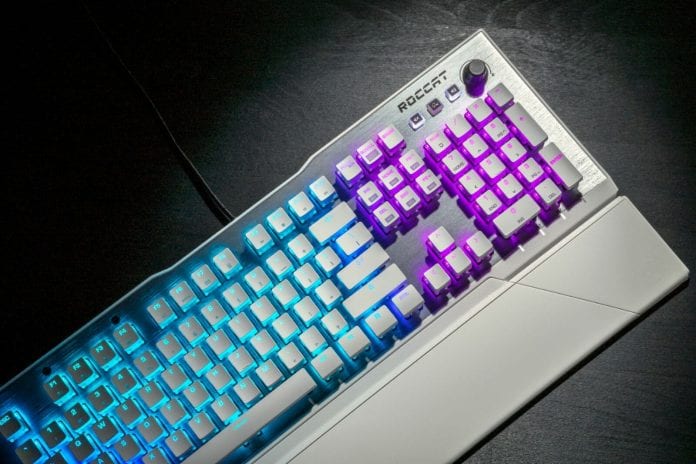 Whether you’re looking to up your PC game with the latest and greatest tech or you’re simply in the market for a better keyboard, it can be really tricky to decide which brand to go with. With a variety of high-quality products available to you, offering all manner of features, oftentimes it’s all about preference.

For me, when I’m looking for gaming tech I want something that’s comfortable, fast, durable, and generally exciting to use. The ROCCAT Vulcan 122 AIMO gaming keyboard checks all those boxes and more. Here’s our review. One of the Most Responsive Gaming Keyboards on the Market

If you’re a budding PC gamer, it’s important to know that having a high-functioning, high-quality gaming keyboard can mean the difference between total victory or crushing defeat. Most consumer-grade keyboards aren’t meant for the rigorous, swift nature of PC gaming. Thus, they often hold back most gamers from achieving desired results.

That realization becomes quite clear from the moment you plug in the ROCCAT Vulcan 122 AIMO gaming keyboard. While the lights jump out at you as a noticeable difference, it’s actually all the things you can’t see that set this gaming keyboard apart from the rest. The Vulcan 122 sports several technological achievements by ROCCAT. Chief among them are the Titan Switch Tactile and Debounced Switch. Both allow the keyboard to be far more responsive than any other consumer-grade and most gaming keyboards I’ve used before.

To begin my stress test of the ROCCAT product, I wanted to test the feel of the keys before in-game application. I started by using several online typing tests to see how my words per minute were affected by the new keyboard. First, I used a consumer-grade keyboard and averaged about 50 words per minute (Look out world!). When I began using the Vulcan 122, I noticed how each key felt faster than the previous keyboard. There’s an apparent bounce in each key, which allows for faster typing. In fact, it’s so fast I took the same typing test with the ROCCAT product and averaged about 59 words per minute. That’s a sizable difference in results.

Attributing factors to this are the Titan Switch Tactile and Debounced Switch, I mentioned before. The Debounced Switch allows the firmware to read keystrokes 20% faster than most keyboards, during actuation. On top of that is the Titan Switch Tactile, which is proprietary technology that ROCCAT developed to create faster, more responsive keystrokes. Due to this, the Vulcan 122 has an actuation point of 1.8mm. It’s not the fastest actuation point you can find on the market today, but it’s no slouch either.

One negative for the ROCCAT Vulcan 122 AIMO’s keys is how noisy they are. This is not a stealthy keyboard AT ALL. Each key makes a very audible click when pressed. This could be the result from the powerful bounceback the Titan Switch Tactile employs. Whatever the reason may be, oftentimes during my test it was all you could hear. If that doesn’t bother you or your significant other then you should have no problems. Alternatively, there are quieter, maybe not as powerful, keyboards out there.

In my gaming test, I put the ROCCAT Vulcan 122 AIMO through the paces with three games: Fortnite, Team Fortress 2, and Apex Legends. The reason why I chose these games is because I’ve found that Shooters tend to require the most out of gaming keyboards.

My findings from these tests were that the Vulcan 122 allowed me to play much faster than I would have with the consumer-grade keyboard I had been using. With its responsive keys and twitchy speed, I was able to navigate the landscapes of each game ridiculously fast. Even for a game like Fortnite, of which I am notoriously bad at, I was able to hold my own relatively well. Moving, switching, and even using items happened almost instantaneously. That said, I didn’t win any games, but that’s more of a reflection of my skill than the keyboard, itself. It can only do so much.

My findings in Team Fortress 2 and Apex Legends achieved the same results from the First-Person Shooter perspective. The twitchy-fast keys made movement extremely smooth and speedy. Switching, reloading, picking up new weapons (Apex Legends) was simple and smooth.

Every test and session I had with the ROCCAT Vulcan 122 AIMO was nothing short of impressive. The uber-responsive keys were a dream to use in both professional and playable applications. At one point, I tried going back to my previous keyboard, but it just felt like I was typing on molasses. The keys were so slow, I had no desire to type without the Vulcan 122. As a result, the ROCCAT product has become a permanent fixture for my rig. My first impression with the ROCCAT Vulcan 122 AIMO was a really good one. Upon first glance, the keyboard sports a beautifully sleek design. The Vulcan 122 AIMO comes in white, which grants a very clean look. As it is white, I did find myself babying it more than I would most keyboards, as to not stain it or make it dirty in any way. That said, because of how the Titan keys are housed and the shortened key-caps, regular maintenance is relatively effortless.

What I also really loved about its design was how it was designed with both comfort and durability in mind. The Vulcan 122 AIMO is angled oh so slightly. In certain vantage points, it almost looks flat, but its slight angle accompanied by the magnetic palm rest offers tons of comfort for long gaming or typing sessions. As opposed to other keyboards, the Vulcan’s design made typing feel much more natural, more comfortable.

As ROCCAT is a German company, the keyboard bears a reliable, durable look and feel. The keyboard wields an anodized aluminum plate that not only fortifies that clean look I spoke of, but it also protects the keyboard from normal gaming wear and tear. Even the keys feel capable of taking the harder keystrokes we all employ in intense gaming situations. As part of my stress test, I applied quite a bit of pressure to the keys and they bounced up as if to say, “That all you got?”. What really made me fall in love with the ROCCAT Vulcan 122 AIMO was how it essentially became my control room. With its large size, volume control section on the top right corner, various buttons to summon different applications, and the ROCCAT Swarm app to quickly remap keys, I felt like I was in control of my very own Starship Enterprise (Nerd Alert).

In actuality, the ROCCAT Swarm app does much more than remap keys. It’s the special service that allows you to fully customize your Vulcan 122. Want the keyboard to sound like a typewriter or a blaster from Star Wars? You can make it so. Want to create profiles or remap keys for specific games? The Swarm app makes it easy to do that.

Although, my personal favorite customizable aspect was the illumination. As a default, the long-life LEDs under the keys utilize the AIMO Illumination technology. With it, the keys are able to produce a vast variety of colorful illumination. What makes it even cooler is how this illumination changes based on what you’re doing and how you’re using the keyboard. For instance, as I type this review, the Illumination is changing from light green to light blue and the keys I am pressing are transitioning from white to yellow to purple to light blue. It’s so cool. It’s also hard to stay focused and type because I keep marveling at the colors.

Furthermore, the AIMO illumination effect becomes a family affair, as it connects to other ROCCAT gear connected to the PC. Together, they form a beautiful bond of color that illuminates even the darkest of rooms. For my testing, I used both the Kain 120 & 200 AIMO mice and both connected effortlessly.

One thing to note is that on one occasion both the keyboard and the Kain 200 AIMO mouse were plugged in at the same time. For whatever reason, the keyboard’s lights turned off. When I unplugged it and plugged it back in, the keyboard lights turned back on but the mouse light turned off. It was almost like a strange tug-of-war. After resetting the mouse illumination settings in the ROCCAT Swarm app, both products synchronized again. It may have been just a fluke glitch, but one to keep an eye on, nonetheless.

Now, if the bright colorful illumination isn’t your speed. The Swarm app also lets owners switch to unique light styles like a colorful wave, a moving snake, a heartbeat, breathing simulation, fade, ripple effect, or just one stand-alone color. Whatever your style is, I’m happy to say that the Vulcan 122 has something for you. For me, it’s the ever-changing AIMO illumination that causes my wife to call the keyboard an “adult light bright”. The ROCCAT Vulcan 122 AIMO is available now for Windows 7, 8, and 10 on the ROCCAT website. Its specs say that it’s only compatibility is with the aforementioned Windows devices, but in my testing I did find that you could plug it into a Mac. It just required passing some pairing exercises. Nevertheless, it does work. However, I wasn’t able to download the ROCCAT Swarm app on the Apple device I was using. So, it wouldn’t be customizable on Mac.

The gaming keyboard runs for about $159.99. When you compare it to the price tags of other gaming keyboard brands, it’s actually a very competitive price. Obviously, depending on your rig and what you’re looking for will dictate whether or not the Vulcan 122 is worth its price tag.

However, for my money I’d say it is. My time with the ROCCAT Vulcan 122 AIMO gaming keyboard checked off every single box I had. It’s extremely responsive, comfortable, durable, reliable, and altogether exciting to use. Each and every session with the ROCCAT product had me giddy with excitement no matter how mundane my activity was. As I said before, it’s now a staple in my setup and I don’t know how I could play or use any other keyboard. It’s definitely worth every penny.

Read about the Kain 200 AIMO and Kain 120 AIMO here. All three products are available now on the ROCCAT official website.

Hands-On With the One By Wacom (Video Review)