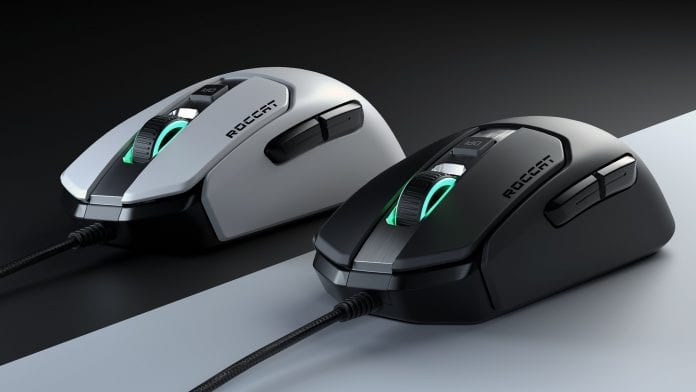 For the last few weeks, we’ve released a series of ROCCAT hands-on impressions each week. We began with the ROCCAT Vulcan 122 AIMO gaming keyboard and then moved on to ROCCAT’s wireless gaming mouse, the Kain 200 AIMO. Our last in this end-of-Spring series is with the Kain 200’s wired twin.

German ingenuity meets a sleek, yet durable, ergonomic design with ROCCAT’s wired gaming mouse, the Kain 120 AIMO. This is our hands-on experience with one of ROCCAT’s premiere wired gaming mice. One of the Most Precise, Dependable Gaming Mice on the Market

In gaming and in everyday use, a quality gaming mouse is an extension of the user’s hand. It acts as a liaison between a user’s desire and the computer’s functionality. In many ways, a proper gaming mouse is the one piece of tech that makes it all happen, excluding a computer’s graphics card, RAM, SSD, and so on. If you’re dealing with a poor quality mouse, the rest of the experience suffers.

Fortunately, I had the opportunity to review a gaming mouse that is easy on the wallet, while not skimping in quality. The ROCCAT Kain 120 AIMO wired gaming mouse is a product that I found won’t let you down in any situation. If you read my Kain 200 AIMO review, you’ll find a lot of similarities in the two products, which undoubtedly proves that you can’t go wrong with either product.

My review of the Kain 120 started outside of the virtual world by analyzing the Titan Click and Titan Wheel 2.0. The Titan Click has the same incredibly light, precise feel that I fell in love with on the Kain 200. Its unhinged buttons and low-tolerance spring cushion each click, providing repeated click an effortless experience. ROCCAT promotes that the Kain 120 has Omron switches that last for up to 50 million clicks. While I more than likely didn’t get anywhere close to a million clicks, I could feel how 50 million is attainable.

The Titan Wheel 2.0, which was my MVP of the Kain 200 is just as good on the Kain 120. The wheel features a rigid, rubber texture, with a soft resistance between each turn for precision scrolling. In my testing of the Kain 120, I used the SteelSeries Rival 310 and a unbranded run-of-the-mill mouse to compare and neither wheel felt nearly as good or comfortable as the Kain 120’s Titan Wheel 2.0.

When connected to the rig, the Kain 120 seamlessly integrates with any other ROCCAT product for a light show that’s extremely appealing to the eyes. Customizing these lights becomes a sinch once the ROCCAT Swarm app is downloaded on your PC. A customizable function that’s even more important in the app is that of the dpi (dots per inch).

Upon first connecting the Kain 120, the cursor can be difficult to budge, thanks in large part to the default low dpi setting. The dpi square below the Titan Wheel 2.0 allows you to free up the mobility of the mouse. However, the Swarm App allows you to increase the dpi to up to 16000dpi, which is just ridiculously hard to control. More power to you if that’s up your alley, but I found that the need for it is very few and very far between.

Nevertheless, the easily customized dpi, in combination with the smooth Owl-Eye optical sensor, creates effortless tracking. Mix that in with the Titan Click and the Titan Wheel 2.0 and I found myself having far more success with games like Apex Legends, Fortnite, and Team Fortress 2.

Precision shots had never been easier than it was with both the Kain 120 and 200, during my tests. With assault rifle-type weapons, I could swiftly switch to a higher dpi to quickly track down foes and vigorously attack them thanks to the Titan Click. Conversely, I could switch to a lower dpi for sniping scenarios for more precise head shots. I found that I rarely missed my targets and even won several Apex Legends sessions as either the kill leader or a contributing teammate. Fortnite was an entirely different story, but I don’t have enough time to explain to you how bad I am at that Battle Royale game.

My overall impressions of the ROCCAT Kain 120 AIMO’s performance was quite impressive. It exceeded my expectations and excelled in every situation I put it into. The customizable switches and easy switching from each unique feature makes it easily one of the most precise, dependable gaming mice on the market, today.

When reviewing twin mice, where the main difference between them is that one is wired and one is not, it can be very challenging to find things that set them apart. In the case of the Kain 200 and 120 this is pretty much the case. The design of each is almost identical, with the Kain 200 having breaks in the pads underneath to accommodate the charging cable, whereas the Kain 120 is one straight pad.

Both mice are extremely comfortable to use. They feature an ergonomic design that naturally forces your hand to cup the mouse. Your fingers assume a natural position along the left and right clicks, while your lower palm rests on the surface of whatever you have the mouse on. The lower palm serves as a cushion for your wrist, promoting longer gameplay without too much fatigue.

By comparison, the ergonomic design of the Kain 120 AIMO made using the unbranded run-of-the-mill office mouse and the SteelSeries Rival 310 an absolute pain to use. My fingers were bent uncomfortably and the low design offered litter comfort. It was always a blessing to return to the 120.

Despite its lightweight feel, the Kain 120 AIMO doesn’t feel cheap. Rather, it feels as if it could stand up to whatever intense gaming session you want to put it through. Furthermore, it includes a smooth performance coating that actually holds up to wear and tear. I should know because I dropped the mouse a few times by accident and found no marks, scratches, blemishes or performance issues of any kind. The Tangled Cords We Weave

As with any wired product, there are some advantages and disadvantages with them. An advantage is having a dependable product you never have to charge at your fingertips. That is definitely the case with the Kain 120 AIMO. However, the flip side is that you lose out on the freedom that only wireless products can offer.

The Kain 120 AIMO includes a 1.8m braided wire and I swear it is on a mission to get tangled. Outside of the few times I dropped the mouse on accident, I’ve actually babied it for the most part. After every session, I have carefully wrapped the wire to avoid any sort of tangles or weird tiny curls. Yet, despite my best efforts it continues to curl.

Of course a curling wire isn’t a make-or-break reason for purchasing a product. If it doesn’t bother you then the Kain 120 AIMO is a product that should be right up your alley. However, my OCD found the curly cues to be very bothersome. That said, it never actually took away from the experience as a whole. If you’re in the market for a high-quality gaming mouse that won’t break the bank, then I would suggest the ROCCAT Kain 120 AIMO. It’s a brilliantly designed mouse full of impressive tech that will suit whatever needs you have. The price for the Kain 120 AIMO is only $69.99, as of this writing. That’s in stark contrast to its wireless twin, the Kain 200 AIMO, that’s $99.99.

For my money, I’d be more inclined to shell out the additional $30 for the wireless Kain 200, but that’s more a testament to my wireless preference. Both products will serve you well and be dependable, precise liaisons to all of your gaming and everyday computing needs.

Huge thanks to ROCCAT and Turtle Beach for letting us take these amazing products for a spin. Read about the Vulcan 122 AIMO and Kain 200 AIMO here. All three products are available now on the ROCCAT official website.