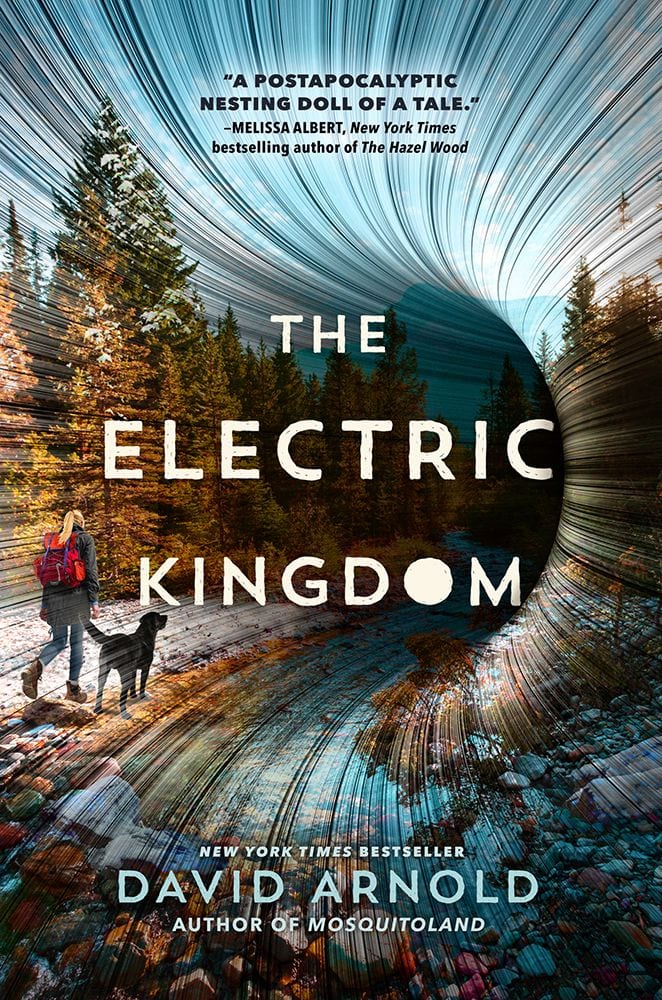 In absence of nothing, you begin to understand what’s important in life. Not video games, not Twitter, not even electricity are vital when it comes to human existence, which by design, is supposed to be a shared experience.

That’s a big part of what David Arnold (Mosquitoland) wants you to understand in his new soft sci-fi book, The Electric Kingdom, which takes a look at a post-apocalyptic-ish world, where on paper the villain is a deadly virus caused by humans and carried by Flu Flies, but in actuality, is indifference.

When a deadly Fly Flu sweeps the globe, it leaves a shell of the world that once was. Among the survivors are eighteen-year-old Nico and her dog, on a voyage devised by Nico’s father to find a mythical portal; a young artist named Kit, raised in an old, abandoned cinema; and the enigmatic Deliverer, who lives Life after Life in an attempt to put the world back together.

As swarms of infected Flies roam the earth, these few survivors navigate the woods of post-apocalyptic New England, meeting others along the way, each on their own quest to find life and love in a world gone dark.

The Electric Kingdom is a sweeping exploration of art, storytelling, eternal life, and above all, a testament to the notion that even in an exterminated world, one person might find beauty in another.

In attempting to understand the cause of the collapse, as some of our characters do, you soon realize it’s not nearly as important as that the collapse happened at all. And this is not to suggest some higher power decided Earth’s time was up, this isn’t that kind of story, no, it’s more about our hubris as a species, pushing the boundaries of Natural Law to its limits. It’s about our relationship with the planet and each other.

What David is truly looking to examine here is something only he knows, but from my point of view he’s looking to suggest that what good is finding the answers if you have no one to share them with? That life is a mutually beneficial experience and that includes happiness and love.

Like the summary states, the book is told from the point of view of a few different people whose lives are connected in ways they don’t yet understand. I will say, what’s in place of a prologue offers a tasty treat to chew on as you work your way through the book, and as things unfold, you’ll begin to understand why. Indeed, there’s gold at the end of that little rainbow.

So, as we follow Nico, Kit, the Deliverer, and those they pick up along the way through this lush, not so much a wasteland, the books journey aspect takes over and things only get weirder from there. You soon realize that other forces are at work here, and not of the spiritual nature. You’ll definitely get the sense that this is perhaps all a game, and while the pieces aren’t necessarily being controlled, there’s an influence present that is certainly keen on a particular outcome.

I’d like to take moment here to comment on the violence and overall creepiness that can sometimes accompany these stories of desperation. Some writers in my opinion, cross that line where rather than suggest or creatively depict horror, they state it or describe it outright. David shows great restraint and respect for the craft here, never crossing that line into exploitation territory but still getting the point across, just in a tactile way.

Anyways, one of the character’s favorite authors is Ted Chiang who wrote the short story Story of Your Life which was then turned into the film Arrival, something I was reminded of during this book’s final passages. And not the Sapir-Whorf theory, or linguistic relativity, that has more to do with how language can influence the way we perceive reality. No, I was more reminded of the aspect of non-linear storytelling, or how these characters start to see the world through the philosophical lens of determinism. Weighty shit to be sure, but once you  read the book, you’ll start to understand what I’m talking about and how David cleverly manipulated this idea.

Additionally, David offers up plenty of social commentary one of which is his suggestion that you can find immortality in the works of authors, painters, and creators, not in the Gods who wield lightning bolts, or the machines that may or may not preserve life. No, there are simpler ways for one to leave their mark, and these characters seem to understand that.

So, once the cat is fully out of the bag, although I expect many of you to figure some of it out beforehand, Arnold just lays all his cards on the table. This is where we go through several journal entries from previous Nico’s, warning her not to make some of the same mistakes they did. This even includes trying to prevent the virus from spreading at all, which in the end, might not be possible, or the point.

After realizing that, Nico begins to right some of the wrongs that she’s (we) encountered throughout this journey, and as such, developed the basic principle, the “Law of Peripheral Adjustments” which is the practice of helping people help themselves, while standing on the “foggy edges of fate” It’s a fictitious theory of course but suits Arnold’s intent perfectly. And it seems like an already existing plausible theory, so much that I looked it up because I had never heard of it before. Gotcha!

In the end, Arnold doesn’t offer up any answers as far as how to avoid this, or any catastrophe, rather treating the virus as the do-over the planet so desperately needed. And why should he, he’s an author, not a scientist. But that may not make for a satisfying read for those that require those types of third acts. And rather than speculate on his intention, I’ll pull a quote instead, one that sums it up nicely…

“The truth was, it didn’t really matter where it led or how it got here. Whether alien or machine or black hole on Earth, Nico felt planted in a new light of love…”

The Electric Kingdom is an emotionally resonant story full of moments of grace, honesty, and friendship. I think the book asks more questions than provides answers, but I also think it’s a roadmap, and like all good teachers, David has given us a compass and pointed us in the right direction, the rest my dear friends, is up to us.

To listen to my conversation with David Arnold, click HERE!

To order a copy of The Electric Kingdom, click HERE!