In this issue they take a look at the documentary genre, an often overlooked facet of comic book movies.  With the rise in popularity of comics, there have been an increasing number of comic book themed documentaries in recent years.

Your hosts discuss this phenomenon and take a closer look at four specific documentaries, The Death of Superman Lives:  WhatHappened, Crumb!, Finding Steve Ditko, and Comix:  Beyond the Comic Book Page.  Enjoy this audio documentary of documentary films on comic books.  How’s that for all-encompassing?

Stay tuned for HKC! #198 on Wednesday and #199 on Friday as I catch Cinelinx up to the JCU schedule! 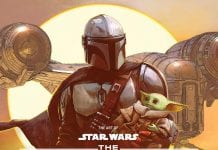 Geek Pick of the Week – The Art of Star Wars: The Mandalorian