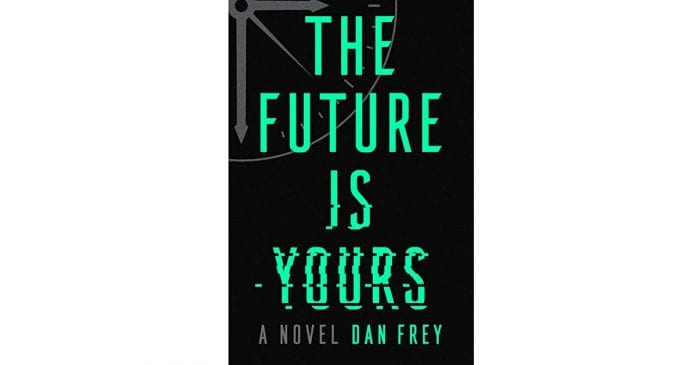 This week brings a new take on time-travel with The Future is Yours from Dan Frey. Combining humor, techno thriller, and timely personal drama, this one makes for a quick, enjoyable read. Here’s our full review!

Imagine there was a technology that allowed you to see into the future. Now imagine you’re a Silicon Valley tech bro looking to get rich off the technology and establish yourself as the next big CEO? Well, that’s technically the basis for The Future is Yours, though it’s not as annoying as my flimsy description makes it sound.

Set in modern day, The Future Is Yours puts the focus on two friends from college who’ve managed to achieve the impossible: time travel. Well, sort of. Instead, they’ve created a computer device that is able to connect to the internet one year into the future. As such, they’re able to read emails they’ll get down the road, check stocks, sports scores, and generally see what life is like a year into the future.

Adhi Chaudry, a genius introvert, is the brains behind the technology, while Ben Boyce is the dynamic and charismatic CEO looking to make it big. The pair forged an unlikely friendship during their college days and their bond has kept them together on this new venture.

As they dream of simultaneously changing the world and making a fortune, the future they’ve already seen looks incredibly bright. Yet, as they face down inquiries from the government and personal strife, more questions about the technology are raised. Is the future set in stone?

As they head towards launching the product on the world, the future they saw is something they thought was impossible…changing. Now the product they thought could bring them fame, while changing the world, could be leading them towards war and apocalypse. And that’s not to mention how their personal lives seem to be completely unraveling along with their company’s hopes. There’s quite a bit more going on, but in a story dealing with time travel stuff, it’s hard to know exactly what might be a spoiler. As such, I’m gonna keep the plot details about there. I know it’s not much to go on, but trust me when I say it doesn’t take very long for the book to hook you.

The book tells the story via “in-world” emails, blog posts, transcripts, and even text messages. As such, you’re putting together the story as something of an outsider. There’s a feeling of looking at these people living their lives, and while you know there’s nothing you can do about the outcome, the personal touches in seeing their emails and private texts almost instantly endears you to the characters.

The writing style Frey uses is deceptively simple and makes for a super easy read. Because you’re essentially reading conversations between people, there’s a natural flow without any stiff formality to the prose. Before I knew it, I was 50 pages in without noticing where the time had gone! After that point, I couldn’t put it down and found myself furiously flipping the pages until the end.

Don’t let this fool you, however, as the novel does an excellent job of incorporating plenty of the hard-science fiction elements. It doesn’t shy away from some heady concepts and technology, but manages to do it in a way that’s understandable without feeling like it’s being dumbed-down. In many ways, reading through The Future is Now felt a lot like reading some older Michael Crichton books.

Considering Crichton is still one of my all time favorite writers (whose books I frequently re-read), this is about the highest praise I can lay down for a book. Finding that right balance between the nitty-gritty of science, while maintaining engaging characters is a line many try to walk, but not everyone can achieve. Here, Dan Frey does it deftly and in a way that also incorporates modern speech patterns and surprisingly timely references.

In short, I had a whole lot of fun reading the book, and as it hurtled towards the conclusion, I found myself anxious for an outcome that would allow these characters some semblance of peace. To be honest, I’m still not entirely sure the novel manages to stick the landing and feel satisfactory. That said, it was so damn fun getting to that point I almost don’t care. The drama and personality behind the main characters are engaging enough to carry the story, even when specific plot points might feel underwhelming (which isn’t often).

The Future is Yours is a fast-paced, highly engaging story, with characters you can’t help but grow attached to. Despite having no “action” to speak of, it feels like the story hurtles you forward to the point of leaving you breathless and needing a break. It’s a quick read, funny, and perfect for those looking for a good techno/Sci-Fi story to keep you company while you’re stuck inside this Winter.

The Future is Yours launches today (February 9th).

A Dark And Hollow Star – Review