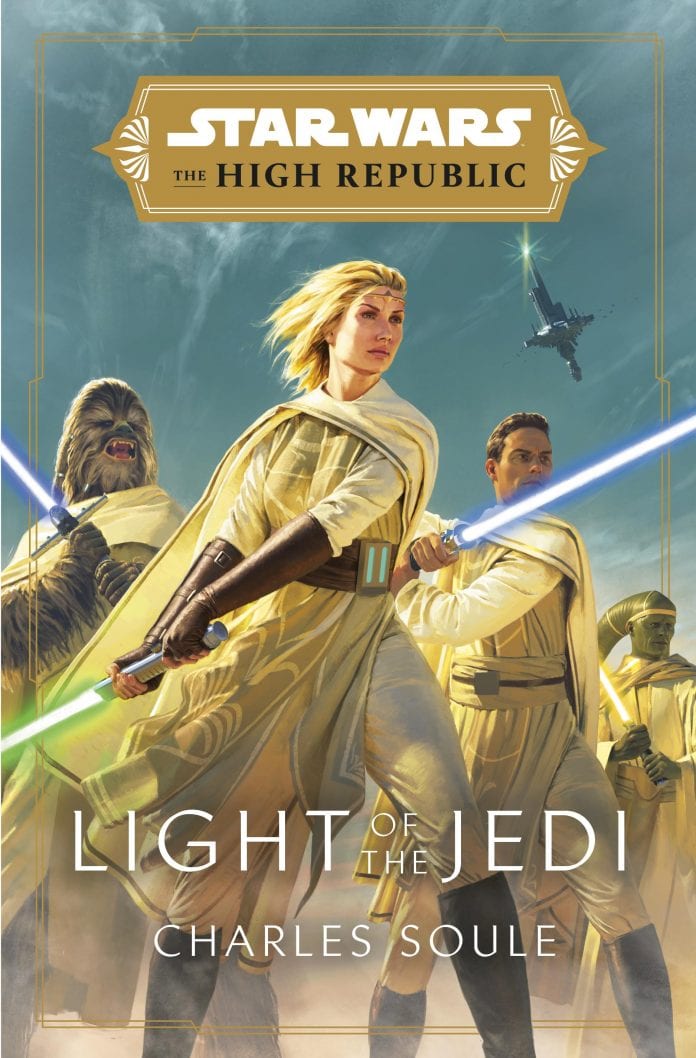 Star Wars soars into new territory today with the launch of The High Republic publishing initiative! First out of the gate is Light of the Jedi by Charles Soule, an exhilarating launch title that serves as both an introduction to this new era and a highly entertaining Star Wars novel.

“Long before the First Order, before the Empire, before even The Phantom Menace… Jedi lit the way for the galaxy in The High Republic…”

There’s a problem brewing in the galaxy, with a schism festering between the ruling class and the steerage. These elites, known as the Republic, attempt to harness apathy and push through policies that further enrich the already wealthy and restrict democratic liberties in the Outer Rim.

And if these hyperspace lane overlords are successful and can create this impression, it is less likely that Outer Rim governments will listen to the rising chorus of voices calling on them to do what is right. To hold those responsible accountable and actually combat spiraling class degeneration. Not that Star Wars has ever toyed with allegories.

This system of governance, a sort of philosophical technocracy, has its limits, and for some, those limits have been reached, and the match to this powder keg has been lit. Welcome to the new Star Wars, welcome to The High Republic.

And who better than to usher in this new era of Star Wars than Charles Soule, the mad genius who made Darth Vader relevant again. But fear not gatekeepers, there are enough familiar maxims that should please even the most hardened Star Wars fan, the most glaring example being the Jedi.

It is a golden age. Intrepid hyperspace scouts expand the reach of the Republic to the furthest stars, worlds flourish under the benevolent leadership of the Senate, and peace reigns, enforced by the wisdom and strength of the renowned order of Force users known as the Jedi. With the Jedi at the height of their power, the free citizens of the galaxy are confident in their ability to weather any storm. But even the brightest light can cast a shadow, and some storms defy any preparation.

When a shocking catastrophe in hyperspace tears a ship to pieces, the flurry of shrapnel emerging from the disaster threatens an entire system. No sooner does the call for help go out than the Jedi race to the scene. The scope of the emergence, however, is enough to push even Jedi to their limit. As the sky breaks open and destruction rains down upon the peaceful alliance they helped to build, the Jedi must trust in the Force to see them through a day in which a single mistake could cost billions of lives.

Even as the Jedi battle valiantly against calamity, something truly deadly grows beyond the boundary of the Republic. The hyperspace disaster is far more sinister than the Jedi could ever suspect. A threat hides in the darkness, far from the light of the age, and harbors a secret that could strike fear into even a Jedi’s heart.

Yes, if the Jedi weren’t seeking a better form of passive aggression over the ruling class to solve yet another galactic crisis, they themselves systematically created, then, it wouldn’t be the Jedi, would it? So, if laser swords, earth-toned flowing robes, and moody thinkers are your connection to Star Wars, you’re in luck, because Star Wars: Light of the Jedi has plenty of it.

In fact, Soule has crammed so much Jedi into one book you may have a hard time figuring out who the lead character is, but here’s a little secret, there isn’t one. Not in the traditional “farm boy” sense anyways, and that’s just one of the ways this new/old era looks to separate itself from the old/new. And here’s another spoiler, it works.

While this may be Soule’s first Star Wars book, it’s not his first fiction book. He’s written a couple of non-SW novels previously, good ones in fact, so I had zero reservations about his ability to tell a long-form story. What I didn’t realize is that he was hell bent on completely undoing a time period that until now had been unencumbered by war. Yes, as the summary states and has been well publicized, this thing kicks off with their version of a big bang. But rather than a run up or calm period of reflection to lure us into a false sense of security, Charles decides bombastic is a better approach and opens the floodgates.

Billed as the starting point, Light of the Jedi accomplishes many things in a world that will always be somewhat beholden to that familiar aesthetic. It introduces us to a host of new Star Wars “things” while managing to feel exciting and fresh at the same time. Yes, these aren’t the droids you’re looking for if your thing is Imperial blockades, pouty chosen ones, or zippity-zappity’s. Pappa’s got a brand-new bag and its pretty fucking cool.

As the antagonists, the Nihil are an interesting group of steam punk inspired zealots who, war boy comparisons notwithstanding, seem willing to jump into the fire for their boy king. It’s not entirely clear yet if their mandate is some form of hegemonized obstructionism, or if they’re simply just a bunch of pissed off radical nonpartisans. Sometimes they seem like a disorganized group of wannabe punk bands, other times, a shadowy menace that shouldn’t be underestimated.

In this case, the less I say about them the better, but understand that as with all those obsessed with power, strength at the management level is crucial. And what (who) emerges by the book’s end, even though still largely an unknown, is perhaps worse than even the Jedi could imagine. For now, they appear to be the perfect foil to these seraphic do-gooders, and more than up to the task of war.

One of my favorite things about Light of the Jedi, and The High Republic in general, is that it’s absolutely grounded in an ethos where inchoate Padawan’s learn the ropes and Master’s warm to the idea of profound fallibility. This is of course the basis for many Star Wars stories but in this case it’s of particular interest because the Jedi in many ways still have that new car smell. There’s not much rust on this freighter as of yet so we are witness to many of these Jedi making critical errors for the first time. Missteps that future Jedi will benefit from and also provide us, the reader, with some context the next time “learning from the mistakes of the past” comes around. This is true across the entire line up of phase one books, novels, and comic books coming your way.

You’ll meet many of these Jedi Masters, Knights, and Padawans in this book such as Sskeer, Elzar Mann, Burryaga Agaburry, Te’Ami, and Mikkel Sutmani, to name just a few. And many of them get a chance to flex their Force, some more than others, especially during Part One: The Great Disaster, where Jedi Master Avar Kriss puts on quite a show. You’ve seen her image front and center on many of the marketing materials, including the cover of this book, and if Charles was forced to pick a lead character, she would be it.

For my money however, the events on Elphrona are particularly strong, part of which includes an incredible chase sequence that rivals any other. It also introduces us formally to Jedi Knight Loden Greatstorm and his Padawan Bell Zettifar, who along with Jedi Indeera Stokes (and Ember), and Porter Engle, occupy the Jedi outpost on the planet. Each of them unique, this foursome provides the kind of Jedi kaleidoscope I was hoping for when this project was first announced, and I found myself particularly gratified during these parts. I also think it’s some of Soule’s best character and dialogue work.

Anyways, they are called upon to assist with what at first is a violent but seemingly innocuous Nihil raid on a nearby family, resulting in a kidnapping. But it quickly turns into something a little more than they bargained for and while I won’t say what happens, it should have your pulse racing. And an immediate conclusion that sets the table for what’s to come from one of the best Star Wars villains to come about in some time.

Listen, a non-spoiler review for Light of the Jedi is a bit like saying Lord of the Rings is about a group of friends who go hiking. It’s a dense, exposition filled, bit of story alchemy that also serves as a character infused introduction piece, so it’s tricky maneuvering through its spaces without revealing the good stuff, which there’s lots of.

Light of the Jedi is divided up into three parts, the aforementioned The Great Disaster, which is followed by The Paths, and finally The Storm. The book has that in media res opener we all know about where things fall apart quickly and a very Empire Strikes Back second and third act. As the first book of many to come, the result is exactly as you would expect, with things ending up significantly more complicated than before and the Jedi mostly licking their wounds on the Starlight Beacon.

Aside from a few cutaways to check in on the Nihil, things mostly stay in a straight line making it easy to follow along despite the chaos…and there is a fair bit of chaos. But don’t worry, the left side of Soule’s brain kicks in and makes sense of it all with impressive ease, all while maintaining the book’s high entertainment value. One thing that you should know about Charles is that he’s both a lawyer and a musician, which means both sides of his brain get a fair bit of use. And in Light of the Jedi you could easily see that this could’ve been a clusterfuck of ideas that went off the rails, but Soule’s logical and innovative sides came together to keep things both cohesive and fun.

Charles throws nearly everything at the wall, and what’s most impressive, for me anyways, is that it all sticks. This is a winner for this publishing initiative and will serve not only as a great story for the mass market Star Wars crowd, but as a handy reference book for the many High Republic stories that have yet to come. This isn’t the genesis of The High Republic era, but it is the beginning of the end.

The folks over at Lucasfilm want you to read this book first, there’s a reason why.

Star Wars: The High Republic: Light of the Jedi is available now, you can order a copy HERE!