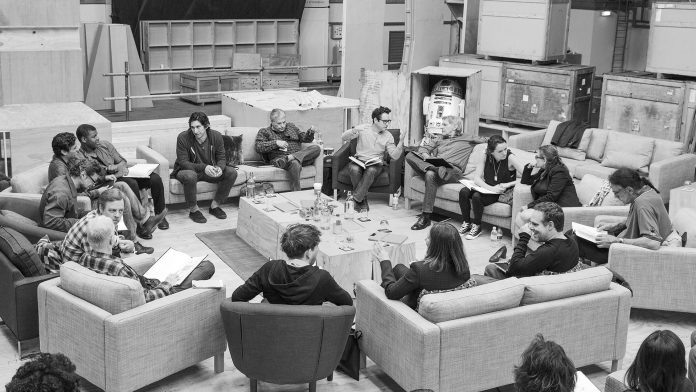 We heard word last night that today would bring the first table read (the first cast read through of a script) of Star Wars: Episode VII, meaning that all of the primary cast would be gathered together. Understandably this would be a hard thing to keep underwraps, so many of us were hoping the names would be officially revealed…and we weren’t disappointed.

Just moments ago, the official Star Wars website revealed the picture of the read through (above) featuring the cast members, while also dishing out the list of confirmed cast members:

Director J.J. Abrams says, “We are so excited to finally share the cast of Star Wars: Episode VII. It is both thrilling and surreal to watch the beloved original cast and these brilliant new performers come together to bring this world to life, once again. We start shooting in a couple of weeks, and everyone is doing their best to make the fans proud.”

So there you have it! As expected, the original cast members who played Luke, Han, Leia, Chewbacca, and C-3PO are returning. We also have confirmations on the Adam Drive and Boyega rumors. While we don’t have word on who everyone is playing, nor how big their parts are, it’s exciting nonetheless to have an official list and no more rumors. I’m stoked to see Andy Serkis joining the cast and can’t wait to see what role he’ll be playing.

What do you guys think of the cast list? Star Wars: Episode VII is set to begin filming soon for a December 18, 2015 release date. Official Star Wars day is this Sunday, and more news is expected to drop, so stay tuned!