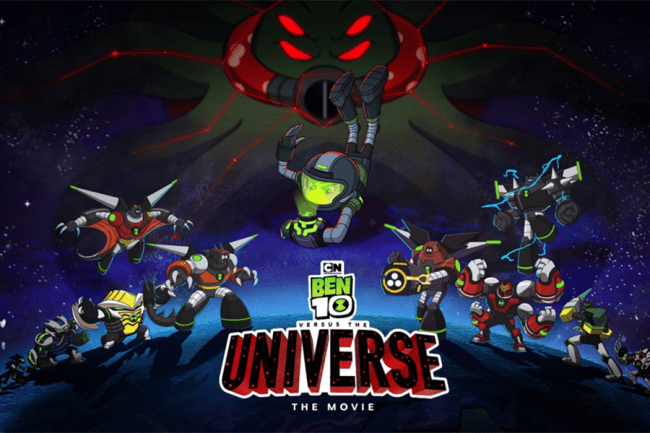 Earlier this fall, Ben 10 vs. The Universe: The Movie arrived on DVD and I took the chance to check the film out and see if it is worth watching, and if it measures up to past iterations of the Ben 10 story.

Ben 10 vs. The Universe: The Movie is set within the world of the most recent Ben 10 reboot series. The film isn’t particularly long, only clocking in at 69 minutes, and while I’m not familiar with this reboot, I know enough about the original Ben 10 that I was somewhat excited to check this film out. Once circumstances finally permitted me to check the film out, I have to admit, I was terribly disappointed to discover Ben 10 vs. The Universe: The Movie was not worth the wait.

To be quite blunt about it, this is a terrible movie.

It’s not all bad news: the animation throughout the film is decent enough. I’m particularly drawn to the designs for Vilgax. And the climactic battle is somewhat enjoyable to watch. But what derails the film for me is the absolutely cringeworthy dialogue that permeates the film. One such example? During the climactic battle, you’re treated to the villain complaining “You can’t defeat me! You’re just a ten year old!” And another line, delivered in completely deadpan fashion by one of the protagonists “I need to go save my watch!” Just because something is for kids doesn’t mean the dialogue has to be completely inane and dumbed down (look at Steven Universe if you don’t believe me, particularly the later episodes). The way the dialogue is written here just makes everyone sound really stupid and it completely ruins the story.

I get that Ben is only ten years old and has a lot of growing up to do, but the way he’s written he comes across as one of the stupidest ten year olds ever born. Even his big “ah ha” moment with the Omnitrix doesn’t come across as big as I think it’s meant to be. This is the shallowest iteration of Ben that I’ve ever seen, which is a huge disappointment, as I remember the original Ben 10 being a lot more engaging.

The special features (or lack thereof) are another sticking point for me. There’s really only one special feature available, and that’s some special animatics that show the film in progress (animatics are like storyboards in motion). There’s literally nothing else, no commentaries, no behind the scenes featurettes, I feel like there could’ve been more put into the special features.

I’ve been disappointed more than once this year, but Ben 10 vs. The Universe: The Movie might just be the biggest disappointment of them all.