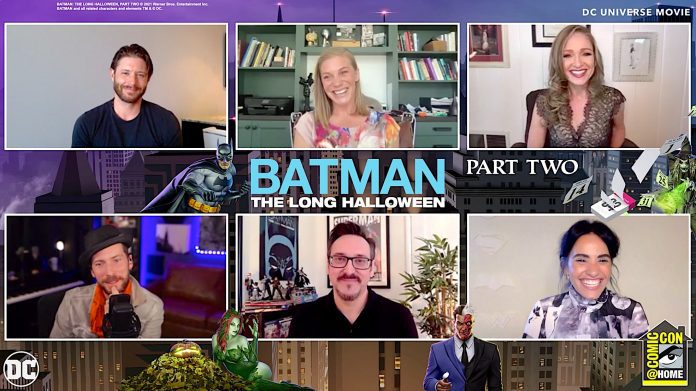 The SDCC at Home panel for Batman: The Long Halloween Part 2 brings a fresh look at the animated finale, and how things change from the comic.

Batman: The Long Halloween panel at SDCC @ home is today and I must say it was a pretty cool panel. Actress/host Tiffany Smith (He-Man and the Masters of the Universe, DC Daily) moderates the festivities, and joining her on the panel was Jensen Ackles (Supernatural, Batman: Under the Red Hood) as Batman/Bruce Wayne, Katee Sackhoff (The Mandalorian, Battlestar Galactica, Batman: Year One) as Poison Ivy, Julie Nathanson (Call of Duty: Black Ops Cold War, Suicide Squad: Hell To Pay) as Gilda Dent, Troy Baker (The Last of Us, Batman: Arkham Knight) as The Joker and screenwriter Tim Sheridan (Reign of the Supermen, Superman: Man of Tomorrow).

Inspired by the iconic mid-1990s DC story from Jeph Loeb and Tim Sale, Batman: The Long

Halloween, Part Two completes the two-film journey as the Holiday Killer is still at large and, with Bruce Wayne under the spell of the venomous Poison Ivy, Batman is nowhere to be found. Liberated by an unlikely ally, Bruce quickly uncovers the real culprit: Poison Ivy’s employer Carmine Falcone. The Roman, his ranks decimated by Holiday and his business spinning out of control, has been forced to bring on less desirable partners – Gotham City’s rogues’ gallery.

In the meantime, Harvey Dent is confronting battles on two fronts: attempting to end the mob war while also dealing with a strained marriage. And, after an attack that leaves Harvey hideously disfigured, the District Attorney unleashes the duality of his psyche that he’s strived his entire life to suppress. Now, as Two-Face, Dent decides to take the law into his own hands and deliver judgement to those who’ve wronged him, his family, and all of Gotham. Ultimately, the Dark Knight must put together the tragic pieces that converged to create Two-Face, the Holiday Killer, Batman, and Gotham City itself.

Below you can check out 2 clips from the movie. The first is “Sofia” and the second is titled “Fireworks”:

A new Falcone arrives in Gotham City as Sofia Falcone, daughter of mob boss Carmine “The Roman” Falcone, comes to her father’s aide – only to discover Carmine is recruiting a new breed of criminal to help with his plan. Laila Berzins (Genshin Impact) and Titus Welliver (Bosch) voice Sofia and Carmine, respectively.

It’s the Fourth of July, but the fireworks are not limited to the sky as a mob war continues, Gotham City’s rogues’ gallery flourishes, and our protagonists – Batman (voiced by Jensen Ackles), Police Commissioner James Gordon (Billy Burke), and Harvey & Gilda Dent (Josh Duhamel, Julie Nathanson) contend with devious forces on all sides. Among those forces is Carmine Falcone (Titus Welliver), who takes a moment for an ominous visit with Gordon and the Dents in this all-new clip. 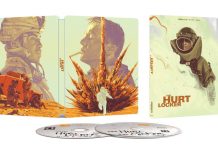