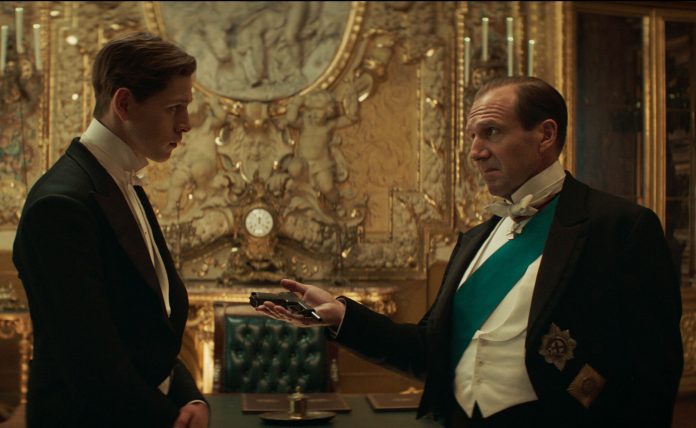 Disney has revealed the physical media release details, and bonus features, for The King’s Man arriving next month!

While we know The King’s Man is heading to streaming (via Hulu) early next month, today brings details on the physical release for movie-lovers to pick up. The film will be availble for digital purchase on February 18th, with the 4K Ultra HD/blu-ray arriving on February 22, 2022.

Set during WWI, The King’s Man tells the exhilarating origin story of Kingsman, the world’s very first independent intelligence agency. As a collection of history’s worst tyrants and criminal masterminds gather to plot a war to wipe out millions across the globe, one man must race against time to stop them.

A Generation Lost – Discover how the filmmakers created a richly textured story that explores the origins of the Kingsman spy organization.
Oxfords and Rogues – Meet the phenomenal new cast of characters Matthew Vaughn has assembled.
All the World’s a Stage – Delve into the meticulous world-building of THE KING’S MAN with interviews, on-location footage, artwork, and details of on-set construction and design.
Instruments of War – Experience the analog spy tech and early 20th century weaponry utilized in THE KING’S MAN and see a breakdown of the precise execution and evolution of the major stunts and combat in the film.
Fortune Favors the Bold – Join Matthew Vaughn and his team for music scoring and sound design.
Long Live the Kingsman – Cast and crew reveal their thoughts about their collective journey through the very special experience of making THE KING’S MAN.
Featurettes
No Man’s Land – Experience the creative process behind the harrowing knife battle sequence in several stages: rehearsals, storyboards, interviews and on-set footage, culminating with the atmospheric VFX.
Remembrance and Finding Purpose – Learn about amazing organizations such as The Royal British Legion and Help for Heroes, two U.K.-based resources for recovery, well-being and employment for military veterans. Also hear why Matthew Vaughn strongly supports their mission.

On top of the individual release, February 22nd will also bring a 3-movie boxset bringing together all the Kingsman movies (and previously released bonus features) into a single set.

Will you be picking up The King’s Man next month?