With the green light given, and a release date set, things are in motion for Denis Villeneuve to begin filming the next Dune film this Summer.

I know, it’s a bit silly to report on when a movie will begin filming at some point in the future. Even so, it’s Dune and I cannot contain my excitement of seeing the next chapter happen. As such, you get to deal with the goofy, excited news posts!

Over the weekend, reporter Josh Encinias was present at a local screening for Dune: Part One, where a Q&A was held with members of the filmmaking team who brought the film to life. During that, one of the film’s Producers revealed that filming on Part 2 would going down this July:

The producer of #Dune Part 2 just revealed they will begin filming on July 18, 2022. pic.twitter.com/Ul21wYIvJs

Seems like an oddly specific date if they weren’t already set and ready to go by that point, so I’m pretty excited! Hopefully we’ll get some more casting news in the near future for the important characters who’ve yet to make their appearance. 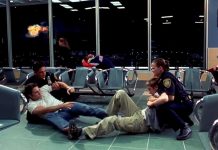