The news came after Lady Gaga teased the appearance on her Twitter account on Thursday, August 4. The musical sequel named Joker: Folie à Deux will hit theaters on October 4, 2024.

The sequel to the Oscar-winning and $1 billion grossing film starring Joaquin Phoenix. Hollywood Reporter dropped news of the rumor last month, and reported today Lady Gaga will be starring opposite of Phoenix. While her role hasn’t been confirmed, it’s not a stretch to assume Gaga will take on the role of Harley Quinn in the musical sequel.

Director Todd Phillips, who also produced the Gaga-starred A Star is Born, has reportedly been writing the script alongside Joker co-writer Scott Silver. Bradley Cooper, Gaga’s co-star in A Star is Born, was a producer on the first Joker film.

Joel, Elle, and More Come to Life in New Last of Us HBO Posters 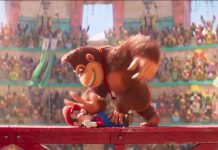