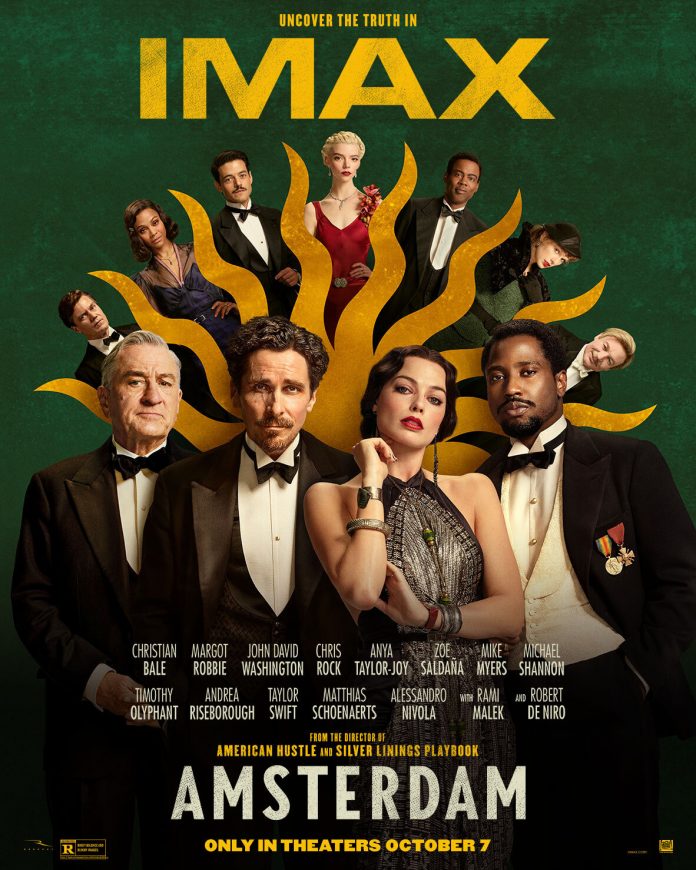 David O. Russell’s latest film is a satirical political thriller cast as a fast-talking noir. Unfortunately it doesn’t quite have the direction, and coherency to meet the lofty expectations its star-studded cast and impeccable production suggests.

In Hollywood, the answer is often more is better. More action, more special effects, more music, more cameos, more production. Amsterdam is a film cast in this creed. It blends ideas both new and old. Mixes real life with satirical farce. Tries political conspiracy as well as whimsical comradery. The production is top notch, the music comforting. Every face in the film is a major star.

And yet….more is NOT better. For every classically endearing cinematic quality expressed by Amsterdam, it tries to blend it with something else. It feels as if the creative minds weren’t content for the film to fill a familiar place, and so they had to push it beyond. They were afraid of not standing out, or making a big enough impact. But it goes too far, the film loses grasp of what it set out to be. It becomes a labor of cinema rather than a labor of love.

That contrast comes apparent as the screen time goes on. The film feels like it throws everything against the wall in hope that something will stick. The burden to sift through it all and find something to hold on to falls upon the unsuspecting audience. Not that the film is difficult to make sense of, but it is hard to find its core principles; the emotion that drives it forward. What’s left feels like a Hollywood spectacle just going through the motions.

The film follows three main characters. First is Burt Berendsen (Christian Bale) a veteran injured in WWI and a doctor who works to help fellow veterans. Harold Woodsman (John David Washington) is also a wounded veteran, who fought alongside Berendsen, and is now a lawyer. Valerie is a nurse who cared for both men, and began to form a bond with them, falling in love with Woodsman. The three lived together in Amsterdam before Berendsen decided to leave for home in order to return to his life and help other veterans.

The film picks up more than a decade later. Woodsman and Berendsen are hired to investigate the suspicious death of their commanding officer from the war. During this investigation they become framed for murder, and find themselves on the run from both the Police and a suspicious secret organization. Following clues, they become reunited with Valerie, who helps them uncover a covert plot to overthrow the US Government.

The film’s narration does a bit of a jump step, starting in the middle before giving us a flashback and then returning to its original plot. What stands out the most is the fact that the film is chock-full of characters, and interestingly all of them are recurring. This provides them with importance beyond just a fleeting scene, but comes at the expense of proper screen time to develop and explore their situations more thoroughly. As a result, many of them feel very one-dimensional. In turn, a film brimming with one-dimensional character itself feels like it lacks depth, even if there is a lot of complexity to take in.

For example, the main character Burt Berendsen is a half-Jewish doctor who is hobbled by his injuries from the war. His handicaps provide him with solid motivation to help out others who struggled like he has. In addition, he is married to a woman from a wealthy high-society family, but he doesn’t belong. His father-in-law helped him through college and get his medical license, but no longer supports him because of his intent to help veterans and his association with people of color. His wife looks down on him similarly, and only seems to care about him when it is in her interest to do so.

Berendsen’s situation is very complicated, but he is only one of three main characters with complicated backgrounds themselves, and the film has many many more supporting characters who require screen time as well. It feels like the writers wanted to create a character that touched on as many poignant topics as possible, to “check all the boxes”. If the film focused on just one of those characterization elements, it may have settled down enough to find reasonable depth. But as is the film feins layers which are mostly empty nods to underdeveloped ideas.

Director David O. Russell is best known for his dramatic flair. Movies like Silver Linings Playbook and The Fighter worked because the main character(s) were flawed in some way and the film saw them persevere, no matter what it took. The film wants to fit Berendsen into this role, but with so much activity going on around him it loses focus. Amsterdam is perplexingly void of Russell’s fingerprints as a director besides the eccentric tendencies. While the main character in Amsterdam does follow in the mold of classic Russell tragic characters, facing unique obstacles in his personal life, the film isn’t catered to that type of an exploration.

Instead, the film attempts witty exchanges not unlike a Steven Soderberg heist film. It attempts wholesome whimsy like a Coen brother’s film, and to warp reality like Adam McKay is known for. It cartwheels forward with fluctuating narration, and an ever-changing carousel of characters like a Wes Anderson flick. In other words, Amsterdam feels influenced by major filmmakers, but doesn’t ever feel like it is pushing boundaries itself. It’s a strange case of an ambitious film feeling like it lacks ambition.

This is the type of film that exists from either giving full control to a filmmaker who can’t commit to editing his ideas, or IS the result of too much editing from studio intervention – I can’t really decide. Either way the editing, and greater narration is a problem. I can understand the intent to create something more free-flowing that feels unburdened from traditional plot mechanics, but the film’s tone isn’t light enough to pull that off. The script is in a strange place between comedy and serious drama. The comedy isn’t consistent enough to make up for the lack of depth, and the moments when it tries to be serious are somewhat sabotaged by the film’s attempts at comedy.

It doesn’t help that the narrative itself becomes more and more heavy-handed as it goes along. Despite being set in the 1930’s, the film does serve as a cautionary tale in relation to current events. Modern audiences appreciate when their films offer something more meaningful than basic entertainment, and Amsterdam is clearly trying to be more than just an excuse for a bunch of big-name actors to appear on screen together. But it didn’t need to be so obvious in its attempts to do something meaningful. As described above, the film’s scattershot attempt to address as many issues as possible feels undisciplined. Worst of all is the way the film’s dialogue repeats its messages as if the audience couldn’t pick them out of the chaos themselves.

Regardless of the film’s hyper-active approach, it does have its moments. Specifically when the film does finally slow down and catch its breath, it actually feels sweet and heartfelt. Likewise it has plenty of genuinely funny sequences, and the production design works as an homage to classic Hollywood without feeling repetitive. Specifically the cinematography provides a warmth and clarity which the script struggles to replicate. Similarly, the film’s huge cast of well-known actors is a draw, even if the film’s script doesn’t provide them with the opportunity to show off their A-game.