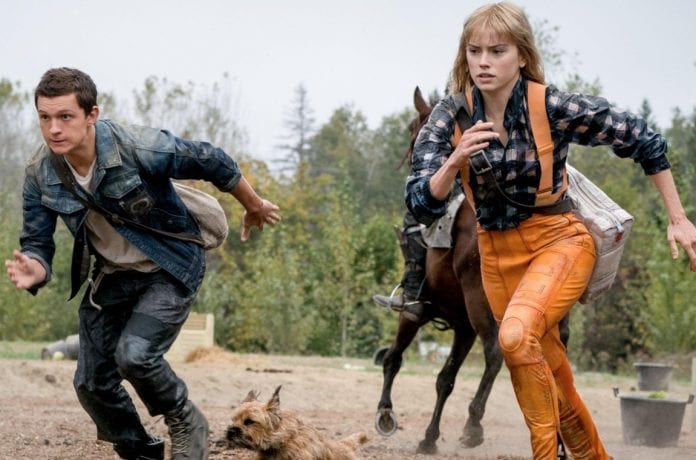 Daisy Ridley and Tom Holland bring natural charm to Chaos Walking‘s plot, but can’t quite make the Sci-Fi film as epic as it wants to be. Here are my thoughts.

Chaos Walking has had an interesting path to release. Originally filmed in 2017, the flick was then scheduled to undergo reshoots following poor test screenings. Daisy Ridley’s schedule for Star Wars, however, meant those couldn’t happen until 2019 and they were lengthy enough to significantly alter the story and add a big chunk to the budget.

Now, following delay after delay, it’s finally arriving and turns out to be much better than it’s troubled production would have you believe. Let me preface this real quick. I can’t claim this is a “good” movie. That said, Chaos Walking was very much “my shit” so I enjoyed it quite a bit while watching.

In fact, I never once felt bored, and the concepts introduced have kept me thinking on it long after the credits rolled. It sits at a strange place, in that I had fun with what was presented, but it absolutely falls short of the greatness it wants to be.

As is normally the case, I’ll be doing my best to veer away from major story spoilers. There are a few things I need to address, however, that requires some minor ones. So if you want to go into this film completely with a blank slate, you might want to come back later… Chaos Walking, based on the first novel of a trilogy by Patrick Ness, puts audiences on a brand new planet with the settlers of the first wave of a colony ship. The planet is not unlike Earth, sporting drinkable water and vibrant planet life, but one major thing sets it apart…The Noise.

This unexplained phenomena makes all of the men’s thoughts available for everyone to see/hear. Whatever they’re thinking forms around them, even in their dreams! The story picks up on Todd Hewitt (Tom Holland) who is, as far as he knows, the last person born on the planet. You see, there are no women here and we’re told the planet’s native species (the Spackle) killed them all soon after arrival.

Like any youngster, Todd is looking for ways to fit in, while bucking under the authority of those raising him. He’s restless on a planet where nothing seems to change and his only destination in life is doing chores on his farm. That is until someone new literally drops out of the sky. Viola (Daisy Ridley) crash lands on the planet, being the only survivor from a scout ship sent by the long-await Second Wave of settlers. Todd finds her initially and soon the whole town is talking—well, thinking—about what her arrival portends. Mayor Prentiss (Mads Mikkelsen) offers some much needed exposition upon meeting Viola, but it becomes clear not everything he says can be trusted.

After finding a way to escape the scrutiny of the town, Viola finds herself back on Todd’s farm. Knowing something is wrong and feeling a compulsion to help her, Todd leaves behind everything he knows to escort Viola across the new world in search of a way to get a message back to her ship. The journey forces Todd to confront the ideas he grew up with and learn the disturbing truth about the world he knows.

It’s a really cool idea and makes for some great Sci-Fi adventure that manages to feel grounded, while getting to bring in some neat stuff. On the whole, the idea itself manages to do most of the heavy lifting for the film (with less exposition needed than I expected), and it is genuinely fun to see how the filmmakers play with the idea of people able to see/hear everyone’s thoughts. The way it’s used is a major source of humor in the film (which I wasn’t expecting), but is also used to move the action and story forward in unique ways. One of the things my girlfriend and I found ourselves doing after watching the film was talk about the ways “the Noise” would be funny (or horrible) in our world. The film throws some interesting examples out there in a way that gets your mind turning almost without realizing it. There’s some clever, subtle, world-building that happens in Chaos Walking and it’s definitely one of the film’s strongest elements.

Another high point for the movie are the performances. Ridley and Holland play off of each other well, bringing a natural element to both of their characters that keeps pulling you along even when the plot does weird stuff. Mads Mikkelsen is an impressive villain and gives the story a real sense of menace and tension in subtle ways. Hell, even when he’s simply talking, you get the feeling something is wrong and our protagonists are in trouble. Chaos Walking‘s biggest problem, however, is none of these great aspects pull together in a significant way. Don’t get me wrong, I had a great time while watching the film but once the credits started rolling it was just kind of….eh. My girlfriend even turned to me and outright asked, “that’s it?”

The film has a number of intriguing concepts it throws at you, but none of them feel fully explored. Hell, one notable plot thread involving the alien, Spackle, is dropped completely. There’s a super cool moment in the film were we get to see these aliens in action and there are teases of a bigger story with them and how they react to Viola…Then nothing. It literally shows up in that one scene and I don’t even think they’re MENTIONED after that point.

Similar choices make the pacing feel wonky while cutting short some much needed explanation of other elements (somehow Viola crash landed silently and no one heard/saw it????). There’s also the matter of a sinister Preacher and some other things related to the backstory that are cool, but lack any greater context to make their moments feel meaningful. The result is every moment that should be a pay-off for audiences, in terms of subplots or character motivations, falls limp. Thus, we get to the end of the film and feel like there was so much more to be resolved.

It’s a film that wants to be epic Sci-Fi, and brings in some great ideas to make it feel that way, but it just can’t quite get where it needs to be. My overwhelming thought is that this would have been an excellent limited (e.g. 10 episodes) series. It needed more screen time to develop some of the peripheral characters, explore the grander concepts it introduces, and overall deliver the story it wants to.

As it stands, it’s hard to say Chaos Walking is good. I definitely loved elements of it, and had a blast watching, but at the end of the day there just feels like too much untapped potential. I would highly recommend it as a rental (the performances alone are worth that), but I wouldn’t suggest running to a theater right now for it.