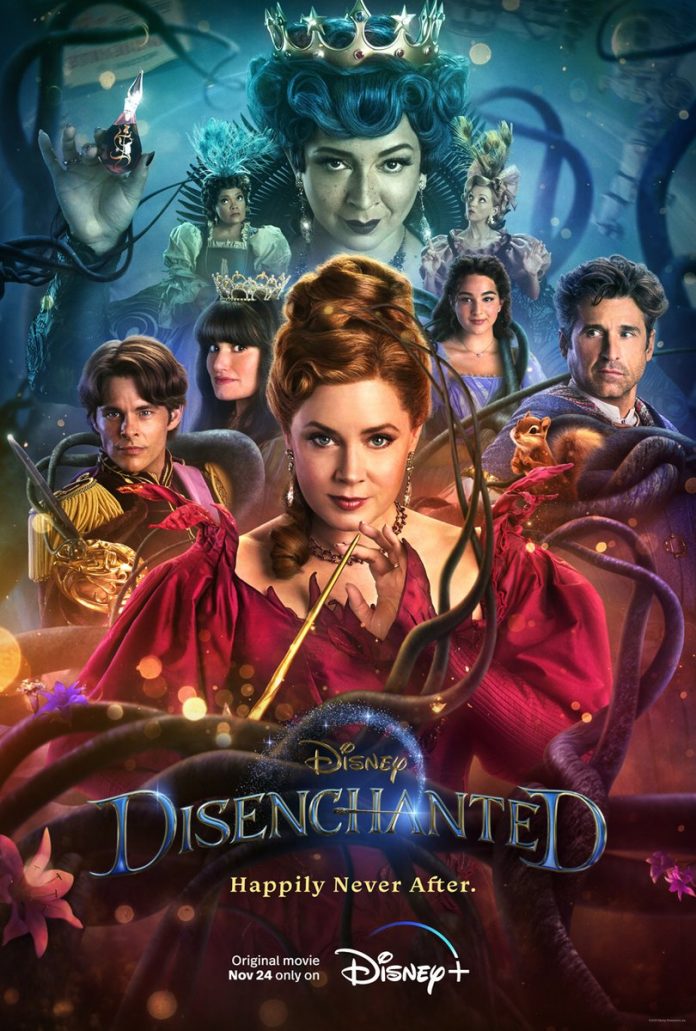 Disenchanted dishes up everything Disney fans could want from a successful sequel.

The all-new live-action musical comedy is a sequel to Disney’s box office hit Enchanted featuring the original cast from the heart-warming story of the lovable maiden from the fairy tale world of Andalasia who finally found her Prince Charming in the “kingdom” of New York City.

It has been 15 years since Giselle (Amy Adams) and Robert (Patrick Dempsey) wed, but Giselle has grown disillusioned with life in the city, so they move their growing family to the sleepy suburban community of Monroeville in search of a more fairy tale life. Unfortunately, it isn’t the quick fix she had hoped for. Suburbia has a whole new set of rules and a local queen bee, Malvina Monroe (Maya Rudolph), who makes Giselle feel more out of place than ever.

Frustrated that her happily ever after hasn’t been so easy to find, she turns to the magic of Andalasia for help, accidentally transforming the entire town into a real-life fairy tale and placing her family’s future happiness in jeopardy. Now, Giselle is in a race against time to reverse the spell and determine what ‘happily ever after’ truly means to her and her family.

The film’s crowning glory is undeniably the music. Oh my gosh, the songs! The soundtrack to gives Enchanted a run for its money, not least of all because we finally get a power tune from Nancy (Andalasian and overall Disney queen, Idina Menzel), and there is an absolute banger of a villain song in the mix. The music alone gets this film 5/5 gold stars. Hats off (as usual) to Alan Menken and Stephen Schwartz.

Another victory for this film is – and one that follows through from the first film – is Amy Adams’ portrayal of Giselle. While some may think that almost two-dimensional characters like the classic, stereotypical princess would be easy to play, it is harder than you think because the audience needs to believe in the character, not believe that you are pretending to be the character.

Adams does this with such grace. She is Giselle. Right down to the tips of her perfectly poised princess hands. This is made even more apparent when contrasted against Morgan. I felt that the young actress who played Morgan in this film was probably the weakest link, though standing next to Adams and company would be no easy feat. They shine SO brightly.

Speaking of stars, Patrick Dempsey and James Marsden should win all the awards for this film. My only disappointment aside from Morgan was that I didn’t get to see more of Robert and Edward. While Robert embarks on a new dragon-slaying adventure all his own (which, in all honesty, is terribly corny but earns a good giggle), Edward successfully swoops back onto the screen with all the princely charm and hilarious obliviousness viewers could ever hope for. Dempsey and Marsden are assets to this film and I could not be happier that they returned for the sequel. (Robert and Edward spinoff, anyone?)

Despite the smiling and dancing, the themes of Disenchanted hit hard. Viewers see an older Giselle and Robert embark on a different chapter of life together, and Giselle struggles with getting the stepmother-stepdaughter relationship balance right. We all want the fairytale yet we all combat the sometimes-challenging reality. Disenchanted is the perfect mix of the two, and the ultimate “be careful what you wish for” lesson.

It was also empowering to see an older princess portrayed so beautifully on screen (I know, I’m back to swooning over Adams again already). Just as driven, feisty, loving, curious and passionate as the Giselle we met 15 years ago, this Giselle is older and learning to be wiser. The key is learning, which I think we continue to do at every age, and the fact that Giselle’s life timeline marries up with my own, I found myself very grateful to have a happily married, midlife Disney maiden to marvel at. Thank you, Disenchanted and Amy Adams.

It would be remiss of me not to mention the awesome introduction to the Enchanted universe that is Maya Rudolph. I had high hopes and Rudolph delivered. Rudolph is well loved in the comedy crowd and transitions to Disney villain superbly. While Malvina Monroe and her two henchwomen ooze Cinderella-evil-stepmother-and-stepsisters vibes, there is a lot more to love despite what appears at first glance to be a generic villain. The comedy alone is family friendly and genuinely very funny.

The references and Easter eggs to a whole host of Disney films are well executed and add extra fun for fans. I think you would spot a new classic fairytale reference every time you watch Disenchanted. On my first viewing, I spotted references to: Snow White, Cinderella, Sleeping Beauty, The Little Mermaid, Beauty and the Beast, Aladdin, Alice in Wonderland, Tangled, and even Jack and the Beanstalk. I am sure I missed plenty, but I suppose that just demands another viewing!

Finally, Disenchanted would be no worthy Enchanted sequel without Andalasia. Thankfully, viewers return to Andalasia in a thoughtful and exciting way that adds to the magic of what Disenchanted has to offer. I thoroughly enjoyed this film, had a good laugh, and, as I suggested earlier, I am more than ready for a Robert-Edward spinoff. Giselle and Nancy can come too.

Disenchanted is now available to stream on Disney+.