After a few delays and plenty of hype, Denis Villenueve’s Dune has finally arrived. Visually stunning and magnificently told, it feels like you’re watching something special.

In many ways, it feels like I’ve been waiting decades for this Dune movie to arrive. Having read the original books when I was younger (before even the new novels started releasing) I grew up with David Lynch’s adaptation…and that was pretty much it. While I thoroughly loved the Sci-Fi channel mini-series, it’s lacking that big-budget oomph that could appeal to newer fans as well.

I can’t sit here and tell you I tried to keep my expectations in check for this film. Hell, it seemed like every new still or clip increased my excitement exponentially. Generally speaking, this isn’t the best way to go into a film. And yet, Dune: Part One (as the title card refers to it), managed to exceed those lofty expectations in almost every way. That’s not to say it’s perfect, but it felt like a genuine experience to behold.

Dune is, obviously, an adaptation of Frank Herbert’s classic science fiction story of the same name. The story puts the focus on young Paul Atreides (Timothée Chalamet), as everything he’s ever known in life is completely upended. The Emperor has taken control of Arrakis from House Harkonen and given it over to House Atreides instead.

The planet, also known as Dune, is the singular source of the Spice Melange: the most important substance in the universe. On top of being highly addictive, having health benefits, and adding to one’s lifespan, it’s also the only way interstellar travel is possible. As such, it’s ridiculously valuable. Whoever controls the planet and spice production are poised to be incredibly wealthy and influential.

It’s an opportunity not to be missed, despite the dangers. As such, Paul, along with his mother and father (Jessica and Duke Leto), leave their ocean-world of Caladan behind for the arid, desert wasteland of Arrakis. Danger is everywhere, not only from the planet itself, but the political machinations that seek to knock their entirely family down a few pegs.

It’s a big story, and one that’s filled with intrigue, backstabbing, war, and a coming of age tale to boot. As such, I’m not even going to attempt to recap it all here. In terms of an adaptation, this version of Dune is pretty damn great, and fans of the novel will have tons of things to enjoy. The attention to detail on several things is truly impressive, hitting on aspects other adaptations would normally ignore.

Of course, it’s not a direct adaptation and makes some choices to move the story along a bit smoother for everyone. Generally speaking, I’m impressed with the things they chose to cut, add, and streamline. The Bene Gesserit powers, for instance are given some clarity thanks to an early scene between Paul and Jessica (Rebecca Ferguson). It manages to quickly convey the fantastical abilities at play without any deep explanation.

Not everything works as good as it could have, however, and a couple things felt a bit too streamlined for the film. I never really felt there was any kind of feud/hatred between the Atreides and Harkonens. Maybe one specific moment with Gurney (Josh Brolin), but otherwise it feels like the only animosity between the two families is over the planet itself.

Considering their dynamic (a feud dating back thousands of years) is a core part of the story and decisions being made, it felt like a strange thing to have glossed over. That said, you still get the idea that the Harkonens are a special kind of awful, and they play up the villainous part expertly.

Similarly, the film does an extraordinary job of endearing you to the Atreides family and showing how close they are. An early scene between Paul and Leto (Oscar Isaac) got me all choked up! It was such a simple scene/moment (one not even in the novel), but between the dialog and acting, you could feel the familial connection and love.

In general, that sums up pretty much every scene in Dune. While some of the decisions regarding the story don’t always feel like the best, the execution/delivery is ridiculously impressive. Not a bad performance to be seen.

Villeneuve’s film doesn’t cover the entirety of the Dune novel. Instead, it puts the focus on their arrival on Arrakis and eventual betrayal that leads Jessica and Paul out into the desert. As they come across the Fremen people, Paul faces a big test that will ultimately set him on the path ahead. A path of revenge and salvation.

In many ways, it’s a pretty good stopping point, as the back half of the story has more than enough to justify another film’s runtime. Even so, there’s no denying that it certainly feels like you’re only getting part of the story. Much of it feels like it’s all setup with no payoff (a payoff you’d expect in the sequel), which I know some people might find a tad frustrating.

For me, however, all of the world-building and character moments are more than worthwhile. It’s immersive in a way that feels reminiscent of Peter Jackson’s Lord of the Rings. It’s a thing you’re watching not merely for the story, but for the world that’s been created. The sense of scale/scope sucks you in completely to the point where you feel you’re peering into the lives of these characters in a very real way.

Much like Fellowship of the Ring, it leaves you in a place that doesn’t necessarily feel like “the end.” Even so, you get the sense that this world is continuing on even without you watching on. Rather than than feeling slighted, I’m eager to return, even if it’s just a re-watch.

Much of this can be attributed to the overall production value of the film. Everything is GORGEOUS. The costume designs are impressive, bringing a distinctive (and instantly recognizable) look to all of the major factions involved. From the Bene Gesserit, to House Atreides, the Harkonens, and even Guild representatives, they all feel unique, while fitting into the universe created.

The same goes for the many vehicles. All of them feel like they’re pulled straight out of the novels, while bringing a sense of scale that Denis Villeneuve always seems to do so well. Combine the designs with the impressive camera work and visual effects, and the result is a stunning visual masterpiece where every frame feels like it could be a work of art.

Here’s a thing I feel I would be remiss if I didn’t mention. Frank Herbert’s epic borrows pretty heavily from Middle Eastern cultures. This is especially true of the Fremen who live in the desert, right down to using their language for several key words throughout the story.

As such, it feels kinda weird to have an adaptation in 2021 featuring no one of MENA descent in the cast. I mean, it feels like it would have made a lot of sense, especially in light of Denis Villeneuve’s comments about filming in Wadi Rum (outside Dubai) for “authenticity.” I mean, much as I love Javier Bardem, hearing him speak in his natural accent as Stilgar just…felt off.

It’s all the more frustrating as the film does a pretty awesome job of incorporating a wide range of diversity in every other aspect. From gender-swapping Liet Kynes (Sharon Duncan-Brewster is badass in the role), to cultivating a range of different peoples to fill out a number of roles big and small. With this in mind, the choices in representation regarding the Fremen just seem odd.

Then of course, there’s the idea of the “white savior” narrative which was an issue well before this version of the film came together. Honestly, I thought they handled that concept better than expected. At several points the characters go out of their way to make it clear the stuff being setup were specifically planted there to give them an advantage. Paul isn’t a true savior in that regard, though it’s still a bit of a tricky issue.

Arguments can certainly be made that the story of Dune, and Paul, isn’t a happy one. In fact, many of the things being presented (often from an Orientalist point of view), are done so specifically to show that they are bad and need to be stopped. Far from being a savior, Paul’s legacy is more terrible…But I don’t want to spoil anything for those looking to get into the novels.

The problem, however, is that we don’t get to SEE the full context of these things. Because this is only half of the story, it’s important to discuss it as an individual movie. We can’t simply wait for the sequel to see if it ultimately redeems some of these “not so great” cultural elements. Surely there will be people who don’t give any potential sequel a watch because of these very issues. Besides which, telling a people who feel under/misrepresented to “wait for the next film” just feels patronizing.

My sincere hope here, is that Part II manages to step things up. Since the setup for that movie would put us more deeply into the Fremen homes/culture, they have an opportunity to bring in some MENA cast members, and perhaps offer a better overall representation for the culture. In that way, maybe it’s good that they didn’t film both movies back-to-back, as it gives them a chance to make corrections. 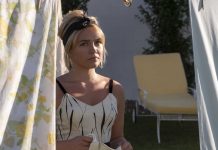