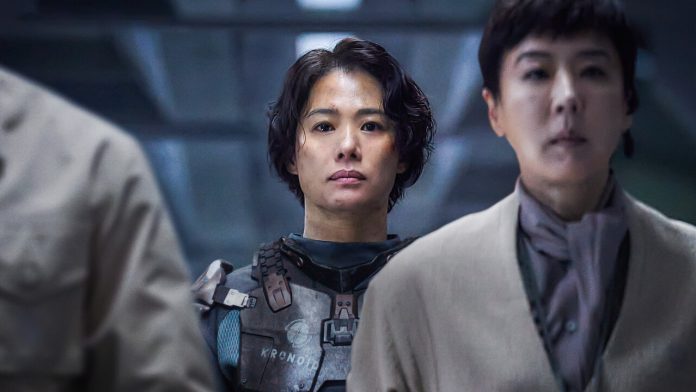 Between far out Sci-Fi action, the ethics of robotic AI, and questions of consciousness, JUNG_E is a surprisingly intimate story that mostly lands.

The Train to Busan director, Yeon Sang-ho, is back with an all new film on Netflix, but much of his storytelling ideals remain intact here with much to say on classism, the nature of humanity, and yes, even some exciting action sequences on a train. While some of the themes remain the same, the settings and stories couldn’t be more different.

JUNG_E takes place in the year 2194 as climate change has ravaged the Earth and forced much of the population to live in elaborate, ringed, space stations. As these things tend to go, however, civil war between some of the rings and the Earth breaks out, resulting in an on-going war.

Scientist Seo-hyun (played by the late Kang Soo-yeon, who unfortunately passed away shortly after filming) thinks she has the solution to end the war: craft a team of super-robot soliders using combat AI built from the memories of her own mother. Sounds kind of crazy right?

What’s neat about JUNG_E is how it establishes all this information relatively quickly. The movie dives audiences head first into the world they’ve crafted, and a fairly deep amount of lore and science, in just the first opening scenes. There isn’t a whole lot of exposition just being dumped on the audiences in one go, but rather it’s introduced in some fun ways that make sense with the story being told.

Regardless, it’s impressive how well many of the higher concept Sci-Fi elements are introduced so quickly and in a way that’s easy to comprehend. Essentially, humans have figured out how to download their brains/consciousness into robotic bodies, allowing them to live on. It’s expensive technology, however, and only the super rich are able to afford transfers that still allow them to…well, live with actual rights. Others can get it for free by basically signing their rights away, allowing corporations to BUY/use their consciousness in whatever way they choose. From house cleaning AIs, less savory things, and even developing war machines.

Like I said, some heady concepts here in the film, but the ease with which is conveys these ideas is truly impressive. Especially considering the film comes in just a smidge over 90 minutes long, it doesn’t waste time. Instead, it uses clever visual clues and carefully planned expositional dialog to ensure audiences understand the world that’s been established.

Anyway, Yoon Jung-e, was once the most well-known and celebrated mercenaries around (a dangerous job that paid for her daughter’s cancer treatments). Her prowess in combat vaulted her to legendary status, putting her almost as a superhero in the minds of the people; complete with action figures and such.

40 years prior to the events of the film, she failed in her final mission. While she was recovered, he body remained in a comatose state while her mind was given up to the government. Her now adult daughter, Seo-Hyun, is working tirelessly to isolated the parts of her mother’s brain that made her such an effective warrior in order to develop a series of robots who could finally end the war once and for all.

The problem, however, is she’s racing against the clock. Not only has her cancer returned, giving her only months to live, but the company she works for is already looking to shift their focus from combat to more mundane products. There’s a lot going against her and after years of work, progress seems at a standstill.

Accomplishing her task means taking her mom’s “brain” and putting them into robotic shells. They then run Jung-e through a simulation of her final mission to figure out what went wrong (this serves as the primary outlet for action in the film). Problem is, they can never get past a certain point, she always fails at the same point. After the tests, the robot is destroyed. So yeah, she’s essentially “killing” her mother with every failure…it’s wild.

As you can see, the film has much to say about the nature of artificial intelligence and what makes a person human. The callous way in which the scientists treat their robotic tests, despite carrying the minds of ACTUAL PEOPLE, is at once shocking and terrifying to process. Even among the action sequences, it’s tough not to think about the implications of practically being immortal, but having no control over yourself anymore.

By and large, I really enjoyed the overall story and ideas being presented here. The biggest hurdle for the film, however, is it’s not at all what you think it will be. The movie starts with a fairly kickass action sequence as Jung-e mows down hordes of robotic enemies in grand fashion. From there we learn more about this futuristic world and the inter-colony war that’s been raging. It FEELS like that’s what the story will be about; and yet it’s not.

Don’t get me wrong, I dug the more intimate story about Seo-Hyun and her mother. The coming to terms with morality and her own guilt is engaging, but it feels like the movie wanted to tell a bigger story than that. It’s a fun story within a larger one and there are plenty of moments where I found my attention drifting to the idea of what else was happening in that world, rather than the story I was getting.

Being such a relatively short movie also means the story doesn’t dive as deeply into some of these ideas as I’d like. Even as it brings up the idea of this class-based civil war, you never get to see it play out. While it discusses both artificial intelligence and transference of human consciousness, no distinction between them is made. For the most part they’re treated the same, though it FEELS like different issues arise from them.

The action also seems to pop-up at weird times. Almost like they forgot they were doing an action/sci-fi flick and decided to throw them in there once they remembered. Don’t get me wrong, the action is pretty great and the final act is ridiculously thrilling (pretty much making up for any shortcomings for the film in general), but the placement of them didn’t seem to jive with the overall flow.

All-in-all, I had plenty of fun with JUNG_E. While it hits on familiar story/action beats (the Elysium and I, Robot vibes are STRONG), they’re presented in an interesting way. Even when certain elements of the story don’t work, the actors manage to elicit some strong emotions out of you while watching. Combined with some slick world-building and action, this is a pretty good way to spend an hour and a half of your day!