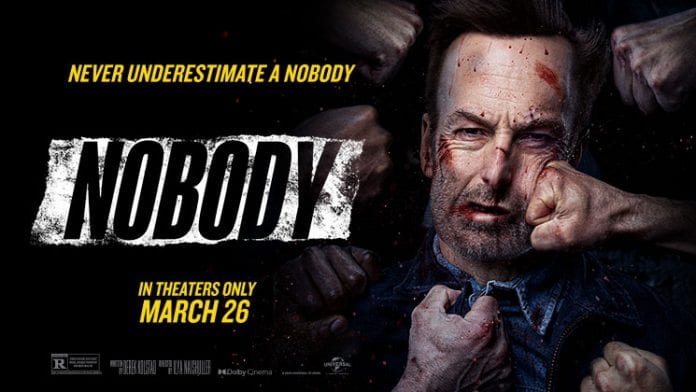 Nobody arrives in theaters this week, giving Bob Odenkirk an unlikely action-packed role that manages to deliver in ways beyond the action sequences.

Hutch Mansell is stuck in a rut. Mild-mannered and unassuming, the days seem to blend together for Hutch as he goes from work, with his in-laws, to home where only his youngest child seems to enjoy his company. It’s a stale lifestyle, one that gets shaken up when a pair of home invaders break into the house.

Seemingly overcome with fear, he ends up letting the attackers go, even as he has the chance to fight back. It seems cowardly and only seems to further strain their family relationship and Hutch’s general feeling of purposelessness.

Hutch, however, isn’t quite the ‘nobody’ he seems and has a past filled with secrets, and skeletons from the highest levels of the Government. He’s been retired for years, and seeking to live out a normal life, but as his family situation struggles, he feels the tug to cut loose and unleash his more violent abilities.

After an attempt to get back at those who robbed his home doesn’t go as planned, Hutch finds himself in need of an outlet. When a gaggle of drunken men begin accosting the lone women on the bus ride home, Hutch sees his outlet. There’s only one problem. While the action seemed to revitalize him, it turns out one of the men he put in the hospital is related to Yulian Kuznetsov, a Russian mob boss with some violent tendencies.

Looking to exact revenge, and restore confidence in his abilities among his peers, Yulian comes after Hutch with everything he has. In order to protect his family, Hutch will have to let the life he’s built up and return fully to his old ways and skillset. I won’t go further into the story elements to preserve spoilers, but ultimately there’s a large body count with a whole lot of ass whipping going on.

If you go by the trailers for Nobody, it looks like a blend of Taken with John Wick (leaning a bit more heavily on John Wick in terms of action). It’s one of the reasons I was both looking forward to the film and a little worried. With a script from one of the John Wick creators, I was concerned the movie would be more of a copy/clone than something that manages to stand on its own.

Thankfully, that’s not the case at all here. While there is plenty of action (hand-to-hand and gunplay) that’s reminiscent of John Wick, it plays out much differently in this film. In Nobody, you don’t get the continuous, bombastic, action scenes of the Wick films. They’re a bit more spaced out (aside from a finale that leaves you little room to breathe) and features a bit more exposition in between. This makes the film a little slower than what you would expect from the marketing, but the result are action sequences that seem to pack even more punch and oomph because of it.

The style of action is also different. Don’t get me wrong, Odenkirk does a phenomenal job and feels like a badass, but the story/visuals show that he’s older. He takes more hits, isn’t as flashy as others, but he’s brutally effective in a way that feels grounded and yet still over-the-top. It feels like the kind of “old-man badass action” that Taken WANTED to bring to the table, but only pretended at with flash cuts and shaky camera angles.

Take the bus scene, which features heavily in the film’s marketing, and serves as the catalyst for the rest of the movie. It’s not as one-sided an encounter as you would imagine, and Hutch takes almost as many licks as he gives out. We see him evolve throughout the encounter, however, as he sheds the simple family man persona and begins to recapture the magic of the person he once was. This approach to the action made it feel more believable and overall engaging as it felt intricately tied to the character’s story development. This pays off big time in the final 15-20 minutes of the film as his showdown with the Russian mobsters comes to a head. It’s hard to pinpoint exactly what feels so different about the action scenes in Nobody, but suffice it to say they worked on a different level for me than expected.

One of the things I loved most about the film was how it continued to infuse humor, organically, throughout the story. While plenty of action movies use humor, or comic relief, it felt almost like Nobody was designed to be both an action film and comedy. It doesn’t go over the top with jokes or anything, but Bob Odenkirk’s performance makes excellent use of comedy background. Combine that with a hilarious use of the soundtrack and the film keeps you alternating between laughing out loud and saying, “holy shit” at the action.

I wish there was a little bit more meat in terms of the subplot focusing on him and his wife (it’s clear she knows what he used to do), which wraps up a little too neatly/quickly. In fact, some of the more personal elements that make the action so engaging seem to get left behind. I get it, the film isn’t all the long, and once it starts on a specific story path, it doesn’t let up or leave much room for other stuff.

All this is to say the only issue I really have with the film still feels relatively minor. You’re still given characters you care about and feel realistic, with a concise story that could easily be expanded in the future. There’s a lot to love and I had an absolute blast from start to finish.