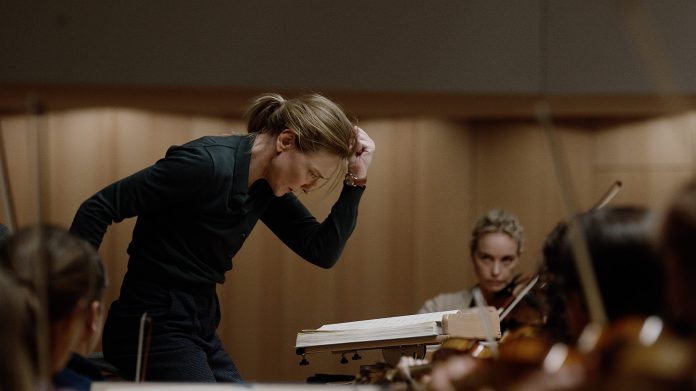 Tár, starring Cate Blanchett, is one of those films that will surely keep movie watchers debating for years.

Being the resident musicologist here at Cinelinx, Tár naturally grabbed my attention. A film that focuses on the modern world of composers and conductors is rare enough, but to have the same film starring Cate Blanchett as a renowned conductor? Well, that was something I just had to see.

I said at the beginning that Tár was one of those films that would keep people debating for years, and I meant it. This is because I think people will be discussing for a long time what the film actually is about. On the surface, the film presents famed composer and conductor Lydia Tár as she’s on the verge of recording Mahler’s 5th Symphony in Berlin. Tár appears to have it all: she’s recorded numerous albums, she’s published a book, she has the respect of her peers, all that a musician could ask for and more. And yet…the film continuously drops hints that all is not well in this world of music that Lydia reigns over.

This is where I run into a wall with Tár. The problem, for me, is that the director is very oblique in how he presents what’s going on to the audience. We get hints, we see glimpses, many dark things are implied. However, at no time is the full story tied together or spelled out. It could all be true, it could all be lies, it could be a combination of both. But it is never made plain and that grated on me as the film continued. In a similar vein, the film introduces a number of seemingly important plot threads that are never resolved. Perhaps this was intentional, to make it more obvious how Lydia’s life slowly comes apart, but the lack of resolution was rather irksome at times.

That being said, while I feel that Tár as a whole will spark debate on what all it’s trying to say, I think all will agree that Cate Blanchett turns in the performance of a lifetime in this film. The scenes where she’s conducting the orchestra are phenomenal. Whatever else we are meant to think of Lydia Tár in this movie, it’s undeniable that this is a woman who lives and breathes music, for better or worse. Blanchett fully embodies this character, and the range of emotions she puts forth onto the screen is almost indescribable. Whether you love the rest of the film or hate it, you will feel many things about Lydia Tár thanks to how Blanchett plays her.

One other thing the film gets right that I wanted to particularly mention are all of the scenes featuring musical performances (and there are more than a few). Here, the director absolutely hit the nail on the head. If you’re going to have a film that centers on a composer and conductor, then a good portion of the film needs to focus on the music and that’s exactly what Tár does. In fact, the film covers this part so well that I was strongly reminded of my time as an orchestra student. Many facets of an orchestra are covered: rehearsals, auditions, all the internal politics that go on between the musicians and their conductor. If you want a good idea of how professional orchestras function these days, you would learn much from watching Tár.

And so I find myself having mixed feelings about Tár. On the one hand, I love this film because of Cate Blanchett’s performance and how much of the film is devoted to music. On the other hand, I’m frustrated by how coy the film is in revealing what’s actually happening. Where does this leave us then with how the film rates overall? Well, as I hinted in the title, if you have great patience, you will thoroughly enjoy the deep dive Tár takes into the musical world. There is a good story to be found here, but it’s told at a very leisurely pace. If you’re expecting a plot that promptly unfolds, then this probably isn’t the film for you.