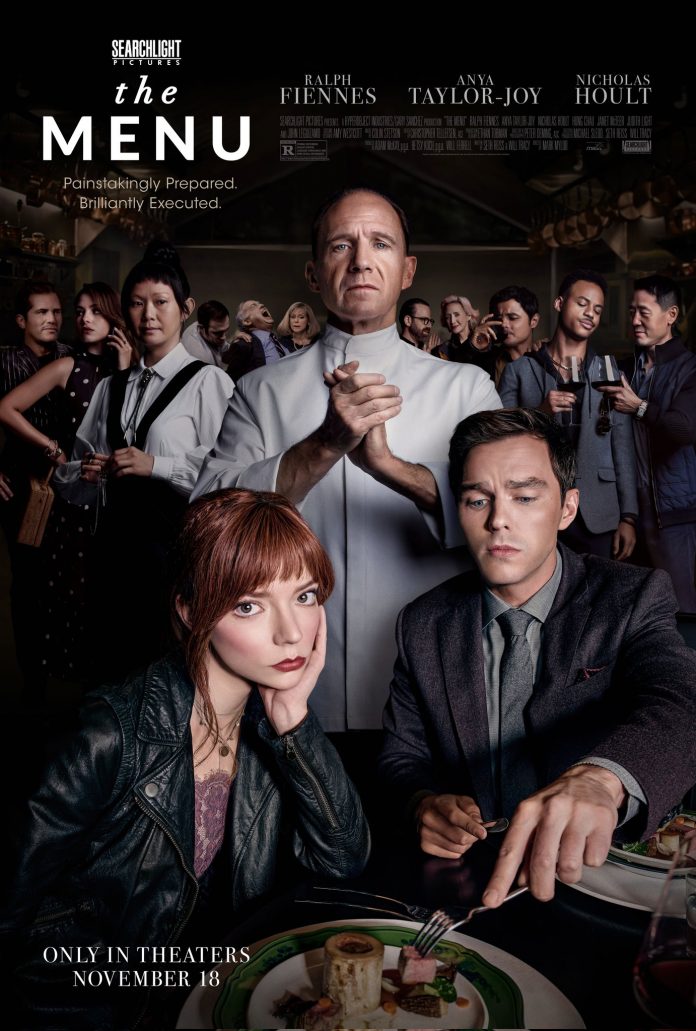 The Menu, directed by Mark Mylod, provides an experience that viewers won’t soon forget for all the right reasons.

My curiosity was pricked by The Menu this past summer when I first saw the trailer for this film. As the story was centered around a culinary experience but clearly had a horror element, I thought I knew what the story’s big twist would be. As it turns out, I was wrong, as director Mark Mylod had something far more clever in mind than anything I could imagine.

The Menu is, pardon the pun, a delightful blend of comedy and horror that left me enraptured from beginning to end. The story takes place on a remote island that’s home to a ridiculously exclusive restaurant. One of those places only the super-wealthy can afford. The head chef, played brilliantly by Ralph Fiennes, has promised an unforgettable menu but the guests, including Margot (Anya Taylor-Joy), quickly find out that there’s more than food on this “menu.”

As I mentioned before, the story of The Menu carefully mixes together comedy and horror, never lurching too far into one or the other. What’s really striking about all of it is how it’s presented to the audience. Unlike other comedy/horror stories where the action spins out of control once the horror element really gets started, The Menu is remarkably restrained. There’s an almost unbelievable amount of order permeating this story, not something typically associated with horror but here it works perfectly. I think this is because the story centers around a professional kitchen, a place that has to be one of order at all times.

While the characters played by Ralph Fiennes and Anya Taylor-Joy receive the most attention, the others are not neglected. The story does a good job of filling in the blanks of the other diners, making it easier to care (or not, as the case may be) about what happens to them as the story progresses. Particular note should be made of Nicholas Hoult. His character, Tyler, has a particularly interesting story arc, not least because it’s unpredictable and goes to places you might not expect.

Another element of The Menu that I particularly loved is the sheer artistry that can be found throughout the film. Of course the food presented in the film is the most obvious example of art as it truly is exquisite to look at. But the film takes it further: the shots of the island the restaurant is based, with its raw, natural glory, is a stunning contrast to the minimalist space that contains the kitchen and the restaurant. There’s even artistry in the way the chefs move about as well. If you watch them carefully during the film, there’s a precision in the way they move and serve the dishes that creates its own patterns. With such a level of artistry, you’re guaranteed to notice new details each time you watch the film.

Finally, I have to talk in general about the by-play between Fiennes’ character and Anya Taylor-Joy’s character that runs throughout the film. I said before that their characters receive the most attention, and this is for the best because their entire story arc left me enthralled. Their conversations have multiple layers to them, so that when one says something you know something else is being implied at the same time. And that final scene between them…I can’t say any more because of spoilers but I have to at least say that that last moment is one of my favorite scenes I’ve seen this year. It makes the entire movie.

While I have seen many films this year, The Menu is easily one of the best and should definitely be mentioned more than once come awards season. The performances are brilliant, the combination of horror and comedy is on point, and I guarantee you will never look at fine dining the same way again after sitting through this movie.