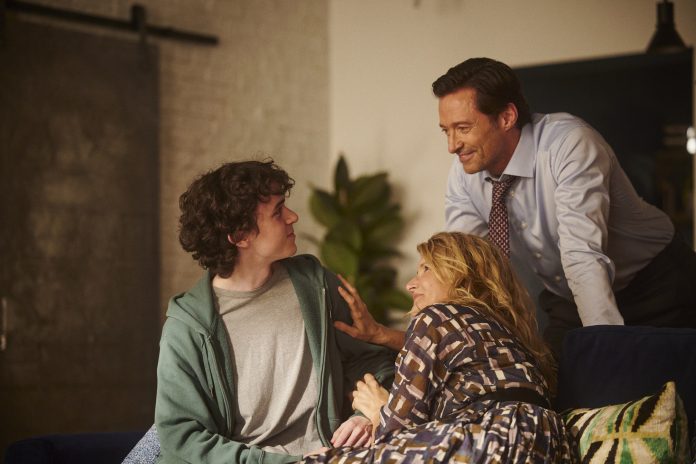 After hitting the festival circuit last year, The Son arrives in theaters this week bringing powerful performances but not much else.

Based on a stage play of the same name, director Florian Zeller dives back into the world of his Academy Award winning story, The Father. While The Son ostensibly serves as a prequel to the 2020 film (itself also based on a play Zeller wrote), the connection between the two films/stories is minuscule to the point of not even mentioning. It very much serves as its own story, and aside from ONE scene, there’s not much connective tissue there. So if you haven’t seen The Father, you won’t be lost.

The Son puts the focus on Peter Miller (Hugh Jackman) as he navigates a busy office life with a new partner Beth (played by Vanessa Kirby) and newborn child. Things get more complicated, however, when his ex-wife Kate (Laura Dern) shows up to discuss the problems their teenage son is having.

From skipping school for weeks on end, to feeling lost/listless, it’s clear their divorce has seriously impacted Nicholas (Zen McGrath). Peter’s new life is upended when Nicholas asks to move in with him instead. At first, things seem to be going okay, but as Peter tries to attend to his son’s needs, he finds himself sliding backwards into some bad habits he learned from his own father.

As things appear to be going smoothly on the outside, Nicholas’ spiral continues to escalate. I’m not diving into any spoilers here, so that’s really about all I can discuss regarding the plot. For the most part that’s the whole movie! It’s a window into the lives of these characters as they deal with Nicholas and the increasing tension between all of them. It’s actually one of the main issues I have with the movie, but let’s talk about the good stuff first!

The acting is insane. Seriously, all the performances given in the film are excellent and pulled me into each scene effortlessly. From the big dramatic moments, to subtle movements and facial expressions, everyone in the film is firing on all cylinders. The result are characters that feel unique and real. There’s a genuine sense of these characters existing and having lives that go well beyond what we see on the screen. Despite having some big names attached, there’s never a time where I felt like I was watching these actors. I didn’t see Hugh Jackman, I saw Peter. It’s pretty damn impressive.

Generally speaking, the movie is also competently shot. There are some great framing during the conversations that help emphasize the dialog and even emotions the characters are going through. That said, it very much feels like the stage play it stems from. So much of the blocking and “action” take place in singular settings and it’s easy to see how it would look if you were watching it live on a stage. It’s well-shot, but nothing about it feels unique to the screen either.

And well…that’s about it. Don’t get me wrong, the film kept me engaged due to the strength of the acting and drama they were going through. As I’ve thought about it more after the credits rolled, however, the weaker it has felt to the point where I think I’m more grumpy than anything now.

Throughout the film and even when it first ended, I was caught up in the raw and very visceral emotions on display as the story moved along. There’s a powerful element to it, especially as a parent to a teenager myself (one who’s been through a divorce), and I found it terrifyingly easy to put myself in the shoes of these characters.

With some distance from the viewing, however, those initial feelings have faded, allowing me to look at the events and characters with a bit more of a detached lens. It’s here the flaws become ever more apparent, namely in that there really is not overarching “story” going on. Things just kind of happen, and aside from getting a glimpse into a specific period of time in the lives of these people, there’s no sense of purpose in the story being told.

I’ll be the first to admit that most “slice of life” style plots aren’t my thing and never have been. I’m a traditional plot structure kinda dude. That said, I can still get down with those stories when it feels there’s a general point to the slice of life we’re seeing. Some lesson to be learned, or growth shown within the characters. That doesn’t happen in The Son.

On the surface, there’s the idea/theme of Peter doing what he can to be a great father while chasing his own dreams, all without falling into the pitfalls of his own negligent, over-working dad. There are hints about how his previous marriage ended, and how he was already dating his current partner before it was over. Plus some insinuation that he’s working too much and potentially ignoring his new child as well. So there’s the idea that he’s not a good father and needs to work on stuff.

But here’s the thing, all we see in the film is how he’s trying. Aside from some passing mentions about stuff, everything the film shows us is how hard he’s trying and that he is willing to make sacrifices to be a better man. We see this on the part of Beth also as she struggles with being a step-parent. Hell, even Nicholas, despite his severe depression, seems like he’s working to make things better in his own way.

Which makes it all the more frustrating that the film ends on a massive bummer and all the efforts made amounted to absolutely nothing. More and more, it seems the overall point being made in the film is just about making the audience feel terrible. The scenes are designed specifically to hit you in the feels (which is does expertly), but there’s no purpose behind it other than that.

Without purpose, or grander theme, everything about The Son just comes off as…manipulative. Making you feel terrible in an effort to mask the fact it doesn’t have much else to say. And that’s not to mention the not so great depictions going on with mental illness in general. I won’t dive into it more here, but suffice it to say, it’s not great.