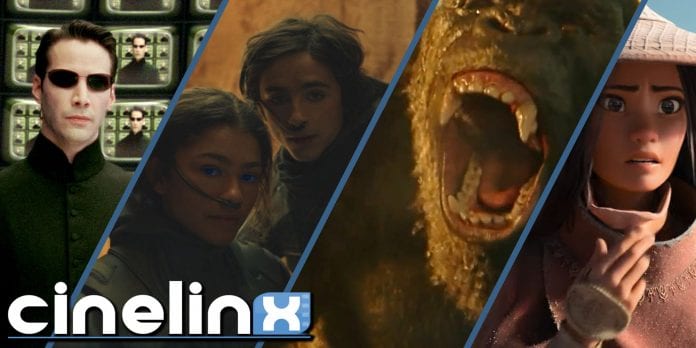 2020 is on the way out and ahead of the holidays our team is taking a look at the films we’re looking forward to most in the New Year!

Like the rest of you, we’re more than ready to finally put 2020 into the rear view. It’s been a strange year (even more when it’s come to movies) and the result is an insane amount of films to look forward to in the New Year. While it’s a little early, we’re all ready to be done with this year and eager to have something fun to look forward to.

Of course, with the pandemic ongoing, things are still constantly changing. Even so, we’re looking forward to these films with a heap of hope and enthusiasm. Dune – Perhaps even more than Star Wars, Dune is the science fiction property that has had the most influence on me. I’ve read it countless times (just finished a re-read of the full series this month) and considering Denis Villenueve’s overall body of work, we could be in for something special here.

Godzilla vs. Kong – I loved Godzilla: King of the Monsters, even though I know some kaiju fans weren’t as thrilled with it. Between that and Kong: Skull Island (which is also incredible and great on the rewatch) I’m dying to see these two face off in a modern action film. There’s a lot of potential for iconic moments, while giving us some delicious eye candy.

Uncharted – Considering the amount of times I’ve made jokes about this seemingly cursed movie adaptation, I’m very eager to see if Sony can pull it off. Considering they worked closer with the developers behind the game on this new story, and the one image we’ve seen so far, I’m more hopeful for the film than I expected.

Shang-Chi and the Legend of the Ten Rings – With all of Marvel’s slate moved to 2021, there is plenty to look forward to in the next phase of the MCU. Even so, Shang-Chi is definitely the one I’m looking forward to most. Mostly, I’m just anxious to see a major Martial Arts action movie and all the Marvel connections are just icing on the cake!

The Matrix 4 – The Matrix is one of my all time favorite films/franchises, and hit right at a time when I was already heavy into Martial Arts. Between the action and themes it continues to resonate even all these years later. As such, I’ve been on the hype train since they announced a new film was in the works. I can’t wait to see what the new story brings and how the action will play out.

Honorable Mentions: The Suicide Squad, Ghostbusters: Afterlife, Venom: Let There Be Carnage, In The Heights, Raya and the Last Dragon, No Time To Die, Spider-Man 3

There are A LOT of movies I’m looking forward to next year, since almost everything from this year got pushed to 2021. However I’m really looking forward to watching those movies from home and I truly hope what Warner Bros is doing with HBO Max next year works out fine and becomes a thing that they continue for years to come. So let’s get to those films that I’ll probably have to wait for home release to watch:

Almost anything based on a MARVEL comic book (yes im putting it all as ONE, I don’t make the rules I just break ‘em)

Ghostbusters: Afterlife – I liked the 2016 movie and I’m sure I’ll like this one too.

The Forever PURGE – if you know anything about me you’d know how much I love the Purge.

No Time to Die – see uncharted explanation, but with James Bond. There are a lot of movies coming in the next few months, but damn are there some heavy hitters coming next year! With the global pandemic still going strong due to ridiculous amounts of people not taking the precautions necessary to save lives, we will be at home and closed off to the world once again soon.

With that in mind, many studios have really stepped it up and decided to launch some great movies on streaming services. I am very excited to see all these movies in my personal theater at my home with my family and hope one day we can all enjoy the theater experience again!

THE SUICIDE SQUAD
NO TIME TO DIE
HALLOWEEN KILLS
TOP GUN MAVERICK
THE CONJURING: THE DEVIL MADE ME DO IT
DUNE
BLACK WIDOW
GODZILLA VS. KONG
MORTAL KOMBAT
UNCHARTED
Ghostbusters: Afterlife (Cause Rob reminded me!) After the year we have all had, it is nice to take comfort in some highly anticipated upcoming films in the new year! Here is a list of some of those that I am most looking forward to in 2021:

Raya and the Last Dragon (the trailer really hooked me!)

Matrix 4 (I support all things Keanu)

The French Dispatch (an all-star cast and every scene looks like an artwork or stylized photograph. I’m in.)

Candyman (love me some spook!)

So I may just be repeating my list of most anticipated for 2020 (mostly), but that’s because so many things were delayed. Anyway, I’m looking to 2021 with cautious optimism…

Dune – Dune is one of my favorite novels, the David Lynch version holds a special place in my heart, and Jodorowksi’s version sounds to me like the greatest film never made. This new adaptation is directed by one of my favorite directors who only makes really good movies, it will be scored by Has Zimmer, and the cast is star-packed. So yeah, I’m excited for this one, and very bummed I haven’t been able to see it yet.

No Time To Die – Okay, the last Bond movie was bad. But this one has my hopes up for a number of reasons (despite feeling like the most delayed film imaginable). First director Fukunaga is a creative mastermind, the plot outline seems like a welcome diversion from what the series has been doing so far, and as Craig’s last Bond film you know they will go big.

Last Night in Soho– I still don’t know much about this movie, but the fact that it is directed by Edgar Wright is enough to catch my attention. The cast looks really great too.

Mission: Impossible 7 – Did you see how great the last films were with McQuarrie at the helm? I have full faith he will find a way to outdo himself again.

The Last Duel – Ridley Scott’s latest film feels similar to his first film, Duelists. While it isn’t closely related to his debut film, I am interested to see how he approaches the topic and see if it works as a good comparison to see how he has grown as a filmmaker. It also stars Ben Affleck and Matt Damon, so that’s good too.

Honorable Mentions: Old, The Green Knight, Shang-Chi and the Legend of the Ten Rings, Top Gun: Maverick, The French Dispatch Where to even begin with my most anticipated films of 2021? So much has been delayed, it’s hard to pick the films I’m looking forward to the most. Just so you know, I’m pretty much looking forward to all of these films equally, but these are the ones I really want to give a mention to:

Raya and the Last Dragon – Disney has been on a roll lately with its animated films (Frozen, Tangled, Frozen II, Moana all come to mind) and Raya and the Last Dragon looks to be more of the same. I LOVE the look of this film, and the fact that (so far) they’re keeping the titular dragon offscreen. This is the Disney film I’m looking forward to the most next year for sure.

Morbius – I freely admit there are only two reasons why I’m looking forward to Morbius: It has Jared Leto in the title role and it involves vampires (to a certain extent). That being said, there’s also the fact that Morbius looked really cool in the previews and I really want to see if the film lives up to the hype.

Dune – Like others on this list, I too am looking forward to Dune. I resisted jumping on the bandwagon for the longest time because I am deeply in love with the 1984 film. But once I saw that trailer….my God….I was in!! If the film is half as amazing as that trailer….we have a genuine masterpiece on our hands (and hopefully a chance to adapt the rest of the Dune story to film).

Godzilla vs. Kong – I still don’t see how we can have a fight between Godzilla and Kong since they’re both “good guys” of their respective films, but Godzilla: King of the Monsters wowed me so much that I’ll happily put my reservations aside to see how the story goes. One things for sure, this is bound to be an impressive looking film, just don’t ask me who I think will win, I can’t possibly pick between the two.

F9 – Yea I’m looking forward to the next over-the-top installment of the Fast and Furious story if only so I can find out HOW John Cena’s character can possibly be Dom’s brother. To introduce a hitherto unseen brother NOW (9 films in) will take some very fancy storytelling and I can’t wait to see it.

Honorable Mentions: In the Heights,Shang-Chi and the Legend of the Ten Rings, Jungle Cruise, Eternals, Mission Impossible 7

Even with all these, it is nearly impossible to incorporate everything we’re truly excited for. Now that you’ve seen our picks for the most anticipated 2021 films, we’d love to know yours!