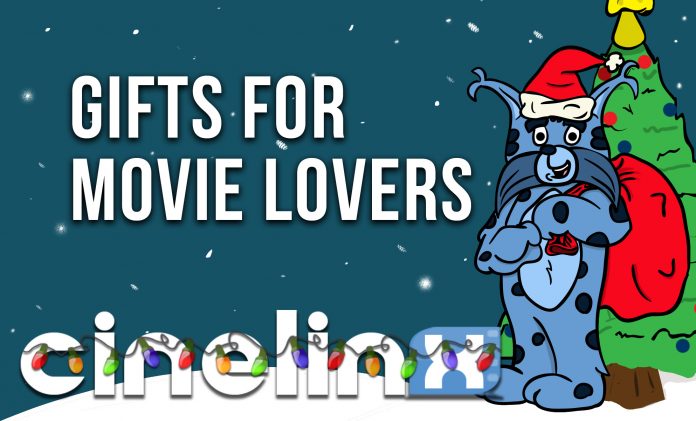 As we’ve done in years past, the Cinelinx team is here to help you find the perfect gift for nerds in your life. Today, we’re breaking down the best movie and TV gifts.

To kick things off, we’re looking at gifts related to movies and television. If you need MORE ideas, be sure to hit up our Geek Pick of the Week choices for some great items as well. Now, let’s get to it!

Of course, there’s no better gift for movie lovers than the Cinelinx Card Game! And wouldn’t you know it, we have the core game back in stock, along with plenty of booster packs to extend you games.

[Note: Many of the links included below are affiliate links.]

Mad Max Anthology 4K – Yes, this is far from the first Mad Max boxset that’s come out, and I’m pretty sure it won’t be the last either. Even so, considering this new set brings Road Warrior and Thunderdome to the 4K format for the first time ever, that’s definitely worth it. If you already have the others in 4K, thankfully WB is releasing those other individually so you don’t HAVE to buy the Anthology, even though it does look pretty…

Dune Movie Book Ends – I’ve had my eyes on this since it was announced just a little bit ago. Not only is this perfect for fans of Denis Villeneuve’s new Dune movie, but it also works perfectly for lovers of the novels. Since I’m all about BOTH of those things, you better believe this gorgeous bookend set from Dark Horse Direct is high on my Christmas list. Since they’re limited editions, it’ll certainly make for the perfect gift.

Vintage Movie Posters – If you’re an old-school movie fan, or just love the look of classic posters, these are pretty damn cool. Turner Classic Movies has a handful of vintage poster recreations available for you to buy and frame. While I wish they had a little bit more of a selection, the style and vibes are really damn cool.

The Story of Marvel Studios: The Making of the Marvel Cinematic Universe – This book, well it’d be more accurate to call it a TOME, is the perfect gift for any fan of comic book movies. This massive reference book goes way behind the scenes of the MCU, offering never before seen glimpses into how this massive “experiment” came to be, the challenges faced, and how they pulled it all together. Even if you’re not big into comic book movies, these offer a fascinating look at franchise filmmaking.

The Goonies: Never Say Die – Though I touched on this in my Geek Pick of the Week of Funko Games’ new offerings, I feel the Goonies board game (which you can find at Target) deserves another mention here. It’s a fun game that doesn’t take up too much time and hits that nostalgia spot for just about every movie buff out there.

Besame Cosmetics Disney Princess Compact – For movie-themed gift ideas, I must recommend the Besame Cosmetics Disney Princess compacts! Besame’s signature compact and lipstick collection teams a Disney Princess compact with a complimentary lipstick. True to Besame form, the packaging is exceptional which is perfect for a gift. Twelve princesses are included in this line – Belle, Mulan, Ariel, Aurora, Jasmine, Cinderella, Pocahontas, Rapunzel, Merida, Tiana, Moana and Snow White – and while many of them appear to be sold out (or yet to be released) on the website, I suggest calling the boutique in Burbank. Sometimes they sell out fast online but can be called in and ordered over the phone at the store.

The Noble Collection – I am probably exceedingly late to this party, but I recently discovered the finely crafted Harry Potter treasures available at The Noble Collection. WOW, these products are beautiful and perfect for the HP fan in your life! Not a HP fan? There are plenty of other fandom treasures available on the site, including Lord of the Rings, Game of Thrones, DC Comics, Jumanji and more! The only cautionary advice I should mention is that some items are backordered, so make sure you get any orders in ASAP so they arrive timely!

Star Trek The Original 4 Movie Collection 4K – I’ve spent the last 2 years making my way through Star Trek from the very beginning and the original movies are just straight up fun, I know they’re generally mixed in reception with alternating quality but I just think they are the best place to go for some sci-fi fun. So the opportunity to rewatch these classics or maybe even step into Star Trek for the first time with these stunning remasters is one you shouldn’t miss and I definitely won’t be.

Rocky 45th Anniversary Funko POP!s – Another franchise I was exceedingly late to but is super fun and I would now consider myself a fan of. For the countless Funko fans out there this is a great purchase, whenever Funko go back to make merch for a classic it’s a welcome sight to be able to buy merch for properties you rarely find the opportunity for otherwise.

Dune (board game by Gale Force Nine) – Like Frank Herbert’s seminal novel, Dune, the board game version has been around a very long time. It was out of print for decades, but now that the new film adaptation is in theaters it was brought back into production with upgraded production and artwork. For those who are board game enthusiasts, it represents the return of one of the most heralded games ever made that very few got to play. The board game interpretation of Dune is complicated, frustrating, and uneven, but it is unlike anything else you’ll find for sale today. They even released a special version with artwork from the 2021 film. Dune fans rejoice!

Mulholland Dr. The Criterion Collection 4K UHD – A 4K release of David Lynch’s magnum opus and one of the greatest films ever made? Yes please. Mulholland Drive may not be for everyone, but for those who like a complicated movie watching experience this is an opportunity to dive into the deep end. In addition to a new 4K restoration, this release features interviews with the cast and videos from the production on set. Mulholland Drive is one of those movies that begs for repeat viewings, and with this release you’ll get the latest and greatest version.

Underworld 4K Box Set – As a long time fan of the Underworld films (yes, even Blood Wars), I was over the moon with excitement when a 4K box set of all five Underworld films was released late last month. This box set is a must have for any fans of the film series, it comes in a gorgeous case and features all five films in separate 4K cases with cool slipcovers.. There’s also all of the special features associated with each film. This would make a fantastic gift!

Dune 4K from Arrow – No, this isn’t the Dune that just came out, this is a special 4K release of the 1984 Dune that David Lynch directed. While I deeply love the new Dune, the 1984 film will always have a special place in my heart. This special 4K release from Arrow is loaded with a bunch of special features, some old and some brand new, plus a bunch of extra goodies if you order the exclusive box set. It’s great to see one of my favorite films restored to a beautiful clarity.

Black Widow – Given that we had to wait several years too long for a standalone film about Black Widow, you better believe I’m recommending Black Widow as a holiday gift. I particularly recommend the steelbook edition of the film if you can find it, as the cover design is beautiful. And of course the film itself is one of the best I saw this summer.

Build-A-Bear – Got a special someone in your life? Want a unique, adorable gift option but still relating to their interests? Well, the perfect gift may well be here! Build-A-Bear has a range of geek-inspired bears, with the prized jewel this holiday season being the Christmas Grogu bear. Complete with an adorable Christmas outfit and built in Baby Yoda sounds, it’s ideal for any Star Wars fans in your life. Their Star Wars line doesn’t end there either, they also have Banthas, The Mandalorian, Boba Fett, Ashoka, and many other Star Wars themed bears and bear outfits. If Star Wars isn’t your thing, there’s Marvel, DC and Disney inspired bears and accessories too.

A Die Hard Christmas: The Illustrated Holiday Classic – Yippee ki yay!  While I was trying to think of something for my list, I came across this gem.  This is perfect for the avid fan who agrees Die Hard is a Christmas movie, or even for someone who avidly disagrees which means it’s open season for teasing them.  It is an illustrated storybook reimagining of “Night Before Christmas” in Die Hard style.

Personalized Retro Video Tape Poster – This piece is great because you can cater to your favorite movie buffs tastes as you can personalize what movie titles appear on each VHS tape.  It would make a great addition to whatever movie viewing set-up you have at home.  Furthermore, it is such a unique gift there is a good chance the giftee does not already have one in their possession.

Moving Pictures on the Bookshelf

The Art and Soul of Dune
Woke Up This Morning: The Definitive Oral History of The Sopranos
The Beatles: Get Back
Dark City: The Lost World of Film Noir (Revised and Expanded)
Star Wars Year By Year New Edition

I Speak Fluent Movie Quotes Mug – I’m not going to lie.  I need this, and so does any true movie fan that regularly uses movie quotes in everyday conversation.  It would be a great little gift by itself, or paired with a graphic t-shirt of their favorite movie.

Single Serve Popcorn Maker – I know, I know, when you’re watching movies it’s customary to get that big tub of popcorn.  However, this is great for when you’re home alone watching movies or if you’re just the only one craving popcorn.  I know it’s cinema blasphemy, but it happens!  You simply fill the kernels to the line, pop it in the microwave, and the lid opens when the cooking is complete.  Add some popcorn and candy, and you have a great gift!

Need more Christmas gift ideas? Then keep your eyes peeled for our gaming and geek gift guides coming up as well!