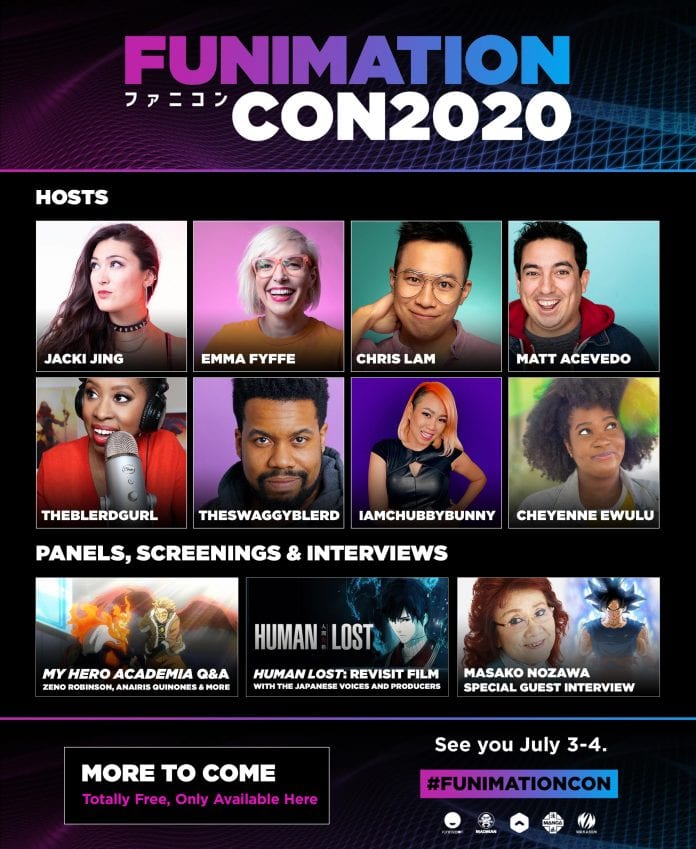 Next week, Funimation will host their virtual festival, FunimationCon 2020. Preparations for the anime showcase continue to be solidified, but the anime giant announced some exciting new panels and people taking part in the event.

Today, Funimation announced that they have added a My Hero Academia panel, as well as a Human Lost panel. Furthermore, they confirmed that Toei Animation will be presenting an interview with voice acting royalty. The Japanese anime company will have an English-language interview with legendary voice actress Masako Nozawa. Nozawa’s career spans for over 60 years. She is most widely known as being the voice of Goku in Japan. You can learn more about the hosts and moderators, as well as further information on each new panel and previously announced activities, below.

Human Lost: Revisit Film with the Japanese Voices and Producers

Have you ever wanted to provide feedback to Japanese creators? This is your chance! The producers of Human Lost want your opinions while the Japanese voice actors talk about their experiences from Human Lost. You will have the chance to see Mamoru Miyano and Kana Hanazawa, only at this event!

Toei Animation presents an exclusive English-language interview with Nozawa-san, the Japanese voice actress for Dragon Ball’s protagonist Goku. Don’t miss this special opportunity to hear from her as she answers questions about her career and what it’s like to voice many of the most iconic roles in the world. The discussion is recorded from Japan with English subtitles.

So You Want To Be a Voice Actor? With Charles Solomon

Matt Acevedo is a first gen Cuban-Mexican producer, comedian, and host. He has been featured on a number of networks including Oh My Disney, Nerdist, HyperRPG and Funimation. Follow him @TheMattAcevedo on Twitter, and at www.themattacevedo.com.

Michelle Nguyen Bradley, also known as “ChubbyBunny,” is a long-time anime and manga industry veteran. She currently writes, produces and hosts the #GotManga Viz Summer Reading Club. You can find her on all social media as @iamchubbybunny.

Emma Fyffe is an entertainment and pop-culture pundit and host, seen on broadcasts across the internet. Starting her career as a Sailor Moon podcaster hosting her own, independently produced “Love and Justice” and well as AfterBuzz TV’s “Sailor Moon Crystal After Show”, she was a regular on Fandom Entertainment’s “Screen Junkies Universe”, and Collider’s “Jedi Council” and “TV Talk”.

Karama Horne (a.ka. “theblerdgurl”) is a freelance pop culture journalist parked at the intersection of geekdom and diversity. Ghost in the Shell was her gateway anime and she’s really never met a mech she didn’t love.

Jacki Jing is an Amazonian Super Hero Ninja wannabe by moonlight and a nerdy host/producer by daylight. Anime’s her jam and Tuxedo Mask is her main man — him or Batman. Follow her @jackijing.

Winston A. Marshall is an actor, comedian, on-air personality and self proclaimed “Swaggy Blerd” (Black Nerd).  He is a proud native Texan of partial West Indian descent, who lives and breathes entertainment.

Lauren is a host and full-time Content Production Manager at Funimation. She’s originally from the Caribbean, but these days you can find her gushing about anime on-camera in original videos, on-stage at conventions or on the red carpet.

Josellie is an Audience Development Strategist and host of the One Piece at a Time podcast at Funimation. She hails from “la Isla del Encanto”, and has been working with fan content and strategy for over seven years. Find her talking about soccer or the reasons you should be watching Kaguya-sama: Love is War on social media at @josellierios.

An internationally respected critic and historian of animation, Charles Solomon has written for the New York Times, Newsweek (Japan), the Los Angeles Times, Variety, and National Public Radio. His books include “Tale as Old as Time: The Art and Making of Disney’s Animated Classic Beauty and the Beast” (Disney Editions, 2017) “The Art of the Disney Golden Books (Disney Editions, 2014) “The Art and Making of Peanuts Animation: Celebrating Fifty years of Television Specials” (2012), “The Toy Story Films: An Animated Journey” (2012),), “The Disney That Never Was” (Hyperion, 1995), and “Enchanted Drawings: The History of Animation” (Knopf, 1989; reprinted, Wings, 1994), which was a New York Times Notable Book of the Year and the first film book to be nominated for a National Book Critics’ Circle Award. He contributed essays to the exhibit catalogues of “Japanese Animated Films: A Complete View from their Birth to ‘Spirited Away’ and Beyond” (Tokyo Museum of Contemporary Art, 2004) and “Il était une fois: Walt Disney ” (Grand Palais Museum, Paris, 2006). Solomon also teaches the history of animation at UCLA and Chapman University.

Hosted by Funimation, FunimationCon 2020 is totally free to attend and available to fans in the U.S., Canada, U.K., Ireland, Australia, and New Zealand. Registration is open so head over to FunimationCon 2020 (www.FunimationCon.com) to secure your spot and receive updates on new events added to the line-up.

The new panels and merchandise join a growing list of exciting events to celebrate anime including:

FunimationCon 2020 celebrates the skill, artistry and passion for Cosplay with panels bringing together some of the biggest and most influential personalities including Yaya Han, Riddle,  Phil Mizuno, Dressesandcapes, Alicia Marie, and Stella Chuu. Panels include a Fireside Chat with Yaya Han, Pro Vs Pro!, Beginner’s Cosplay Crafting with Stella Chuu, and Learn to make masks from home with Riddle!

Ori and the Will of the Wisps Launches Today for Nintendo...