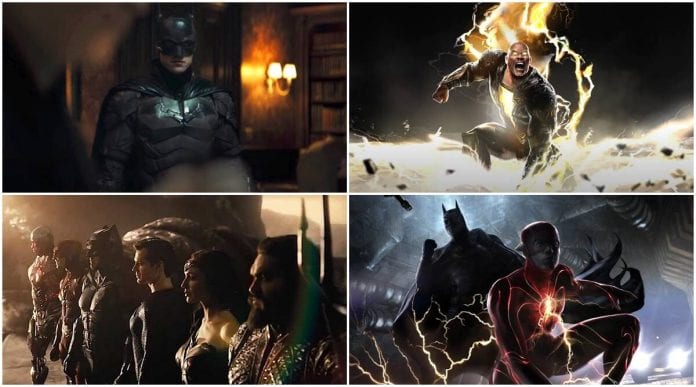 DC FanDome brought a full day’s worth of exciting panels and announcements. Our contributors have gathered to share their favorite moments.

No one was quite sure what to expect from DC/WB’s all digital event, but DC FanDome delivered on the experience in a big way. Between interesting panels and a ridiculous amount of reveals there was something for every fan to enjoy. Today, we’ve put our contributors to task by forcing them to pick just ONE moment from the event they thought was the best:

While the highlight for many was the first trailer for The Batman, I’m still enamored with the conversation that preceded it. For 20ish minutes leading up to the trailer, Matt Reeves spoke at length about his love for the character. The passion in his voice and details he went into were so evident, it was genuinely infectious.

While he only offered up minor details, deftly avoiding major plot points, you could see the care and attention he’s putting into every little thing. Seeing his excitement grow, even as he answered fan questions, brought me to a new level of hype I wasn’t expecting. His fast-talking geek out was incredibly endearing and only proved he’s the right person to bring a new incarnation of the Caped Crusader to the big screen.

DC FanDome was a rip-roaring success, there’s no doubt about that. Aside from the occasional lull (CNN? Really?), it was a captivating event from start to finish for the DC fandom. Indeed, the day was filled with great reveals, interesting conversations, and bombshell teasers.

And although The Batman presentation certainly garnered a lot of attention online, for me, Zack Snyder’s Justice League trailer was the feature presentation.

While not necessarily a traditional trailer and more of a clip show, it was our first good look at what kind of alchemy Dr. Snyder has been toiling away within his lab. We got a bunch of previously known cuts such as the Iris West/Barry Allen scene. Some great new looks like our first shot of DeSaad, and a whole bunch of beautiful new images, something Snyder is known for. What’s most exciting is that the tone seems entirely different from the theatrical release, and that should give us all hope.

Even though the day WAS filled with memorable moments, I’m not even sure DC FanDome takes place without it. The “Snyder Cut” has indeed been the talk of the DC town for quite some time now and was the big “get” for HBO when they launched their streaming service, “HBO Max”. And there’s no question in my mind this was the main event on Saturday.

Something about conventions and events being virtual now makes them seem more casual, but no less exciting. Special guest Lynda Carter’s surprise appearance at the end of the WW1984 panel fits this mould precisely.

As if just strolling in on a low-key but HYPED conversation about one of the biggest, most anticipated movies of the year, Lynda Carter surprised us all by making her appearance towards the end of the panel in which the new trailer for Wonder Woman 1984 debuted. Panelists Patty Jenkins, Chris Pine, Kristen Wiig, Pedro Pascal, and Gal Gadot were just as shocked as we were to see Lynda, who greeted the panel and fans with all the grace an original Wonder Woman would muster.

Lynda landed the role of Diana Prince in the TV series Wonder Woman in the 1970s. Her earnest performance endeared her to fans and critics, and she continues to be closely identified with the famous superhero. Carter has said: “There is something about the character where in your creative mind for that time in your life where you pretended to be her, or whatever the situation was, that it felt like you could fly.” In 1985, Carter became an honoree in DC Comic’s 50th anniversary publication Fifty Who Made DC Great for her work on the Wonder Woman series.

Lynda seemed genuinely excited to be part of the fanfare and expressed how much she loved the new films. She shared that her daughter told her she finally gets why Wonder Woman is such an inspiration and sang Gal’s praises for her performance.

We already had high hopes for Wonder Woman 1984 but something about Lynda’s enthusiasm certainly rubbed off on us! If the old so warmly endorses the new, by the goddess, we’re even more excited!

Most of DC Fandome focused primarily on the cinematic side of the DC Universe. Rightfully so, as many of those movies looked fantastic. That said, what really caught my eye were the contributions that WB Games Montreal and Rocksteady made to the event.

WB Games debuted the first trailer and gameplay trailer for Gotham Knights. Meanwhile, Rocksteady premiered a cinematic trailer for Kill the Justice League. Both games looked absolutely awesome, but that isn’t where the similarities stop.

Gotham Knights and Suicide Squad: Kill the Justice League are co-op games. This is a complete departure from the previous DC games we’ve come to know. However, it’s one that I am all on board for. I’m so ready to take down some of Gotham’s baddest with my buddies playing as Nightwing. The different movesets and customizable options shown looks amazing. Similarly, the idea of laughing and getting downright demolished with my friends trying to kill the Justice League has me so excited.

Another similarity is that Batman isn’t said to be featured in either of these games. In Gotham Knights, they straight up tell you that Batman is dead. In Suicide Squad, the game is set within the Arkham universe so it’s safe to say that Batman is allegedly dead in that game, as well. Yet, the lack of Batman doesn’t have me all that concerned. In fact, I’m actually very excited for the prospect of playing as these new characters.

Gotham Knights is a 2021 title and Suicide Squad: Kill the Justice League is set for 2022.

BECKY- The Batman Trailer and The Wonder Woman 1984 Trailer

If I had to pick a favorite thing about DC Fandome it would absolutely have to be two of the trailers that were revealed during this event, namely the first trailer for The Batman (coming in 2021) and the newest trailer for Wonder Woman 1984, both of which I absolutely loved.

First, let me talk for a second about how amazing this new trailer for Wonder Woman 1984 is. If I weren’t already sold on this film, this trailer would’ve certainly done the trick, not least because this trailer gives us our best look yet at a live-action Cheetah (who appears to be played to perfection by Kristen Wiig). I like how the film seems to be setting Cheetah up as a partially sympathetic villain. After all, who wouldn’t be jealous of someone like Diana Prince, a woman who appears to have everything one could ever want? I’m beyond excited for this film now.

And then there’s that first teaser trailer for The Batman and oh my gosh, I have so much apologizing to do because for so long I ignored this film and didn’t think it could be any good. Then I saw the trailer and I.Was.Hooked. This is a new kind of Batman film and I am 100% HERE for it. Also, I love that the Riddler is front and center in the trailer instead of Batman vs Joker Part 99. I should mention The Riddler is my favorite Batman villain so I was thrilled to see him have such a central role in the teaser. Best believe I will be seeing this film one way or another in 2021.

Both games from WBGames look to be amazing and different at the same time! Gotham Knights is the first of its kind, offering 1-4 player co-op and will take place after the death of Batman. Suicide Squad: Kill The Justice League may possibly give the option of playing as different Suicide Squad member and looks to be a very exciting experience that we all can’t wait to play!

Now, on to The Batman with Robert Patterson. I had my doubt at the beginning,  but hot damn does this movie look like something right our of the comics! I am only hoping we get to see more villains and craziness than ever before in this film!

There was a lot to love and there’s no denying DC knocked it out of the park with FanDome’s overall presentation. From the reveals, to genuine moments of geeky fun, and the ability to unite fans with a stellar virtual event. We had a blast watching (and covering) it, but now we want to know what YOUR favorite moment of DC FanDome was?