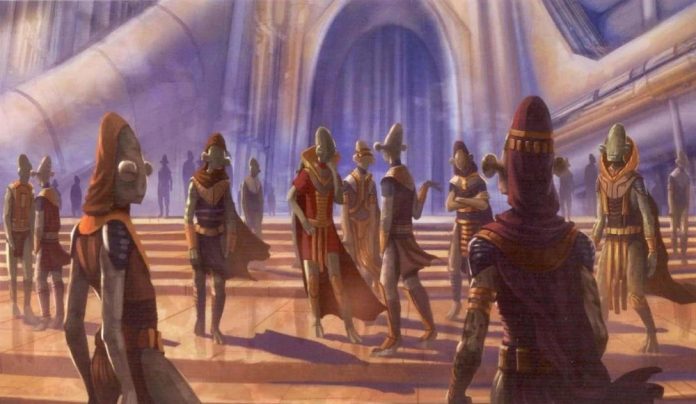 An offhand comment in the latest episode of the Star Wars series, Andor, might leave some viewers with question…and we have answers (canon may vary).

Despite what you may have heard/assumed…Andor has some pretty deep cut Easter eggs that hearken back to some impressive lore. One of the biggest, however, came during today’s new episode. It’s a doozy.

I’ve been dying to talk about this since I saw the fourth episode a few weeks ago, and I can’t tell you how exciting this Easter egg is. And to be clear, this fits most definitely into the pure Easter egg definition. I doubt the object will factor much into the story, and even if it does, the history alluded to it certainly won’t.

Of course, I’m talking about the “Rakatan invaders.”

The mention comes courtesy of Luthen Rael as he’s convincing Andor to take on the job he’s currently offering. When he hands over a kyber crystal as a down payment/assurance for the job, he briefly tells Cassian what it is:

The name is instantly recognizable for Star Wars fans who enjoyed the Legends (Expanded Universe) material, specifically Knights of the Old Republic. This is far from the first time stuff from Bioware’s iconic game have found their way into Canon—something I’ve detailed in the past. Hell, it’s not even the first time Rakata have been mentioned in canon before either!

The planet Rakata Prime popped up randomly on a galaxy map in a The Force Awakens reference book. There’s a mention of the Rakatan Infinite Empire in the Nexus of Power sourcebook for Fantasy Flight’s Star Wars: Force and Destiny role-playing game in 2016. And ancient Rakatan Wraith Boxes were apart of Dryden Vos’ collection in the background of Solo: A Star Wars story.

Even so, Andor marks the first time the ancient species has been directly mentioned on screen with connections to their Legend-ary past. For those not as familiar with the Rakata, it’s canonical implications, or simply need a refresher, consider this your quick explainer.

The “real life” origins of the Rakata are fairly easily traced. They were an amphibian race of humanoids created specifically for the Knights of the Old Republic game. While they didn’t actually appear until the final act of the game’s story, their presence is felt throughout.

They’re ancient. So ancient in fact, even by the time of KOTOR (which takes place almost 4,000 years before the original films) they’re little more than myth and legend. The game continually refers to them as “the builders” and are kept mysterious until the final planet in the game. Pretty much any major technological advancement you can think of in the galaxy far, far away…can be attributed to them in some way. Hell, in some of the stories, they STILL haven’t caught up to what the Rakata were capable of at their height.

Credited as the first species to achieve hyperspace, the Rakata spread their influence throughout the galaxy in what they referred to as the Infinite Empire. Their superior technology and ability to wield the Force made them almost invincible to everyone else in the galaxy (but I’ll talk about that more later on).

Suffice it to say, the Infinite Empire was, in fact, finite. By the time we meet them in KOTOR, they’re on their last gasp and we’re tasked in dealing with the last of their terrible technology. While they were first introduced to fans back in 2003, their influence thereafter was a present part of the Expanded Universe. From the Darth Bane trilogy, to the Fate of the Jedi saga (which essentially closed out Legends in general), to even some mentions in the Empire at War: Forces of Corruption game, the Rakata were getting referenced all over the place.

Their biggest impact, however, came with the Dawn of the Jedi story initiative. Kicking off in 2012, Dawn of the Jedi marked the last era of the old Expanded Universe before the Disney purchase (also in 2012) ultimately marked a new era of canon stories. Even with limited time, Dawn of the Jedi gave fans some pretty exciting stories between a novel (Into the Void) and a comic series that consisted of three, five-issue, miniseries.

Dawn of the Jedi was set nearly 26,000 years before the events of A New Hope, and pretty much served as a chronicle of the Rakatan invasion and how the Jedi predecessors (Je’daii) dealt with them during the “Force War” mentioned in the game. I won’t go into all the details here, but Dawn of the Jedi ruled and one of the things I wished had been expanded on.

So who are the Rakata within the Star Wars universe? The short answer is, they certainly weren’t good guys. In fact, they were pretty awful and actually managed to invade the majority of the galaxy while enslaving just about every race/planet they encountered…Hence the reason they called themselves the Infinite Empire.

By the time we meet them in KOTOR, the Rakata are but a shell of their former selves, and players are given a fairly decent run down of how they fell from grace. Combine that with all the details given in the Dawn of the Jedi comics, and the Rakatan Invasion is surprisingly well documented for a period of time almost 26,000 years before the story we started with.

I won’t go through all the details here (there’s quite a bit), but I’ll give a bit of the basics. The Rakata where a highly advanced race, ALL of whom held a deep connection to the Force. It wasn’t just a select few, as happens with other races/species in the galaxy, but all of them were an inherently Force-sensitive species.

Because of this, they were contacted by an even MORE ancient race, the Kwa, within the galaxy who sought out those who could connect with the Force and take them under their wing. Unfortunately, the Rakata were naturally aggressive (literally feasting on their enemies, and each other) and all about conquest. They took the teachings of the Kwa and inside of finding balance, twisted it to their own devices…fully embracing the Dark Side.

They took the knowledge and technology to embark on a mission of conquest that lasted millennia. The Rakata sought out worlds particularly strong in the Force, enslaving the inhabitants and stripping the planet of all natural resources before moving on and leaving it barren. In fact, they’re the reason Tatooine, once a lush world with flowing water, became a desert planet.

The story of their fall is a familiar one in the history of brutal conquerors. Eventually, they came across a group of people who were not so easily defeated and those they’d enslaved began to fight back. Infighting among each other reached a boiling point as well, and civil war within their own society began tearing them apart.

They kind of imploded. Right as all this is going on, however, they are then devastated by a deadly plague (one likely manufactured by one of their enslave peoples) that decimated their species. No matter what they tried, their scientists couldn’t find a cure. Even worse, the plague also stripped them of their ability to touch the Force—the primary reason for their reign.

Before long, the “Builders” as they became known vanished from the greater galaxy, maintaining a small presence on their homeworld of Lehon. Eventually, the plague thinned their numbers so far, they became primitive, uneven able to even utilize their own technology. Thus, they became planet-bound once more and passed into myth as their legacy brought the galaxy together and eventually to the Republic we all know and love…

“But Jordan,” I hear you saying. “What does this have to do with Andor?” I get it, the Rakatan Invasion reference is relatively small and made in an offhand manner. Going into all this history seems a bit over the top. But the nature of the object Luthen refers to is reason enough to dive into all this.

As you see, Luthen mentions the crystal is a type of kyber. Pretty much everyone is familiar with the Kyber crystals in Star Wars at this point, especially considering it’s importance to the events of Rogue One. They’re the crystals which power Jedi Lightsabers, and were also used in the destructive power of the Death Star (later the Starkiller Base).

This, however, is a different kind of kyber crystal than the normal we’ve heard of, and that’s what makes the reference so intriguing to me. You see, all of the advanced technology the Rakata used to conquer the galaxy was based off the Force. They managed to marry their tech with the Force to create impressive machines/devices; even their hyperdrives. They could only travel to worlds with a significant concentration of the Force (which usually meant a high volume of sentient species).

As we now know, kyber crystals are a crucial element behind channeling the power of the Force into technology (like Lightsabers). With that in mind, Luthen saying this is a “sky stone” from the ancient world makes a much stronger connection to the history already established.

Yes, it might be a more tenuous connection to ALL of this history I’ve detailed, but this reference is the best evidence of their Legends history coming into Canon so far. Crazy to think Andor, of all the shows, would give fans the most direct connection to the Knights of the Old Republic history to date.

I highly doubt we’ll see anything about this crystal expounded on within the rest of Andor, but it’s a cool connection for Star Wars fans nonetheless. If you’re curious to learn more about the Rakata, be sure to hit up those stories I’ve linked to in this article, or check out their detailed background on Wookieepedia.

New episodes of Andor hit Disney+ on every Wednesday.