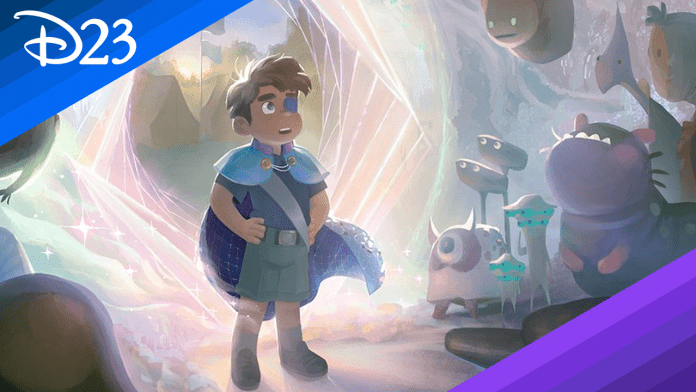 As D23 continues, a number of Disney projects were revealed, along with summaries and teaser images.

Fans had been looking forward to D23 for a while now and yesterday’s Disney panel did not disappoint. A number of films were revealed, many for the first time, and it gives a tantalizing look at what’s to come from Disney and Pixar.

Wish: A film that could only come from Walt Disney Animation Studios, the epic animated musical is inspired by the legacy of films from the studio and asks the question: “How did the wishing star, upon which so many characters wished, come to be?” Directors Chris Buck and Fawn Veerasunthorn outlined the story, which is set in Rosas, the kingdom of wishes where wishes can literally come true. Attendees were introduced to 17-year-old Asha—an optimist with a sharp wit who cares endlessly about her community. In a moment of desperation, Asha makes an impassioned plea to the stars, which is answered by a cosmic force, a little ball of boundless energy called Star. Together, they face the most formidable of foes to save her community and prove that when the will of one courageous human connects with the magic of the stars, wondrous things can happen. Coming Fall 2023.

Mufasa: The Lion King: a prequel to “The Lion King,” won’t release until 2024, but director Barry Jenkins was on hand to show a never-before-seen sneak peek and share a little about the film, which is currently in production. Told in flashbacks—Rafiki, Timon and Pumbaa tell the story of Mufasa to a young lion cub—“Mufasa” reveals the rise of one of the greatest kings of the Pride Lands.

Haunted Mansion: Inspired by the classic theme park attraction, “Haunted Mansion” is about a woman and her son who enlist a motley crew of so-called spiritual experts to help rid their home of supernatural squatters. Coming 2023.

Snow White: A live-action reimagining of the classic tale starring Rachel Zegler in the title role and Gal Gadot as Snow White’s Stepmother, The Queen. Coming 2024.

Peter Pan & Wendy: The new film dives deeper into Wendy’s story as she joins the boy who refuses to grow up on a magical journey to Neverland and reveals the history behind Peter Pan’s rivalry with one of Disney’s most memorable villains. Coming 2023.

Elemental: A story set in a city where fire-, water-, land- and air-residents live together. Ember is a tough and fiery young woman, and Wade is a fun, sappy, go-with-the-flow guy. Coming June 2023.

Win or Lose: The story follows the Pickles, a co-ed middle school softball team, in the week leading up to their championship game. Each episode takes place that same week, highlighting the perspective of a different main character—players, their parents, the umpire—each reflected in a unique visual style. Coming Fall 2023.

Elio: In the story, 11-year-old dreamer Elio is artistic, creative and an avid INdoorsman who finds it hard to fit in. Meanwhile Mom Olga, who runs a top-secret military project, is working to decode a strange signal from outer space. But it’s Elio who makes contact, gets beamed into space and is subsequently mistaken for an intergalactic Ambassador for Earth. Coming Spring 2024.

Iwájú: An all-new original long-form series created in collaboration with Pan-African comic book entertainment company Kugali. Lee invited to the stage Kugali filmmakers Olufikayo Ziki Adeola, Hamid Ibrahim and Tolu Olowofoyeku, who introduced the setting of the series—a love letter to Lagos, Nigeria. Olowofoyeku and Ibrahim described the world of “Iwájú” as a futuristic depiction—a world bursting with color, unique visual elements and technological advancements inspired by the spirit of Lagos, which is physically divided into an island and a mainland separated by both water and socio-economic status. Coming 2023.

Strange World: A film that’s about an incredible family who must get past their differences to save a strange world full of danger and surprises. Coming November 2022.

What do you think of the Disney and Pixar films revealed at D23?