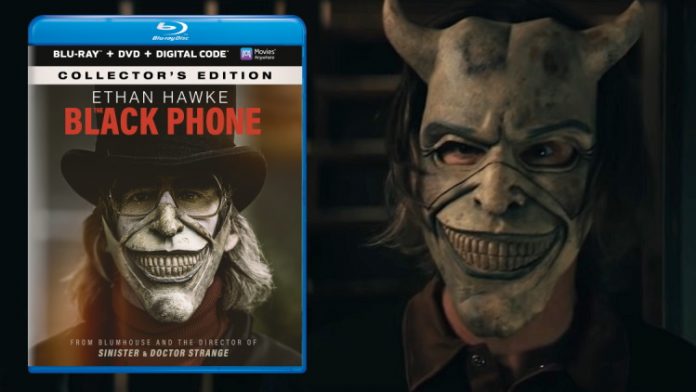 Finney (Mason Thames), a shy 13-year-old boy, is abducted by a sadistic killer dubbed The Grabber (Ethan Hawke) and held in a soundproof basement. When a disconnected phone on the wall begins to ring, however, Finney discovers that he can hear the voices of the killer’s previous victims. And they are dead set on making sure that what happened to them doesn’t happen to Finney. Also stars Madeleine McGraw, Jeremy Davies, and James Ransone. Directed by Scott Derrickson.

Click here to order The Black Phone on Blu-ray from Amazon!

The Black Phone is a throwback to the gritty, psychological horror thrillers of the late 1960s and 1970s, and it makes for one damn entertaining film.

Under the direction of Scott Derrickson (Doctor Strange, Sinister), The Black Phone is atmospheric and menacing, as it follows a child killer preying on a quiet neighborhood that seems naively oblivious to the evil stalking them. Set in 1978, The Black Phone is a departure from current movies that don’t quite “get” the feel of the 1970s in their recreations. Derrickson nails it here, however, and not just in the costumes and visuals. The 70s vibe is authentic, and the kids feel like they wondered in from 1976’s The Bad News Bears, and not the latest CW show.

In the director’s commentary, Derrickson talks about growing up in a quiet Denver neighborhood, and how he incorporated his experiences directly into the characters, story, and settings of the film. His approach works so much better than nostalgic shows like Stranger Things, who overdo the cultural callbacks to the point of parody. While the era is certainly an interesting backdrop, it doesn’t take center stage: that belongs to some outstanding performances from the cast. Give credit also to the brisk pacing by Derrickson, who co-wrote the script with C. Robert Cargill from the short story by horror author Joe Hill.

Mason Thames plays Finney, a 13-year-old in 1978 Denver who is abducted by The Grabber (Hawke) and locked in a soundproof basement. Despite the Grabber’s assurances that he won’t be harmed, Finney knows about kids in the neighborhood who have disappeared in recent months, never to be seen again. Meanwhile, Finney’s sister Gwen (McGraw, in a wonderful performance) has been having dreams filled with premonitions and visions of the kids who have disappeared. When Finney disappears, she puts her “gifts” to work, trying to find her brother before it is too late.

While Finney is locked away in the basement, subjected to a series of mind games by The Grabber, he begins getting calls from a disconnected, abandoned phone on the basement wall. On the other end are the souls of the other child victims of the Grabber, all determined to warn him and give him advice on how to survive. This added layer of the supernatural would feel like a cheesy plot device in the hands of a lesser director, but Derrickson plays it perfectly and makes it all seem plausible, as Gwen plays “psychic detective” in an effort to find him.

As each of the victims interact with Finney, it becomes a bit too obvious how their advice will all come back later in the inevitable confrontation with the Grabber. Still, the final act plays out in a tense, entertaining fashion, with Derrickson ratcheting up the suspense to almost unbearable levels. Rather than going over-the-top in the finale, Derrickson keeps the focus (and the action) contained in the confines of the basement, making for a paralyzingly claustrophobic showdown.

The film is more disturbing than gory, and the subject of murdered kids would usually be a turn-off for most viewers, but Derrickson never goes too dark with the story. If anything, that was one of the film’s few letdowns: Ethan Hawke’s Grabber needed a bit more development, as I felt he never got to unfurl the true evil of his character and really chew up some scenery. Hawke played The Grabber in an understated yet menacing way, but only flashes, it seems, of what he was capable of. Both Thames and McGraw, as Finn and Gwen, are fantastic actors, bringing an authenticity and earnestness to their roles that is unlike so many actors their age. McGraw’s performance in one particularly gut-wrenching scene is jaw-dropping – this kid can act.

The Black Phone doesn’t deliver the devastating horror so many expect these days, but it works as a supernatural thriller that entertains as much as it disturbs. There are a few good jump scares, and Derrickson crafts a memorable villain, which Hawke infuses with a uniquely evil bent. You’ll only wish there was more of it, but things move along at a breakneck pace, so it rarely stays still. The Black Phone is one of the more entertaining horror thrillers of recent memory. Its watchability holds up to multiple viewings, and it’s destined to become a cult favorite that won’t need the Halloween season to be enjoyed.

The Black Phone was shot digitally, but cinematographer Brett Jutkiewicz used anamorphic lenses to gives the film a dated look. The film detail is fantastic, and at times, the film almost looks too good to sell the 70s feel. The colors (and the use of Super 8 film) helps with that, which are often muted and desaturated, with the exception of yellows and deep reds, which pop against the beiges and browns that dominate the palette. Blacks and grays are quite good for a Blu-ray transfer, which is needed, considering so much of the film takes place in a dark basement.

The audio is a 7.1 DTS-HDMA mix, which offers some nuance throughout the channels, with boisterous explosions of screams and bass during jump scares. It’s a good track, although not as impressive as I’d hoped.

A handful of short featurettes and an informative commentary make up the special features on the disc. You’ll get a nice look behind-the-scenes at the making of the film, but you’ll wish the featurettes were more in-depth.

Among the bonus features on the Blu-ray are:

*”Ethan Hawke’s Evil Turn” featurette. Ethan Hawke and the producers discuss the character of The Grabber. Hawke in particular explores how he played the part while wearing a mask for the entire film. Running Time: 4:25

*”Answering The Call: Behind The Scenes Of The Black Phone” featurette. Take a behind-the-scenes look into the most pivotal elements of The Black Phone production, including adapting the story and achieving the vision of director Scott Derrickson. Running Time: 10:40

*”Devil in the Design” featurette. This featurette explores how the production design team perfectly captured the period of the late 1970s, from the set design, to costumes, to hair and makeup. The creation of the Grabber’s masks is also discussed. Running Time: 5:15

*”Super 8 Set” featurette. Cast and crew discuss the use of actual Super 8 film during the “dream sequences,” adding a layer of authenticity and creepiness. Running Time: 1:48

*Audio Commentary. Scott Derrickson provides a lively commentary for his film. Even though he is the only participant, he fills the time with stories from the set, as well as a discussion of his inspirations for the film.

*Digital Copy. A code for a digital copy of the film, compatible with services including Movies Anywhere, VUDU, and AppleTV/iTunes, is included.

Subtitles: English for the Deaf and Hard of Hearing, French, Spanish