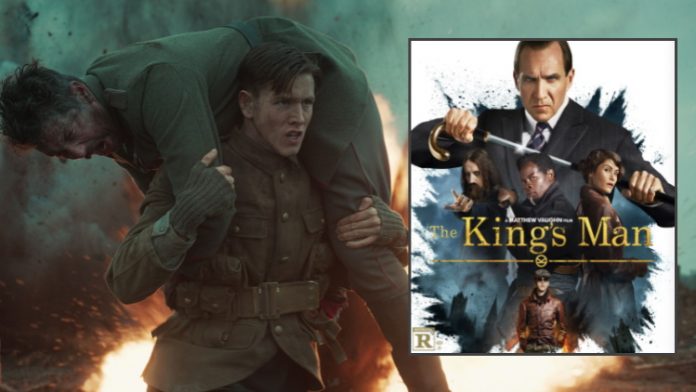 On the eve of World War I, an English nobleman (Ralph Fiennes) suffers a tragic personal loss and creates the Kingsman, the first independent intelligence agency. He soon finds himself matching wits with a mysterious criminal mastermind determined to kill millions and spread chaos across the globe. Also stars Gemma Arterton, Djimon Hounsou, Harris Dickinson, and Rhys Ifans. Written and Directed by Matthew Vaughn.

Matthew Vaughn’s first two Kingsman movies were an entertaining mix of 60’s spy films with modern-day, tech-savvy nihilism, but the formula seemed played out by the end of 2017’s Kingsman: The Golden Circle.

The King’s Man, released late last year, is a welcome shift in the narrative; a prequel dating back to World War I and the origins of the Kingsman agency. Ralph Fiennes is now the lead in the film franchise, playing the Duke of Oxford as he rubs shoulders with historical figures in an attempt to maintain order in the world.

When Archduke Ferdinand of Austria is assassinated and World War I begins, the Duke employs his confidants Shola (Hounsou) and Polly (Arterton) in his spy service, but things get complicated when his young son Conrad (Dickinson) insists on joining the war effort.

The first 2/3 of the film marks a stark contrast in tone from the previous Kingsman films. There’s a definite attempt at a 1917 vibe as director Vaughn introduces historical conflict with more substance over style. The “No Man’s Land” scene is a definite highlight, and I assumed about halfway through that Vaughn intended on grounding the entire picture in somber reality.

The third act, however, reverts to the Kingsman style we’re used to, as the film embraces the over-stylized, improbable action set pieces from the first two installments. It isn’t a bad decision on Vaughn’s part, as the finale is quite entertaining, but it seems out of place and a bit of a letdown from the buildup of the first two acts. I enjoyed the international intrigue and espionage tale Vaughn crafted in the first half of the film, and while I understand the need to satisfy Kingsman fans, I hoped he would have followed through on his approach.

The outstanding cast is often much better than the script they have to work with. Ralph Fiennes makes for a pretty solid action hero, and Djimon Hounsou’s quiet nobility is magnetic – honestly, Hounsou has NEVER had a bad performance. And that includes his appearance in that god-awful Charlie’s Angels reboot with Kristen Stewart.

Tom Hollander (Bird Box) is impressive as he takes on three different key roles (I won’t spoil which ones they are). His performance is often over-the-top and tongue-in-cheek, but he fits the tone of the film, especially when the action ratchets up to outrageous levels in the third act of the film.

The film, however, is absolutely STOLEN by Rhys Ifans, who is creepy cool – and often hilarious – as Rasputin. He also delivers the best fight scene in the picture, but unfortunately, he isn’t the main villain, and therefore, has limited screen time. The movie really needed more of him.

Though The King’s Man aspires to be an epic action-packed historical drama, it doesn’t quite achieve the lofty levels it reaches for. It’s an enjoyable, over-stylized action flick that will leave fans of the previous films satisfied, even if it feels a bit disposable. It doesn’t make any lasting impact, but it’s a cinematic sugar rush that will tide over action junkies until the next installment arrives.

The high definition digital transfer offers a fantastic image, with deep, rich colors and excellent black levels. Filmed digitally with 4K and 6K cameras, I found outstanding detail even in the 2K version I streamed through Movies Anywhere. While I always advocate to watch a film off of disc versus streaming for maximum quality, I wasn’t disappointed with the quality of the digital version at all.

The film sports a distinct vintage look, with a desaturated color palette during the battle scenes in particular, and the transfer handles the color range nicely. During the “No Man’s Land” scene, which takes place at night, I found the blacks to be particularly inky. Shadows showed some impressive detail in the greys, with no blotchy blacks that you often see in inferior transfers. Skin tones were natural and detail was impressive, most notably seen in the costume design.

The audio is a somewhat lackluster Dolby Digital 5.1 mix. An ATMOS mix is available in the 4K version and on disc, but the 5.1 soundtrack seemed flat at times. I expected more low-end and a better bass during the battle scenes. On the plus side, both dialogue and the score are presented with nice clarity.

A documentary and several featurettes are part of the bonus features included with the digital version of the film, and provide an in-depth look behind the scenes.

The bonus features are as follows.

“The King’s Man: The Great Game Begins” Documentary is split into six individual chapters/featurettes on the Movies Anywhere app, and provides an extensive look at the making of the film. On the VUDU app, the documentary is presented as a single, hour-and-a-half documentary. The individual featurettes are:

*”A Generation Lost” Featurette. The actors and filmmakers explore the history of the time period of World War I and how the origin story of the Kingsman spy organization is woven in. Running Time: 11:22

*”Oxfords and Rogues” Featurette. The individual cast members are interviewed and profiled. Ralph Fiennes is among those featured. Running Time: 18:33

*”All the World’s a Stage” Featurette. The production design and crew is featured here. The photography, costumes, and the sets (in particular) are all discussed at length. The recreation of No Man’s Land, on an actual field in Britain and not a set, is of particular interest. Running Time: 26:41

*”Instruments of War” Featurette. The fight scenes, weapons, and various gadgets featured in the film are explored. The props get a lot of love here, and it is interesting to see the attention to detail and authenticity. Running Time: 17:01

*”Long Live the Kingsman” Featurette. The cast and crew give their thoughts on their experience of making The King’s Man. Running Time: 4:11

*”Remembrance and Finding Purpose” Featurette. This featurette highlights The Royal British Legion and Help for Heroes, two U.K.-based resources for recovery, well-being and employment for military veterans. Several veterans who have been helped are interviewed. Running Time: 26:28

*”Recreating the Trenches for ‘The King’s Man’” Featurette. Production Designer Darren Gilford reveals how they recreated World War I trenches for the film. This featurette is exclusive to Movies Anywhere. Running Time: 2:17

Rating: R (for sequences of strong/bloody violence, language, and some sexual material)

Subtitles: English Subtitles for the Deaf and Hard of Hearing, French, Spanish

Click here to order The King’s Man on 4K and Blu-ray from Amazon!

Click here to order The King’s Man on Digital 4K from Amazon!