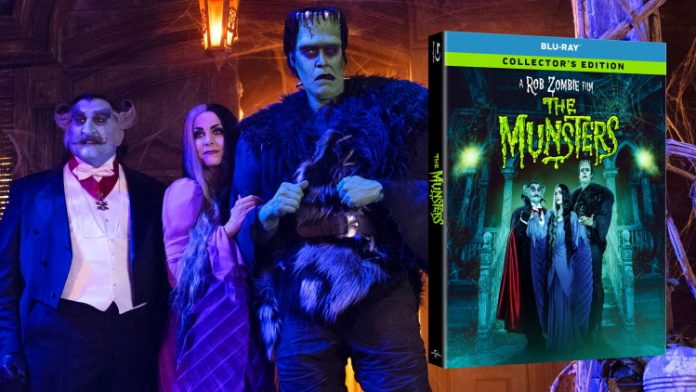 Click here to order The Munsters on Blu-ray from Amazon!

Rob Zombie’s The Munsters is a manic, colorful, but ultimately disappointing tribute to the classic 1960s show that, like Frankenstein’s Monster, cannot assemble interesting individual parts into a cohesive whole.

Zombie, the rocker-turned-filmmaker, is a devoted fan of The Munsters, having watched the series as a child. His appreciation is seen in nearly every frame, as his attention to detail – as well as callbacks to the show and classic Universal monster movies – is impressive. Despite the fantastic set direction and impressive costumes, however, the film lacks the one thing that made the series memorable: a goofy charm that overcame its shortcomings.

It hurts me to admit this, because I really wanted to love this movie. I’m also a life-long fan of Herman and company, and I was excited to see Zombie would make the film as a faithful homage to the original. It’s a family-friendly PG film (a shock for fans of his horror films), and replicates the characters, tone, and humor pretty well. It’s nice to see a reboot that respects the source material, but in this case, that’s also the film’s biggest fault. The slapstick humor and corny puns were tolerable when we were kids, but here, it gets tedious very quickly.

The film isn’t a total disaster, thankfully. The day-glo color scheme and set production are great to look at, and the cast is quite good. You have to credit Rob Zombie with casting actors who he thought best embodied the roles, rather than trying to shoehorn an A-lister into the leads. Although he cast a number of actors he’s worked with a number of times (including his wife Sheri Moon Zombie as Lily), it works, for the most part. Casting Sheri Moon Zombie may have seemed like a nepotistic move, but she’s very good in the role, with hints of Yvonne de Carlo mixed with lots of originality.

Daniel Roebuck is great as the future Grandpa Munster (here just known as The Count), a wisecracking grump who would make Al Lewis proud. Richard Brake is fantastic in multiple roles, often stealing the scene he’s in – his turn as Orlock the Nosferatu-like vampire is hilarious. Jorge Garcia is very good as Floop, the hapless servant of Dr. Wolfgang, as is the legendary Sylvester McCoy (The Seventh Doctor, The Hobbit) as Igor, in an all-too-limited role. Tomas Boykin (as Lester, Lily’s wolfman brother) has a couple of laugh-out-loud lines, and had me wishing he had more material.

However, Jeff Daniel Phillips doesn’t quite click as Herman. He certainly embodies the role physically, and looks great in the makeup, but he just isn’t as endearing as Fred Gwynne. It’s nearly impossible not to compare the two, and Gwynne’s classic rubber face was made for the role, so Phillips had huge shoes to fill. Unfortunately, the script is so haphazard, jumping from one gag to another, that he doesn’t really get to expand on the character much except as a visual gag. His laugh is on point, though; it’s absolutely perfect.

The film gets better as it moves on, particularly when the Munsters go to America and it settles in to the culture-clash, fish-out-of-water humor that worked well in the original series. Before this point, the plot itself is pretty thin: it’s basically a montage of gags exploring Herman and Lily’s courtship, and a storyline about a scheme to hustle The Count’s castle from him. There’s more of a focus on the look and mood and hitting the punchlines than on the characters themselves.

The film at times has a rushed, almost unfinished quality to it, which is not surprising if you listen to Rob Zombie’s audio commentary about the challenges of filming overseas during the pandemic. Even so, the visuals are impressive, and the production made the most out of filing in Hungary, as the sets look fantastic.

I found the editing to be a bit amateurish, cutting too quickly in some scenes, and allowing some shots to linger too long in others. Zombie’s use of a “tilted camera” to give some shots an off-kilter effect is too overdone, and the novelty wears quickly. And yet, even with all of the misses in tone and script, the sense of good-natured fun is consistent. I got a kick out of the constant barrage of nods to classic horror – hardcore fans will love pointing them all out upon viewing – and Munster fans will find a basket full of Easter eggs to enjoy.

As I watched the film, I actually got a call about an upcoming Halloween party I am involved in. It occurred to me that The Munsters is perfect to play on a big TV screen at that Halloween party, as it’s look and feel is suited for group viewing, even if the jokes are groan-worthy. It’s a perfect atmosphere piece, with nothing offensive for younger viewers and plenty of nostalgia for adults.

Perhaps that will be the film’s lasting legacy: it seems destined to be a cult classic, something to take in during Halloween season and have a chuckle or two. Like the original series, it’s an acquired taste, and like the Munsters themselves, the film relishes being the oddball with a distinctly timeless sense of absurdity.

The video transfer is quite good, highlighting nice detail and a bold color representation. The film was captured digitally, as you might expect, and it almost looks too good: rather than having more of a “film” look (at 24 frames per second), it looks like a high-frame rate YouTube video. It’s not necessarily a negative, as lots of people like this look, but it is worth noting.

The film’s bold color palette could have been easily compromised by a poor transfer, with the day-glo colors blurring into a blotchy mess, but thankfully, a high video bit-rate keeps the image solid on the dual-layered Blu-ray. Black and gray levels, which are in abundance, look very good.

It should be noted that The Munsters Blu-ray released day-and-date on Netflix as well. I watched the film on both Netflix and Blu-ray, and I could see a difference in the colors and details with the streaming version, which has a compressed video stream, so the blacks and strong colors look mushy and often pixelate into a blocky mess. I’ve always advocated for buying movies physically on disc for the highest playback quality, and to ensure you’ll always have it available to watch. The Munsters is no exception; the Blu-ray just provides a better viewing experience.

The audio is an excellent DTS-HDMA track, with nice range and clarity and some satisfying low-end at times. Herman’s laugh absolutely bellows in DTS, and it sounds great. The music also comes through in an enveloping presentation through the channels.

The Blu-ray is inexplicably light on bonus features. There’s an audio commentary and a documentary, and that’s it. Not even a digital copy. At least the two special features are great, but it would have been nice to see more.

The special features are as follows:

*‘The Munsters: Return to Mockingbird Lane’ Documentary. This excellent look behind the scenes is just as entertaining as the film. It follows the start of production in Hungary and is structured around a number of interviews with Rob Zombie. There is some great behind-the-scenes footage, and you get to see the amazing attention to detail from the set production crew, who went overboard to give the film a classic gothic look. Running Time: 1 hour, 2 minutes

*Audio Commentary. Writer/director Rob Zombie provides an entertaining commentary, chock full of insights into the production and plenty of stories. He’s incredibly honest about all the challenges the production faced, and he discusses all of his stylistic choices about the film, which many may not agree with, but they can understand his approach.