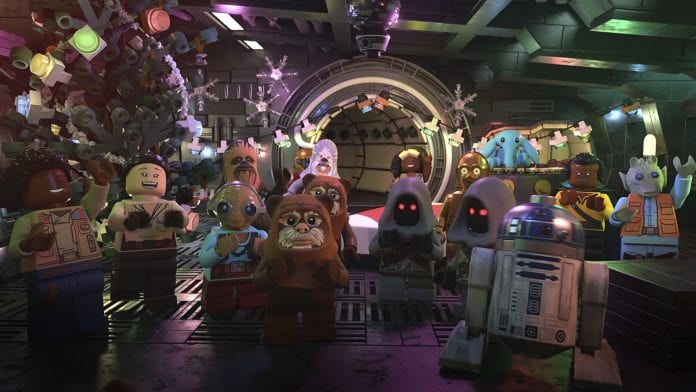 New images and the voice cast have been revealed for the LEGO Star Wars Holiday Special, including some original cast members coming back!

As we learned the other month, November will bring a new Star Wars Holiday Special (in LEGO form) and today we’re getting some confirmations on returning actors lending their voices to the show. The new special will see Kelly Marie Tran, Billy Dee Williams, and Anthony Daniels reprising their characters from the live action films. Actors from The Clone Wars will also be returning to lend their voices to familiar characters: with Matt Lanter, Tom Kane, James Arnold Taylor, and Dee Bradley Baker.

On top of the voice cast announcement, we also have this cheeky poster and new images to enjoy as well:

The LEGO Star Wars Holiday Special” reunites Rey, Finn, Poe, Chewie, Rose and the droids for a joyous feast on Life Day. Rey sets off on a new adventure with BB-8 to gain a deeper knowledge of the Force. At a mysterious Jedi Temple, she is hurled into a cross-timeline adventure through beloved moments in Star Wars cinematic history, coming into contact with Luke Skywalker, Darth Vader, Yoda, Obi-Wan and other iconic heroes and villains from all nine Skywalker saga films. But will she make it back in time for the Life Day feast and learn the true meaning of holiday spirit?