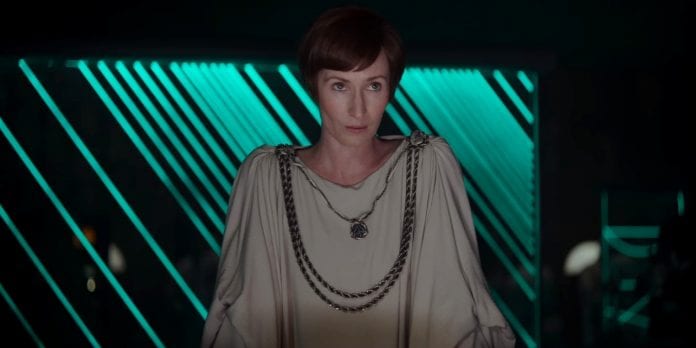 Casting on the next Star Wars live-action series on Disney Plus continues to heat up with another Rogue One star returning, and a shift in showrunners.

The wheels of creativity continue to turn even as the pandemic lingers on. While productions have ceased across the world, people are still furiously working on projects behind the scenes. One of these, is the upcoming Cassian Andor/Rogue One prequel series coming to Disney Plus.

Last week (even though I somehow missed it!) the show added a pair of actors to the show with Stellan Skarsgard and Kyle Stoller in undisclosed roles. Today, THR has another exclusive report that Denise Gough has also been added to the cast. The BEST part, however, is confirmation that Genevieve O’Reilly will return as the Rebel Alliance leader, Mon Mothma!

She played the role originally in Revenge of the Sith, though most of that ended up on the cutting room floor, and then again in Rogue One. Hell, she even provided the voice of Mothma in Star Wars Rebels. She’s excellent, and I’m can’t begin to tell you how excited I am to see she’ll have some part in this show. Makes me wonder if some of the other Rebel commanders we saw in the film will be making appearances as well.

While there’s still no date for filming just yet, the series is expected to arrive in 2021. THR also notes that some behind the scenes shifting has gone on, with Tony Gilroy now stepping into the role of showrunner (previously held by Stephen Schiff). On top of that, Gilroy is expected to direct the first episode at least, possibly more.