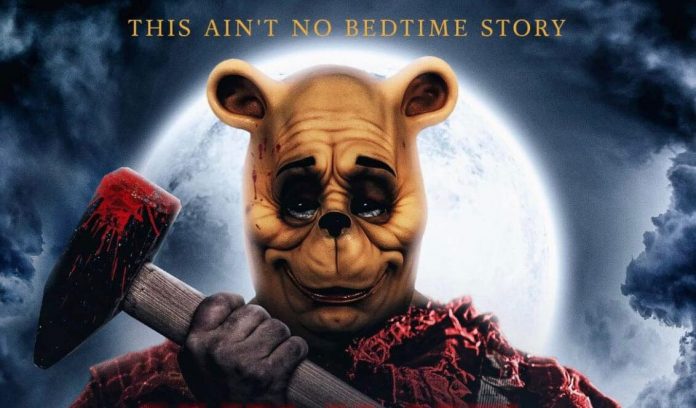 We got a horrifying first look at the official post for the horror film Winnie the Pooh: Blood and Honey.

Dread Central revealed the poster on Thursday showcasing the titular character above Piglet, both looking ready to invade my nightmares.

The film was first revealed in May and Dread Central has spoken with filmmaker Rhys Frake-Waterfield since. Winnie the Pooh: Blood and Honey is being produced jointly by Jagged Edge Productions and ITN Studios. Producers are Frake-Waterfield and Scott Jeffrey, with ITN’s Stuart Alson executive producing. The cast includes Craig David Dowsett as Pooh and Nikolai Leon as Christopher Robin.

The filmmaker says the film takes place years after Christopher Robin has grown up and abandoned his childhood friends, leaving them to starve and die. Frake-Waterfield describes Pooh and Piglet as “hungry and feral,” noting (too nonchalantly) that they resorted to eating Eeyore. Which likely means everyone else in the Hundred Acre Wood.

“Then Christopher returns with his wife to introduce her to his old friend and when that happens they get enraged when they see him and all of their hatred they’ve built up over the years unleasehes and they go on this rampage. That continues until they end up at this rural house with these girls,” Frake-Waterfield said.

When asked about how violent the film would be, Frake-Waterfield said that Pooh and Piglet “don’t have any remorse and they’re acting pretty sadistic,” noting that was the goal with the characters.

“No one has really talked about the dynamic between the two yet. It’s always been just like, you know, Pooh and Piglet.

Frake-Waterfield describes their dynamic as Pooh being the “alpha of the two,” and was in charge of their camp. Piglet is essentially Pooh’s “minion” that does whatever the bear asks of him.

“Over the years they’ve built up these really sadistic tendencies amongst themselves. They used to go out and target people and kill them to eat them as a way of living, just food basically. But now over the years, their minds have become increasingly twisted and it’s gotten to a point where they just enjoy watching their prey suffer a bit. Kind of like a cat with a mouse.”

Frake-Waterfield said at the time that Winnie the Pooh: Blood and Honey  would release “at the latest” in Q4 2022.