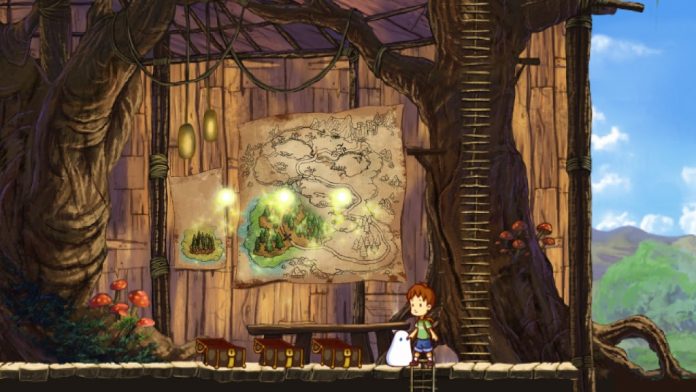 The Wii game, itself a remake/reboot of the original NES game, A Boy and His Blob is making the jump to Nintendo Switch for a new generation of players!

Seems crazy to think it’s taken this long to get A Boy and His Blob (which originally launched in 2009 for the Wii) to come to the Nintendo Switch, but later this year gamers will get the chance to take on this hand-drawn platformer:

A reimagining of the original NES title which was released on Nintendo Wii in 2009 and went on to appear on PlayStation, PS Vita, Xbox, PC, and Mac, A Boy and His Blob is a side-scrolling puzzle platformer beloved by children and adults alike. In the game, the planet of Blobolonia is under threat by an evil Emperor set on world domination. Players control a young boy as he works with his friend, an alien blob-like creature with incredible shapeshifting abilities activated by eating jelly beans. Together the duo attempts to defeat enemies and solve puzzles in order to reach Blobolonia and dethrone the tyrannical Emperor.

“We are delighted to announce this new Switch version of the game, which is just the start of our long-term commitment to the A Boy and His Blob universe,” said Michael Devine, SVP of Business Development at Ziggurat. “Games like Blob only come along once in a great while and we are absolutely thrilled to continue Blob’s journey with our friends at WayForward for new and old audiences alike.”

Experience a heartwarming story told through beautiful hand-drawn and animated illustrations!
Feed the blob jellybeans to activate 15 useful transformations such as the Caramel Cannon, Bubble Gum Bouncer, and classic beans like the Licorice Ladder, Apple Jack, and Tangerine Trampoline.
Traverse woods, swamps, caves, the Blobolonian Outskirts, and even the Emperor’s Citadel through 40 breathtaking levels filled with hidden treasures! Collect treasure to unlock 40 additional challenge levels that will put your skills to the ultimate test!

A Boy and His Blob will launch on Nintendo Switch at some point this Fall.