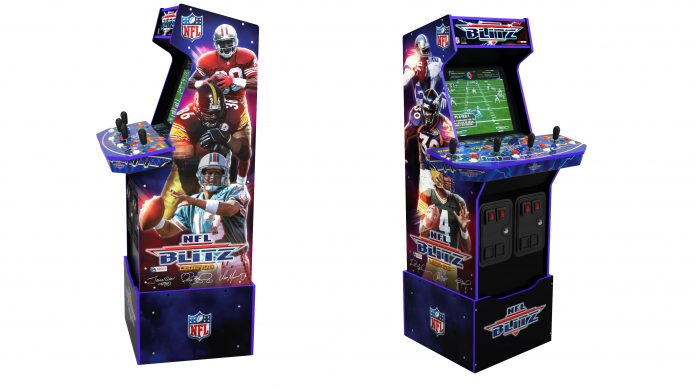 Arcade1Up has revealed their latest arcade cabinet will bring back another classic sports title players haven’t been able to enjoy for a couple decades: NFL Blitz.

Marking their third retro-sports title, today Arcade1Up has announced an NFL Blitz cabinet is joining their line of home machines. Laucnhing this Fall, the cabinet will allow for online multiplayer action and will include three classic titles: NFL Blitz, NFL Blitz ‘99, and NFL Blitz 2000: Gold Edition.

“We could not be more excited to bring NFL Blitz Legends to fans who have been waiting years for the return of this iconic game,” said Scott Bachrach, CEO, Arcade1Up. “Our team spent the better part of the last two years making sure we both honored the games’ past while bringing it up to today’s modern standards with AAA development efforts in partnership with the NFL and FGA, and I think we’ve achieved that in an unbelievable feat of fun, exciting, action-packed gameplay while reengineering the original game.”

For the first time in the Blitz franchise, players can play on a home arcade machine and compete online with Wi-Fi multiplayer and leaderboard. True to the original games, NFL Blitz Legends gets straight to the fun with easy-to-understand gameplay that highlights the best parts of the game including Hail Mary’s, interceptions, sacks and huge rushing yards.

Built to resemble the iconic NFL Blitz found at retro arcades, NFL Blitz Legends is a five-foot-tall arcade machine featuring NFL legends on the sides of the cabinet with retro team logos and uniforms featured in the artwork and gameplay, ensuring an authentic gaming experience. In addition to Wi-Fi multiplayer and leaderboard, the arcade machine has a 17-inch screen with a light-up marquee and 49-way joystick.

Pre-orders for NFL Blitz Legends is live now on Arcade1Up’s site with plans for it to arrive this Fall. So yeah, this would certainly make an ideal Christmas gift…