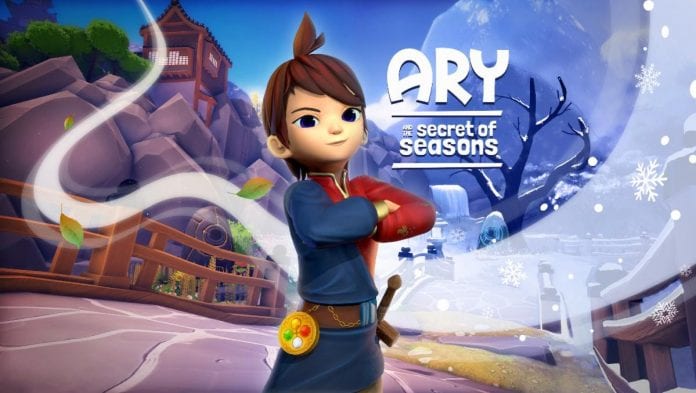 After playing an early build of the game, Ary and the Secret of Seasons manages to be even more impressive than expected, and demands to be played.

I was enamored with Ary when I got my first and very brief look at her and the world she lives in brought to life by the team at eXiin last summer during E3.  I loved the look of Ary as she wielded the seasons — using their powers to save not only the kingdom of Yule, but the entirety of Valdi — and the way that she interacted with the environment to complete the tasks set before her in the Legend of Zelda inspired action-adventure indie title Ary and the Secret of Seasons.

The first portion of the playable preview features the opening of the game where we learn about Ary, how her father’s seat at the throne in the kingdom of Yule fits into the way the world works in Valdi and a handle on the game’s mechanics.

Ary hails from the kingdom of Yule in Valdi and lives in a world of perpetual winter. The other three kingdoms live in perpetuity of the seasons in which they represent as well and  each ruler acts as a Guardian of their respective season with all four kingdoms working together to maintain harmony across the land.

The opening cutscene of the game showcases Ary as the adorable kid she is, playing with her dolls, recreating combat scenes between a powerful Legendary Warrior and a mysterious mage who stole the seasons.

Ary’s spunky attitude and tenacity is captured in the opening of the game alongside some Valdian (Is that a word yet? It is now!) quirks that remain unexplained that caught my eye, like the mysterious Prince Crocus, whom Ary has a poster of plastered on her bedroom wall and you catch a glimpse of briefly in the early portion of the game I had access to.

The lightheartedness of our introduction to the main character shifts and we quickly learn that Ary’s family is reeling from the disappearance of her brother Flynn and that he is assumed to be dead.

Ary’s father is so devastated by the loss of Flynn that he ignores a call to action for all four Guardians to gather following a mysterious and devastating series of events that shakes up the weather in each Kingdom. Yule is thrown into Summer and subsequent chaos.

The first quest in the game is to blatantly go against her family’s wishes — cut Ary’s hair, find her brother’s Guardian apprentice garb and sword, search for her dad’s winter crystal and set off for the Dome of Seasons.

The trek through Yule introduced me to Ary’s hometown, punctuated by side-quests for residents and an introduction to others, like viewing landmarks, that require you to keep an eye out for as you traverse across Valdi.

I was introduced to the game’s combat thanks to some Hyena raiders and fighting in the game is simple: lock-on and attack. Locking on to an enemy reduces camera control significantly and I found that it was somewhat difficult to keep tabs on multiple enemies during a fight if they walked out of my camera-viewing range. As a result, I found myself toggling the lock-on more often than not when fighting groups of three or more enemies.

While the combat in the game is relatively simple, it is juxtaposed nicely alongside the season-shifting abilities which are used to complete platforming challenges, puzzles and to take advantage of strategic weaknesses of your enemies. As you progress through the story, Ary unlocks utility skills and equipment that will further aid her in her journey to save Valdi.

I found myself leaving Yule and heading towards the Dome of Seasons. I came across more side quests and enemies in addition to environmental puzzles on the way.

Merchants punctuated my travels and were happy to trade coin for equipment and upgrades to damage done, movement speed and other core statuses as well, but early in the game I didn’t have the coin to do much with either.

The first stop on the main quest is to investigate some waterfall ruins and subsequently explore the first temple in the game. I only have access to the winter crystal at this point, so the temple puzzles were mainly focused on acclimating me to the mechanic and the different ways it can be utilized in and out of combat.

The crystal’s powers are magnified by black obelisks which punctuate the landscape all over the world, and in the temple these stones are used to alter the environment by adding ice ledges and platforms, and freezing slime enemies into blocks of ice that can be pushed around.

As I delved further into the temple, I stumbled upon horde camps housing the now-familiar hyenas and their allies, defeating them with relative ease. More puzzles and platforming lay ahead and at the end, Ary is rewarded with Pegasus Shoes and the newfound ability to double jump.

With the spoils of the Pegasus Temple collected and new skills acquired, it’s time to find my way out and on towards the Dome of Seasons where I am introduced to the other three Guardians. The first part of my playable demo ended following the cutscene here.

The second half of the preview took me to the Winter Temple, the final temple in the game. Ary is armed with the Winter, Fall and Summer crystals and additional tools, giving the puzzles here more complexity.

The Winter Temple is comprised of two tall towers featuring puzzles requiring platforming adeptness in utilizing three of the season crystals and Ary’s new equipment before ascending to take on the Winter Golem.

The fight against the Winter Golem has been shown in gameplay footage released by developers at events over the years.

The combat mechanics themselves stay simple throughout the game and this late-game boss battle was no different. The encounter required dexterity in platforming and quick utilization of the crystals to beat the clock and chase down the golem before whittling away at his life.

I’ve said it ad nauseam and I’m going to say it one last time (at least): Ary caught my eye amongst the chaos at E3 last summer, I’ve followed its development in the time since and, now that I’ve gotten my hands on the demo, I’m stoked to play through the full game.

The simplicity of the combat mechanics is balanced out by the required puzzle-solving and platforming skills that were utilized in the temples I had access to, leaving me feeling satisfied by the time I got to the end of my playable build.

I was charmed by the silly nuance about little things in the world: Ary’s unexplained (for now) affection for the enigmatic Prince Crocus; the goofy dialogue and great voice acting that brings the wide cast of characters to life, even if the characters don’t seem to be particularly important to the overarching narrative; breadcrumbs left in the opening sequence that had me pondering the importance of the mysterious and powerful hero and how Flynn fits into Ary’s story as the Guardian of Winter.

I’m counting down the days until I get my hands on Ary and the Secret of Seasons when it launches on September 1, 2020, on Nintendo Switch, PlayStation 4, Xbox One and PC.