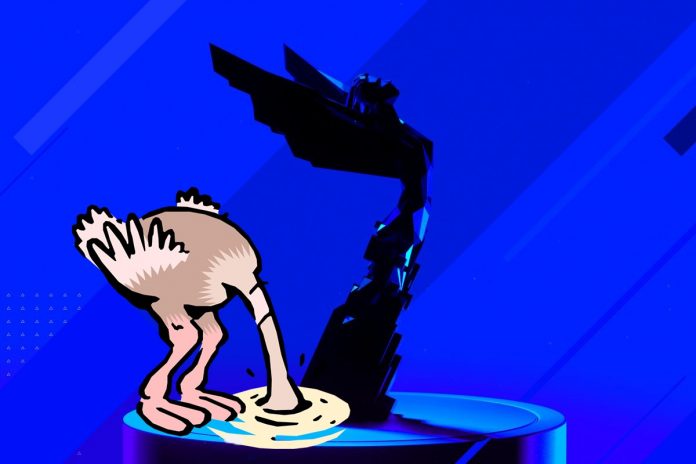 The recent kerfluffle regarding The Game Awards and Keighley’s reluctance to address Activision|Blizzard highlights the issue with “toxic positivity.”

Last night, The Game Awards’ Geoff Keighley came under fire for his remarks about staying neutral regarding Activision|Blizzard. While he’s since clarified those remarks, it’s still indicative of a larger problem with just “focusing on the positives.” Sadly, it’s not a problem specific to the gaming industry.

Things in the world, and society, are not so great right now. It seems everywhere you look, something horrible is going on; some injustice being perpetrated, and wrongs going uncontested. It kinda sucks. As such, it makes sense that there are those who wish to look at the positive side of things, so as to not be mired down by the terrible things.

On the surface, this isn’t necessarily a bad thing. Dwelling too much on the negativity going about is overwhelming. It’s easy to get sucked down into despair, preventing you from doing anything yourself, or even being able to think of ways to help/move forward with certain issues. Too many, however, take the concept well beyond what it should.

But I’m getting ahead of myself here. Let’s talk about The Game Awards and Geoff Keighley’s remarks.

During an interview with the Washington Post about the upcoming awards showcase, the interviewer noted, accurately, that Activision’s President Rob Kostich sits on The Game Awards Advisory Board. Considering the slew of lawsuits that have come out against the gaming company, and the many horrendous accusations (including sexual assault, harassment, death threats, and even more), they asked Keighley how he would deal with that:

Keighley said he is thinking about how to “navigate” the event’s involvement with Activision Blizzard, just as major game publishers have said they are reevaluating their relationships with the company out of concern over the lawsuit’s allegations and those reported in a recent Wall Street Journal article.

“We want to support employees and developers,” said Keighley, who added he supported people coming forward with their stories but also didn’t want to diminish developers’ opportunities to spotlight their games. “We have to think very carefully about how to proceed here.”

Keighley did confirm to the Post that Activision’s Diablo IV and Overwatch 2 wouldn’t make an appearance at the show, but emphasized the importance of game reveals to the event in general. It’s pretty diplomatic/PR speech for, “I’m not taking any sides and just want to keep things positive.”

Even forgetting that the head of Activision is actively involved in The Game Awards overall direction, this is just a ridiculous way to go about things. It shouldn’t be difficult to “navigate” your way to saying years of rampant misconduct is wrong. It makes even less sense considering Keighley had no qualms using his platform (and the show) to call out Konami’s treatment of Hideo Kojima in the past. Hell, recently Geoff himself had called out Ubisoft over their responses to their own misconduct claims.

People weren’t having it. Shortly after the article came out yesterday, people all throughout the industry (from major to minor), as well as prominent reporters who cover the industry came out against Geoff’s remarks. Some who were going to be in attendance at this year’s event even threatened to pull out all together unless Geoff addressed things more directly.

After hours and hours of thousands up on thousands of people rightfully calling out the tone deafness of the remarks, Geoff Keighley took to his Twitter account to make another statement on the matter. There, he confirmed that aside from the nominations, Activision|Blizzard won’t be part of the show:

On one hand, this is good. While still not a direct denouncement of the company and its leader, it’s far better than simply sitting on the fence. Even so, the fact that Keighley essentially had to be pushed into saying this (rather than making it clear in the first place) makes it ring a bit hollow.

Moreso, the whole affair is indicative of a problem with “toxic positivity.” The term is more recent (or at least gained a more recent prominence in conversations), but the idea has been around for a while. Essentially, some people put so much emphasis on the positive side of things, they become completely blind to the very real problems that need to be addressed.

Rather than simply “looking on the bright side,” it’s full on burying your head in the sand and pretending nothing is wrong; there is ONLY the bright side of things. It’s ignorant, shows a distinct lack of empathy, and doesn’t actually help anyone. If anything, this brand of positive thinking actively encourages the status quo.

It’s a problem I’ve seen crop up fairly regularly in various fandoms online. As major issues come to light, whether overt racism, sexual misconduct, or even a simple lack of representation…there is ALWAYS someone who has to chime in with, “why can’t we just have fun?”

Even in regards to the specific events with The Game Awards, there were a number of supporters coming out of the woodwork online with similar thoughts. Some even applauding Keighley for staying out of the conversation with remarks along the lines of, “The Game Awards should just be about the good stuff in the industry and having fun!” Even a few comments about how “The Game Awards shouldn’t be political anyway,” which, if you think decrying years of abuse as being political…well, you’ve got bigger issues going on with you.

Anyway, the reality is that we shouldn’t “just have fun.” The problem with this brand of positivity is there is absolutely no room for nuance, or anything else. It’s either all positive or it’s not worth mentioning.

Unfortunately, this attitude completely erases the fact some people are unable to have fun because of the abuse they’re facing. This is especially true when we’re talking about issues that have been going on for decades. Take Star Wars fandom for example. No amount of focusing on the cool laser swords can erase the fact that actors have been driven off social media due to the hatred/abuse they faced for simply being themselves.

In the same way, women who’ve been dealing with workplace sexism/harassment in gaming can’t simply “positively think” their way to better circumstances when their co-workers have fun in the “Cosby Suite.” This toxic positivity seems to stem exclusively from those who’ve had the privilege to never be in those horrible situations. Keighley’s initial comments point specifically to this point.

Being positive IS a good thing, but not when it’s to the point of ignoring everything else. No one should surround themselves with despair at all times. It’s fully possible to address problems, while STILL emphasizing the ‘good’ aspects. This nuance is lost on too many people. Those seeking to call things out, aren’t merely trying to be party-poopers, but trying to bring awareness to problems ON TOP of all the festivities.

Imagine a movie/game that you really enjoy. More than likely it’s not perfect and has some things you wished it did just a little bit better. Is it wrong to say that? Of course not! You can enjoy something while still acknowledging there’s room for improvement. I mean, if you love a game does that mean you don’t want to see things improve in a sequel?

Yes, we should absolutely celebrate the hard work of the developers in the gaming industry (many of whom are from various underrepresented groups). Doing it without even so much as a mention of the very real problems so many are facing, however, doesn’t feel like we’re actually emphasizing their work and efforts. Without that, it’s a far more selfish endeavor of validating your own opinions on games and taking in the pretty trailers.

Would it be so difficult to come out on stage during The Game Awards with a statement about current affairs in the industry? Even something simple like, “Even as we celebrate the hard work of developers and have fun tonight, we should remember there’s no room for the abuse/misconduct we’ve heard about and those in charge should be leading the change or face consequences.”

Seriously, that’s it. You take 30 seconds to make it clear where you stand, and spend the next couple hours focusing on the good stuff. Sure, I think most of us would like more than that. At the bare minimum, having such a clear stance at one of the largest gaming events of the year would raise greater awareness. At the very least it lets those struggling feel like they’re not alone or being totally ignored.

Frankly, I’m not sure what the right answer to all of this is. All I know, is telling people to “just have fun” or “focus on the positive” things aren’t going to change the problems. There needs to be balance and accountability…Accountability that can only begin when you bring attention to the “negative” stuff rather than turn a blind eye to it.